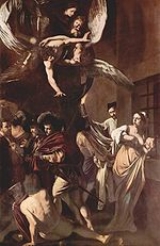 Encyclopedia
The Seven Works of Mercy (Italian
Italian language
Italian is a Romance language spoken mainly in Europe: Italy, Switzerland, San Marino, Vatican City, by minorities in Malta, Monaco, Croatia, Slovenia, France, Libya, Eritrea, and Somalia, and by immigrant communities in the Americas and Australia...
: Sette opere di Misericordia), also known as The Seven Acts of Mercy, is an oil painting by Italian
Italy
Italy , officially the Italian Republic languages]] under the European Charter for Regional or Minority Languages. In each of these, Italy's official name is as follows:;;;;;;;;), is a unitary parliamentary republic in South-Central Europe. To the north it borders France, Switzerland, Austria and...
painter Caravaggio
Caravaggio
Michelangelo Merisi da Caravaggio was an Italian artist active in Rome, Naples, Malta, and Sicily between 1593 and 1610. His paintings, which combine a realistic observation of the human state, both physical and emotional, with a dramatic use of lighting, had a formative influence on the Baroque...
, circa 1607. It is housed in the church of Pio Monte della Misericordia
Pio Monte della Misericordia
thumb|250px|A sculpture at the entrance of the church.The Pio Monte della Misericordia is a church in the historic center of Naples, southern Italy...
in Naples
Naples
Naples is a city in Southern Italy, situated on the country's west coast by the Gulf of Naples. Lying between two notable volcanic regions, Mount Vesuvius and the Phlegraean Fields, it is the capital of the region of Campania and of the province of Naples...
. Originally it was meant to be seven separate panels around the church however Caravaggio produces arguably his greatest masterpiece by combining all seven Works of Mercy
Works of Mercy
The Works of Mercy or Acts of Mercy are actions and practices which Christianity in general, and the Methodist Church, Roman Catholic Church and the Eastern Orthodox Church in particular, consider expectations to be fulfilled by believers, and are a means of grace, which aid in sanctification.The...
in one composition. John Spike
John Spike
John Thomas Spike is an American art historian, curator, and author, specializing in the Italian Renaissance and Baroque periods. He is also a prominent contemporary art critic and past director of the Florence Biennale...
notes that the angel at the center of Caravaggio’s altarpiece transmits the grace that inspires humanity to be merciful.
The Seven Acts of Mercy
1. Bury the dead; In the background two men carry a dead man (you can see his feet)

2 & 3. Visit the imprisoned & Feed the hungry; On the right a daughter visits her imprisoned father and gives him milk from her bosom.

4. Shelter the Homeless; A Pilgrim (you can tell by the shell in his hat 3rd from the left) seeks shelter from an innkeeper on the left.

5. Visit the sick; The beggar being given the robe is crippled and pulls himself along on the ground as St Martin greets him and clothes him.

6. Clothe the naked; St Martin 4th from the left has torn his robe in half and given it to the beggar.

7. Give drink to the thirsty; On the left Samson (second from the left) drinks water from the jawbone of an ass.
John Spike also notes that the choice of Samson as an emblem of Giving Drink to the Thirsty is so peculiar as to demand some explanation. The fearsome scourge of the Philistines was a deeply flawed man who accomplished his heroic tasks through the grace of God. When Samson was in danger of dying of thirst, God gave him water to drink from the jawbone of an ass. It is difficult to square this miracle with an allegory of the Seven Acts of Mercy since it was not in fact the work of human charity.