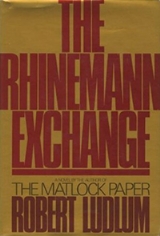 Encyclopedia
The Rhinemann Exchange is a novel of suspense by Robert Ludlum
Robert Ludlum
Robert Ludlum was an American author of 23 thriller novels. The number of his books in print is estimated between 290–500 million copies. They have been published in 33 languages and 40 countries. Ludlum also published books under the pseudonyms Jonathan Ryder and Michael Shepherd.-Life and...
, set in the middle of the Second World War. In 1977, it was made into a television miniseries starring Stephen Collins
Stephen Collins
Stephen Weaver Collins is an American actor, writer, and singer. He is perhaps best known for playing the role of Eric Camden on the long running television series 7th Heaven and more recently as Dr. Dayton King on the ABC TV series No Ordinary Family.-Early life:Collins was born in Des Moines,...
.

On the eve of the Second World War, David Spaulding, a radio voice actor, is recruited by Colonel Ed Pace to run a secret network in Lisbon
Lisbon
Lisbon is the capital city and largest city of Portugal with a population of 545,245 within its administrative limits on a land area of . The urban area of Lisbon extends beyond the administrative city limits with a population of 3 million on an area of , making it the 9th most populous urban...
.

The plot advances to 1943. Both the Allies
Allies of World War II
The Allies of World War II were the countries that opposed the Axis powers during the Second World War . Former Axis states contributing to the Allied victory are not considered Allied states...
and the Axis find themselves facing key shortages that impede their ability to win the war. The Allies lack gyroscopes capable of operating at high altitudes; thus they are losing an unacceptably high number of bombers. If they do not procure gyroscopes soon, the D-Day invasion of Normandy
Normandy
Normandy is a geographical region corresponding to the former Duchy of Normandy. It is in France.The continental territory covers 30,627 km² and forms the preponderant part of Normandy and roughly 5% of the territory of France. It is divided for administrative purposes into two régions:...
will need to be postponed. The Germans find themselves without high quality diamonds, which are necessary for the rocket
Rocket
A rocket is a missile, spacecraft, aircraft or other vehicle which obtains thrust from a rocket engine. In all rockets, the exhaust is formed entirely from propellants carried within the rocket before use. Rocket engines work by action and reaction...
development program at Peenemünde
Peenemünde
The Peenemünde Army Research Center was founded in 1937 as one of five military proving grounds under the Army Weapons Office ....
.

Ironically, each side has what the other needs: the Allies control access to high quality diamonds from the Belgian Congo
Belgian Congo
The Belgian Congo was the formal title of present-day Democratic Republic of the Congo between King Leopold II's formal relinquishment of his personal control over the state to Belgium on 15 November 1908, and Congolese independence on 30 June 1960.-Congo Free State, 1884–1908:Until the latter...
; the Germans have a design for a gyroscope able to operate at high altitudes. The German intelligence agency, the Nachrichtendienst
Nachrichtendienst
Nachrichtendienst may refer to:*Allgemeiner Deutscher Nachrichtendienst, German Democratic Republic state news agency*Militärischer Nachrichtendienst, Swiss military intelligence agency*Strategischer Nachrichtendienst, Swiss foreign intelligence agency...
, discovers that the Allies are in need of gyroscopes, and proposes an exchange, to take place in neutral territory: Buenos Aires
Buenos Aires
Buenos Aires is the capital and largest city of Argentina, and the second-largest metropolitan area in South America, after São Paulo. It is located on the western shore of the estuary of the Río de la Plata, on the southeastern coast of the South American continent...
, Argentina
Argentina
Argentina , officially the Argentine Republic , is the second largest country in South America by land area, after Brazil. It is constituted as a federation of 23 provinces and an autonomous city, Buenos Aires...
.

David Spaulding has, in the meantime, become an invaluable spy for the Allies. His Lisbon network ferries agents and defectors back and forth from German occupied territory. He is selected, however, to oversee the receipt of the gyroscopes - critically, he does not know that diamonds are being exchanged for the gyroscopes.

The Germans select the exiled industrialist Erich Rhinemann to supervise the exchange at their end. He is a clever choice because, although he is Jewish, he is committed to German victory and believes that he will be welcomed back after a German victory. Rhinemann is immensely influential and powerful in Buenos Aires.

Although puzzled at his assignment away from Lisbon, Spaulding accepts his new assignment. However, there are several attempts made on his life: one occurring at an airfield in the Azores
Azores
The Archipelago of the Azores is composed of nine volcanic islands situated in the middle of the North Atlantic Ocean, and is located about west from Lisbon and about east from the east coast of North America. The islands, and their economic exclusion zone, form the Autonomous Region of the...
, another in New York City
New York City
New York is the most populous city in the United States and the center of the New York Metropolitan Area, one of the most populous metropolitan areas in the world. New York exerts a significant impact upon global commerce, finance, media, art, fashion, research, technology, education, and...
. While he is in New York, awaiting details on his assignment, he encounters an old flame, Leslie Jenner Hawkwood who, having drawn him away from his apartment, seemingly vanishes into thin air. Spaulding's mentor, Ed Pace, is meanwhile murdered.

Upon arrival in Buenos Aires, Spaulding meets and falls in love with Jean Cameron, a woman employed by the embassy. Attacks on him continue, and he suspects he is being trailed by the Gestapo
Gestapo
The Gestapo was the official secret police of Nazi Germany. Beginning on 20 April 1934, it was under the administration of the SS leader Heinrich Himmler in his position as Chief of German Police...
. He meets with Rhinemann to acquire the gyroscopes, but tries to draw out his mysterious assailants - Rhinemann and the other Germans are adamant that the Gestapo is not active in Buenos Aires.

To his profound shock, Spaulding discovers that the people trying to stop him work for the Haganah
Haganah
Haganah was a Jewish paramilitary organization in what was then the British Mandate of Palestine from 1920 to 1948, which later became the core of the Israel Defense Forces.- Origins :...
, a Jewish terrorist group set on stopping the exchange. When he captures Asher Feld, the Haganah leader, Feld informs him that he is a party to an exchange of diamonds for gyroscopes. From then on, Spaulding decides that the exchange must be stopped. He pretends to carry out his end, all the while facilitating a Haganah attack on Rhinemann's estate. Spaulding succeeds in killing Rhinemann (who had planned to kill him after the exchange) and Rhinemann's Nazi controller. Having acquired incriminating evidence about the exchange, Spaulding blackmails the Americans who had arranged it and arranges to retire with his beloved Jean.


Characters in "The Rhinemann Exchange"