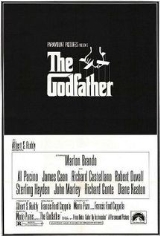 Overview
The Godfather is a 1972 American epic crime film
Crime film
Crime films are films which focus on the lives of criminals. The stylistic approach to a crime film varies from realistic portrayals of real-life criminal figures, to the far-fetched evil doings of imaginary arch-villains. Criminal acts are almost always glorified in these movies.- Plays and films...
directed by Francis Ford Coppola
Francis Ford Coppola
Francis Ford Coppola is an American film director, producer and screenwriter. He is widely acclaimed as one of Hollywood's most innovative and influential film directors...
, based on the 1969 novel
The Godfather (novel)
The Godfather is a crime novel written by Italian American author Mario Puzo, originally published in 1969 by G. P. Putnam's Sons. It details the story of a fictitious Sicilian Mafia family based in New York City and headed by Don Vito Corleone, who became synonymous with the Italian Mafia...
by Mario Puzo
Mario Puzo
Mario Gianluigi Puzo was an American author and screenwriter, known for his novels about the Mafia, including The Godfather , which he later co-adapted into a film by Francis Ford Coppola...
. With a screenplay
Screenplay
A screenplay or script is a written work that is made especially for a film or television program. Screenplays can be original works or adaptations from existing pieces of writing. In them, the movement, actions, expression, and dialogues of the characters are also narrated...
by Puzo, Coppola and an uncredited Robert Towne
Robert Towne
Robert Towne is an American screenwriter and director. His most notable work may be his Academy Award-winning original screenplay for Roman Polanski's Chinatown .-Film:...
, the film stars Marlon Brando
Marlon Brando
Marlon Brando, Jr. was an American movie star and political activist. "Unchallenged as the most important actor in modern American Cinema" according to the St...
, Al Pacino
Al Pacino
Alfredo James "Al" Pacino is an American film and stage actor and director. He is famous for playing mobsters, including Michael Corleone in The Godfather trilogy, Tony Montana in Scarface, Alphonse "Big Boy" Caprice in Dick Tracy and Carlito Brigante in Carlito's Way, though he has also appeared...
, James Caan
James Caan
James Caan is an American actor. He is best known for his starring roles in The Godfather, Thief, Misery, A Bridge Too Far, Brian's Song, Rollerball, Kiss Me Goodbye, Elf, and El Dorado...
, Robert Duvall
Robert Duvall
Robert Selden Duvall is an American actor and director. He has won an Academy Award, two Emmy Awards, four Golden Globe Awards and a BAFTA over the course of his career....
, Sterling Hayden
Sterling Hayden
Sterling Hayden was an American actor and author. For most of his career as a leading man, he specialized in westerns and film noir, such as Johnny Guitar, The Asphalt Jungle and The Killing. Later on he became noted as a character actor for such roles as Gen. Jack D. Ripper in Dr...
, John Marley
John Marley
John Marley was an American actor who was known for his role as Phil Cavalleri in Love Story and as Jack Woltz— the defiant film mogul who awakens to find the severed head of his prized horse in his bed—in The Godfather...
, Richard Conte
Richard Conte
Richard Conte was an American actor. He appeared in numerous films from the 1940s through 1970s, including I'll Cry Tomorrow and The Godfather.-Life and career:...
and Diane Keaton
Diane Keaton
Diane Keaton is an American film actress, director, producer, and screenwriter. Keaton began her career on stage, and made her screen debut in 1970...
, and features John Cazale
John Cazale
John Holland Cazale , was an American film and theater actor. During his six-year film career he appeared in five films, each of which was nominated for the Academy Award for Best Picture: The Godfather, The Conversation, The Godfather Part II, Dog Day Afternoon and The Deer Hunter.From his...
, Talia Shire
Talia Shire
Talia Shire is an American actress most known for her roles as Connie Corleone in The Godfather films and Adrian Balboa in the Rocky series.-Personal life:...
, and Abe Vigoda
Abe Vigoda
Abe Vigoda is an American movie and television actor. Vigoda is well known for his portrayal of Sal Tessio in The Godfather, and for his portrayal of Detective Sgt. Phil Fish on the sitcom television series Barney Miller from 1975–1977 and on its spinoff show Fish that aired from February 1977 to...
. The story, spanning the years 1945 to 1955, chronicles the experiences of the Italian-American Corleone family
Corleone family
The Corleone family is a fictional Sicilian Mafia family settled in New York City. The family was created by Mario Puzo and appears in his 1969 novel The Godfather, as well as the acclaimed film trilogy of the same name directed by Francis Ford Coppola. The family was founded by Vito Corleone , who...
. Two sequels followed: The Godfather Part II
The Godfather Part II
The Godfather Part II is a 1974 American gangster film directed by Francis Ford Coppola from a script co-written with Mario Puzo. The film is both a sequel and a prequel to The Godfather, chronicling the story of the Corleone family following the events of the first film while also depicting the...
in 1974, and The Godfather Part III
The Godfather Part III
The Godfather Part III is a 1990 American gangster film written by Mario Puzo and Francis Ford Coppola, and directed by Coppola. It completes the story of Michael Corleone, a Mafia kingpin who tries to legitimize his criminal empire...
in 1990.

[Speaking to Tom Hagen after Sonny is killed] I want no inquiries made. I want no acts of vengeance. I want you to arrange a meeting with the heads of the Five Families. This war stops now.

[Talking to Johnny Fontane about Jack Woltz] I'm going to make him an offer he can't refuse.

Never hate your enemies. It clouds your judgment.

Leave the gun, take the cannoli.