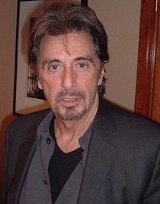 Overview
Alfredo James "Al" Pacino (born April 25, 1940) is an American film and stage actor and director. He is famous for playing mobsters, including Michael Corleone
Michael Corleone
Michael Corleone is a fictional character in Mario Puzo's novels, The Godfather and The Sicilian. He is also the main character of the Godfather film trilogy that was directed by Francis Ford Coppola, in which he was portrayed by Al Pacino, who was twice nominated for an Academy Award for his...
in The Godfather
The Godfather
The Godfather is a 1972 American epic crime film directed by Francis Ford Coppola, based on the 1969 novel by Mario Puzo. With a screenplay by Puzo, Coppola and an uncredited Robert Towne, the film stars Marlon Brando, Al Pacino, James Caan, Robert Duvall, Sterling Hayden, John Marley, Richard...
trilogy, Tony Montana
Tony Montana
Antonio Raimundo "Tony" Montana is a fictional character from the 1983 film Scarface. He is portrayed by Al Pacino in the movie, and is voiced by André Sogliuzzo in the 2006 video game Scarface: The World Is Yours. Tony Montana has become a cultural icon and is one of the most famous movie...
in Scarface
Scarface (1983 film)
Scarface is a 1983 American epic crime drama movie directed by Brian De Palma, written by Oliver Stone, produced by Martin Bregman and starring Al Pacino as Tony Montana...
, Alphonse "Big Boy" Caprice in Dick Tracy and Carlito Brigante
Carlito Brigante
Carlito Brigante is the eponymous character from Carlito's Way and After Hours, novels by Edwin Torres. Torres has stated that Brigante was a combination of several men he knew in his street days, as well as a compilation of several of his own personal characteristics.Born in 1930 in Spanish...
in Carlito's Way
Carlito's Way
Carlito's Way is a 1993 crime film directed by Brian De Palma, based on the novels Carlito's Way and After Hours by Judge Edwin Torres. The film adaptation was scripted by David Koepp. It stars Al Pacino, Sean Penn, Penelope Ann Miller, Luis Guzman, John Leguizamo, Jorge Porcel, Joseph Siravo, and...
, though he has also appeared several times on the other side of the law — as a police officer, detective and a lawyer.

Off-Off-Broadway is absolutely necessary. It doesn't have to be sanctioned by the state, subsidized or anything. The plank and the passion is what it's about.

The greatest theatre that I experienced in my life was The Living Theatre and they were Off-Off-Broadway. And that was in the fifties.