Encyclopedia
A Thames skiff is a traditional River Thames
River Thames
The River Thames flows through southern England. It is the longest river entirely in England and the second longest in the United Kingdom. While it is best known because its lower reaches flow through central London, the river flows alongside several other towns and cities, including Oxford,...
wooden rowing boat used for the activity of Skiffing
Skiffing
Skiffing refers to the sporting and leisure activity of rowing a Thames skiff. A Thames skiff is a traditional hand built clinker-built wooden craft of a design which has been seen on the River Thames and other waterways in England and other countries for nearly 200 years...
. These boats evolved from Thames wherries
Wherry
A wherry is a type of boat that was traditionally used for carrying cargo or passengers on rivers and canals in England, and is particularly associated with the River Thames and also with the Broadland rivers of Norfolk and Suffolk. London passenger wherries evolved into the Thames skiff, a...
in the Victorian era
Victorian era
The Victorian era of British history was the period of Queen Victoria's reign from 20 June 1837 until her death on 22 January 1901. It was a long period of peace, prosperity, refined sensibilities and national self-confidence...
to meet a passion for river exploration and leisure outings on the water.


Construction of a skiff 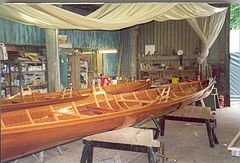 The Thames skiff
Skiff
The term skiff is used for a number of essentially unrelated styles of small boat. The word is related to ship and has a complicated etymology: "skiff" comes from the Middle English skif, which derives from the Old French esquif, which in turn derives from the Old Italian schifo, which is itself of...
owes its origins to the viking
Viking
The term Viking is customarily used to refer to the Norse explorers, warriors, merchants, and pirates who raided, traded, explored and settled in wide areas of Europe, Asia and the North Atlantic islands from the late 8th to the mid-11th century.These Norsemen used their famed longships to...
boat building
Boat building
Boat building, one of the oldest branches of engineering, is concerned with constructing the hulls of boats and, for sailboats, the masts, spars and rigging.-Parts:* Bow - the front and generally sharp end of the hull...
method of over-lapping timber planking known as clinker
Clinker (boat building)
Clinker building is a method of constructing hulls of boats and ships by fixing wooden planks and, in the early nineteenth century, iron plates to each other so that the planks overlap along their edges. The overlapping joint is called a land. In any but a very small boat, the individual planks...
construction.
Many of the terms used for parts of the skiff are of Scandinavian origin – “tholes”, “thwart
Thwart
A thwart is a strut placed crosswise in a ship or boat, to brace it crosswise.In rowboats it can also serve as a seat for a rower....
s”, and “sax”. Planks on either side of a wooden keel
Keel
In boats and ships, keel can refer to either of two parts: a structural element, or a hydrodynamic element. These parts overlap. As the laying down of the keel is the initial step in construction of a ship, in British and American shipbuilding traditions the construction is dated from this event...
are laid down following the outline of a sham (temporary pattern) placed across the keel. The planks are nailed in place and then a strengthening framework of ribs is added. Oars (or blades) are held in place by wooden thole pins at the side of the boat rather than rollocks or outriggers. The thole pins are designed to give way if too much pressure is put on them, thus protecting the boat itself from damage. The thwart, or seat, is fixed rather than sliding as in modern boats. The sax runs round the top of the boat to strengthen and protect it. Blades are made of wood with leather collars.

Skiffs usually provide for one or two sculler
Sculling
Sculling generally refers to a method of using oars to propel watercraft in which the oar or oars touch the water on both the port and starboard sides of the craft, or over the stern...
s but because they have been built to individual customer's specifications, there can be a wide variety of designs. There are skiffs with three or four rowing positions. Skiffs with more than one sculler have a seat for a coxswain
Coxswain
The coxswain is the person in charge of a boat, particularly its navigation and steering. The etymology of the word gives us a literal meaning of "boat servant" since it comes from cox, a coxboat or other small vessel kept aboard a ship, and swain, which can be rendered as boy, in authority. ...
who steers the boat by ropes attached to a rudder
Rudder
A rudder is a device used to steer a ship, boat, submarine, hovercraft, aircraft or other conveyance that moves through a medium . On an aircraft the rudder is used primarily to counter adverse yaw and p-factor and is not the primary control used to turn the airplane...
. Single scullers usually steer themselves, but some single skiffs allow for a cox/passenger as well. Some skiffs also provide for a sail to be used.

Skiffs following the traditional Thames design are to be found in The Netherlands and Argentina
Argentina
Argentina , officially the Argentine Republic , is the second largest country in South America by land area, after Brazil. It is constituted as a federation of 23 provinces and an autonomous city, Buenos Aires...
, although Argentinian skiffs usually have outriggers instead of tholes.


Uses and types of Skiff

Skiffs are both recreational and working boats on the Thames. They can be seen used for swan upping
Swan Upping
Swan Upping is an annual ceremonial and practical activity in Britain in which mute swans on the River Thames are rounded up, caught, marked, and then released....
and other general purpose duties. Racing skiffs are specially built for skiffing in competitions at regatta
Regatta
A regatta is a series of boat races. The term typically describes racing events of rowed or sailed water craft, although some powerboat race series are also called regattas...
s and long distance events and also for recreational purposes. A camping skiff has an easily erectable canvas
Canvas
Canvas is an extremely heavy-duty plain-woven fabric used for making sails, tents, marquees, backpacks, and other items for which sturdiness is required. It is also popularly used by artists as a painting surface, typically stretched across a wooden frame...
cover and is used for outdoor recreational activity holidays, often in conjunction with other activities such as walking, swimming and fishing. The cover can be used for shelter from the sun and rain during the day and at night converts the entire craft into a floating tent. It enables the occupants to experience nature and river life up close and is featured in Jerome K. Jerome
Jerome K. Jerome
Jerome Klapka Jerome was an English writer and humorist, best known for the humorous travelogue Three Men in a Boat.Jerome was born in Caldmore, Walsall, England, and was brought up in poverty in London...
's 1889 comic novel Three Men In A Boat
Three Men in a Boat
Three Men in a Boat ,The Penguin edition punctuates the title differently: Three Men in a Boat: To Say Nothing of the Dog! published in 1889, is a humorous account by Jerome K...
.