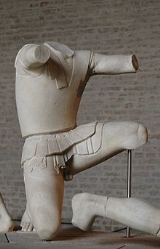 Encyclopedia
In Greek mythology
Greek mythology
Greek mythology is the body of myths and legends belonging to the ancient Greeks, concerning their gods and heroes, the nature of the world, and the origins and significance of their own cult and ritual practices. They were a part of religion in ancient Greece...
Teucer, also Teucrus or Teucris , was the son of King Telamon
Telamon
In Greek mythology, Telamon , son of the king Aeacus, of Aegina, and Endeis and brother of Peleus, accompanied Jason as one of his Argonauts, and was present at the hunt for the Calydonian Boar. In the Iliad he was the father of Greek heroes Ajax the Great and Teucer the Archer by different...
of Salamis Island
Salamis Island
Salamis , is the largest Greek island in the Saronic Gulf, about 1 nautical mile off-coast from Piraeus and about 16 km west of Athens. The chief city, Salamina , lies in the west-facing core of the crescent on Salamis Bay, which opens into the Saronic Gulf...
and his second wife Hesione
Hesione
In Greek mythology and later art, the name Hesione refers to various mythological figures, of which the Trojan princess Hesione is known most.-Princess Hesione of Troy:...
, daughter of King Laomedon
Laomedon
In Greek mythology, Laomedon was a Trojan king, son of Ilus, brother of Ganymede and Assaracus, and father of Priam, Astyoche, Lampus, Hicetaon, Clytius, Cilla, Proclia, Aethilla, Medesicaste, Clytodora, and Hesione...
of Troy
Troy
Troy was a city, both factual and legendary, located in northwest Anatolia in what is now Turkey, southeast of the Dardanelles and beside Mount Ida...
. He fought alongside his half-brother, Ajax
Ajax (mythology)
Ajax or Aias was a mythological Greek hero, the son of Telamon and Periboea and king of Salamis. He plays an important role in Homer's Iliad and in the Epic Cycle, a series of epic poems about the Trojan War. To distinguish him from Ajax, son of Oileus , he is called "Telamonian Ajax," "Greater...
, in the Trojan War
Trojan War
In Greek mythology, the Trojan War was waged against the city of Troy by the Achaeans after Paris of Troy took Helen from her husband Menelaus, the king of Sparta. The war is among the most important events in Greek mythology and was narrated in many works of Greek literature, including the Iliad...
and is the legendary founder of the city Salamis
Salamis, Cyprus
Salamis was an ancient Greek city-state on the east coast of Cyprus, at the mouth of the river Pedieos, 6 km north of modern Famagusta. According to tradition the founder of Salamis was Teucer, son of Telamon, who could not return home after the Trojan war because he had failed to avenge his...
on Cyprus
Cyprus
Cyprus , officially the Republic of Cyprus , is a Eurasian island country, member of the European Union, in the Eastern Mediterranean, east of Greece, south of Turkey, west of Syria and north of Egypt. It is the third largest island in the Mediterranean Sea.The earliest known human activity on the...
. Through his mother, Teucer was the nephew of King Priam
Priam
Priam was the king of Troy during the Trojan War and youngest son of Laomedon. Modern scholars derive his name from the Luwian compound Priimuua, which means "exceptionally courageous".- Marriage and issue :...
of Troy and so the cousin of Hector
Hector
In Greek mythology, Hectōr , or Hektōr, is a Trojan prince and the greatest fighter for Troy in the Trojan War. As the first-born son of King Priam and Queen Hecuba, a descendant of Dardanus, who lived under Mount Ida, and of Tros, the founder of Troy, he was a prince of the royal house and the...
and Paris
Paris (mythology)
Paris , the son of Priam, king of Troy, appears in a number of Greek legends. Probably the best-known was his elopement with Helen, queen of Sparta, this being one of the immediate causes of the Trojan War...
- all of whom he fought against in the Trojan War.

During the Trojan War, Teucer was mainly a great archer who loosed his shafts behind the giant shield of his half-brother Ajax the Great. When Hector
Hector
In Greek mythology, Hectōr , or Hektōr, is a Trojan prince and the greatest fighter for Troy in the Trojan War. As the first-born son of King Priam and Queen Hecuba, a descendant of Dardanus, who lived under Mount Ida, and of Tros, the founder of Troy, he was a prince of the royal house and the...
was driving the Achaeans back toward their ships, Teucer gave the Argives some success by killing many of the charging Trojans, including Hector's charioteer, Archeptolemus son of Iphitos
Iphitos
Iphitos , also Iphitus, was a name attributed to five individuals in Greek mythology.*Iphitos was the son of Eurytus, king of Oechalia, and a descendant of Oxylus. After defeating Eurytus in an archery contest, Heracles was accused of stealing Eurytus's cattle as revenge because he was not given...
. However every time he shot an arrow at Hector, Apollo
Apollo
Apollo is one of the most important and complex of the Olympian deities in Greek and Roman mythology...
, the protector of the Trojans, would foil the shot - an ironic reference to the fact that Apollo would guide Paris' arrow into Achilles' heel. At one point, in his rage at Teucer's success, Hector picked up a huge rock, and flung it at Teucer. The rock injured Teucer, so that he should retire from the fighting for a certain period of time. He does take up a spear to fight in the war after his bow is broken by Zeus. He once again challenged Hector, and he narrowly avoided the path of Hector's flying javelin in the ensuing battle. He was also one of the Danaans to enter the Trojan Horse
Trojan Horse
The Trojan Horse is a tale from the Trojan War about the stratagem that allowed the Greeks finally to enter the city of Troy and end the conflict. In the canonical version, after a fruitless 10-year siege, the Greeks constructed a huge wooden horse, and hid a select force of men inside...
. In total, Teucer slew thirty Trojans during the war; of those Homer mentions Aretaon, Orsilochus, Ormenus, Ophelestes, Daetor, Chromius, Lycophontes, Amopaon, Melanippus, Prothoon and Periphetes, as well as the aforementioned Archeptolemus. He also wounded Glaucus
Glaucus (soldier)
Glaucus was a son of Hippolochus and a grandson of Bellerophon. He was a captain in the Lycian army under the command of his close friend and cousin Sarpedon. The Lycians in the Trojan War were allies of Troy...
, son of Hippolochus
Hippolochus
Hippolochus was a Macedonian writer, a student of Theophrastus, who addressed to his fellow-student Lynceus of Samos a description of a wedding feast in Macedon in the early 3rd century BC. The bridegroom was a certain Caranus, probably a relative of the Caranus who had been a companion of...
.

Because of his half-brother's suicide, Teucer stood trial by his father where Teucer was found guilty of negligence for not bringing his dead half-brother's body or his arms back to him. He was disowned by his father, wasn't allowed back on Salamis Island, and set out to find a new home. His departing words were immortalised in the seventh ode of the Roman poet Horace
Horace
Quintus Horatius Flaccus , known in the English-speaking world as Horace, was the leading Roman lyric poet during the time of Augustus.-Life:...
, in which he exhorts his companions to "nil desperandum", "despair in no way", and announces "cras ingens iterabimus aequor", "tomorrow we shall set out upon the vast ocean". This speech has been linked to a wider applicability relating to the theme of the voyage of discovery, also found in the Ulysses
Ulysses (poem)
"Ulysses" is a poem in blank verse by the Victorian poet Alfred, Lord Tennyson , written in 1833 and published in 1842 in Tennyson's well-received second volume of poetry. An oft-quoted poem, it is popularly used to illustrate the dramatic monologue form...
of Dante
DANTE
Delivery of Advanced Network Technology to Europe is a not-for-profit organisation that plans, builds and operates the international networks that interconnect the various national research and education networks in Europe and surrounding regions...
and Tennyson
Alfred Tennyson, 1st Baron Tennyson
Alfred Tennyson, 1st Baron Tennyson, FRS was Poet Laureate of the United Kingdom during much of Queen Victoria's reign and remains one of the most popular poets in the English language....
.

Teucer eventually joined King Belus II
Belus II
For other individuals with this name, see Belus.Belus II is in Virgil's Aeneid the king of Tyre and father of Dido, Pygmalion of Tyre, and Anna. As such this Belus is to be equated with the historical King Matan I of Tyre....
in his campaign against Cyprus, and when the island was seized, Belus handed it over to Teucer in reward for his assistance. Teucer founded the city of Salamis
Salamis, Cyprus
Salamis was an ancient Greek city-state on the east coast of Cyprus, at the mouth of the river Pedieos, 6 km north of modern Famagusta. According to tradition the founder of Salamis was Teucer, son of Telamon, who could not return home after the Trojan war because he had failed to avenge his...
on Cyprus which he named after his home state. He further married Eune, daughter of Cyprus or Cinyras
Cinyras
In Greek mythology, Cinyras was a king of Cyprus. Accounts vary significantly as to his genealogy and provide a variety of stories concerning him; in many sources, however, he is associated with the cult of Aphrodite on Cyprus, and Adonis, a consort of Aphrodite, is mentioned as his son.In the...
, and had by her a daughter Asteria.

Local legends of the city of Pontevedra
Pontevedra
Pontevedra is a city in the north-west of the Iberian Peninsula. It is the capital of both the comarca and province of Pontevedra, in Galicia . It is also the capital of its own municipality which is, in fact, often considered as an extension of the actual city...
(Galicia) relate the foundation of this city to Teucer (Teucro), although this seems to be based more on the suspicions that Greek traders might have arrived to that area in ancient times - hence introducing a number of Greek stories - and not historical facts. The city is sometimes poetically called "The City of Teucer" and its inhabitants teucrinos. A number of sporting clubs in the municipality use names related to Teucer.
The source of this article is wikipedia, the free encyclopedia.  The text of this article is licensed under the GFDL.