Encyclopedia
A semi-dome, also called a "half-dome", is the term in architecture
Architecture
Architecture is both the process and product of planning, designing and construction. Architectural works, in the material form of buildings, are often perceived as cultural and political symbols and as works of art...
for half a dome
Dome
A dome is a structural element of architecture that resembles the hollow upper half of a sphere. Dome structures made of various materials have a long architectural lineage extending into prehistory....
("cut" vertically), used to cover a semi-circular area. Similar structures occur in nature.

Semi-domes are a common feature of apse
Apse
In architecture, the apse is a semicircular recess covered with a hemispherical vault or semi-dome...
s in Ancient Roman and traditional church architecture, and mosques and iwan
Iwan
An iwan is a rectangular hall or space, usually vaulted, walled on three sides, with one end entirely open. The formal gateway to the iwan is called pishtaq, a Persian term for a portal projecting from the facade of a building, usually decorated with calligraphy bands, glazed tilework, and...
s in Islamic architecture
Islamic architecture
Islamic architecture encompasses a wide range of both secular and religious styles from the foundation of Islam to the present day, influencing the design and construction of buildings and structures in Islamic culture....
.

A semi-dome, or the whole apse, may also be called a conch after the scallop
Scallop
A scallop is a marine bivalve mollusk of the family Pectinidae. Scallops are a cosmopolitan family, found in all of the world's oceans. Many scallops are highly prized as a food source...
shell often carved as decoration of the semi-dome (all shells were conch
Conch
A conch is a common name which is applied to a number of different species of medium-sized to large sea snails or their shells, generally those which are large and have a high spire and a siphonal canal....
es in Ancient Greek
Ancient Greek
Ancient Greek is the stage of the Greek language in the periods spanning the times c. 9th–6th centuries BC, , c. 5th–4th centuries BC , and the c. 3rd century BC – 6th century AD of ancient Greece and the ancient world; being predated in the 2nd millennium BC by Mycenaean Greek...
), though this is usually used for subsidiary semi-domes, rather than the one over the main apse. Small semi-domes have been often decorated in a shell shape from ancient times, as in Piero della Francesca
Piero della Francesca
Piero della Francesca was a painter of the Early Renaissance. As testified by Giorgio Vasari in his Lives of the Artists, to contemporaries he was also known as a mathematician and geometer. Nowadays Piero della Francesca is chiefly appreciated for his art. His painting was characterized by its...
's Throned Madonna with saints and Federigo da Montefeltro, and the example in the gallery below. Islamic examples may use muqarnas
Muqarnas
Muqarnas is a type of corbel used as a decorative device in traditional Islamic architecture. The term is similar to mocárabe, but mocárabe only refers to designs with formations resembling stalactites, by the use of elements known as alveole.Muqarnas takes the form of small pointed niches,...
decorative corbelling, while in Late Antique, Byzantine
Byzantine architecture
Byzantine architecture is the architecture of the Byzantine Empire. The empire gradually emerged as a distinct artistic and cultural entity from what is today referred to as the Roman Empire after AD 330, when the Roman Emperor Constantine moved the capital of the Roman Empire east from Rome to...
and medieval church architecture
Church architecture
Church architecture refers to the architecture of buildings of Christian churches. It has evolved over the two thousand years of the Christian religion, partly by innovation and partly by imitating other architectural styles as well as responding to changing beliefs, practices and local traditions...
the semi-dome is the classic location for a focal mosaic
Mosaic
Mosaic is the art of creating images with an assemblage of small pieces of colored glass, stone, or other materials. It may be a technique of decorative art, an aspect of interior decoration, or of cultural and spiritual significance as in a cathedral...
, or later fresco
Fresco
Fresco is any of several related mural painting types, executed on plaster on walls or ceilings. The word fresco comes from the Greek word affresca which derives from the Latin word for "fresh". Frescoes first developed in the ancient world and continued to be popular through the Renaissance...
. 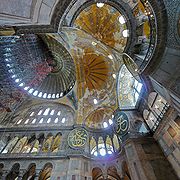 Found in many Ancient Greek exedra
Exedra
In architecture, an exedra is a semicircular recess or plinth, often crowned by a semi-dome, which is sometimes set into a building's facade. The original Greek sense was applied to a room that opened onto a stoa, ringed with curved high-backed stone benches, a suitable place for a philosophical...
s, the semi-dome became a common feature of the apse at the end of Ancient Roman secular basilica
Basilica
The Latin word basilica , was originally used to describe a Roman public building, usually located in the forum of a Roman town. Public basilicas began to appear in Hellenistic cities in the 2nd century BC.The term was also applied to buildings used for religious purposes...
s, which was adopted in Early Christian architecture as the commonest shape for churches, becoming the focal point for decoration. In buildings like Hagia Sophia
Hagia Sophia
Hagia Sophia is a former Orthodox patriarchal basilica, later a mosque, and now a museum in Istanbul, Turkey...
in Byzantine architecture
Byzantine architecture
Byzantine architecture is the architecture of the Byzantine Empire. The empire gradually emerged as a distinct artistic and cultural entity from what is today referred to as the Roman Empire after AD 330, when the Roman Emperor Constantine moved the capital of the Roman Empire east from Rome to...
, apsidal openings or exhedras from the central nave appear in several directions, not just to the litugical east. The tetraconch
Tetraconch
A tetraconch, from the Greek for "four shells", is a building, usually a church or other religious building, with four apses, one in each direction, usually of equal size. The basic ground plan of the building is therefore a Greek cross...
, triconch and cross-in-square
Cross-in-square
The term cross-in-square or crossed-dome denotes the dominant architectural form of middle- and late-period Byzantine churches. The first cross-in-square churches were probably built in the late 8th century, and the form has remained in use throughout the Orthodox world until the present day...
are other typically Eastern Christian church plans that produce several semi-domes.

When the Byzantine styles were adapted in Ottoman architecture, which was even less concerned with maintaining a central axis, a multiplicity of domes and semi-domes becomes the dominating feature of both the internal space and the external appearance of the building. The buildings of Mimar Sinan and his pupil Sedefkar Mehmed Agha are the masterpieces of this style. Mihrab
Mihrab
A mihrab is semicircular niche in the wall of a mosque that indicates the qibla; that is, the direction of the Kaaba in Mecca and hence the direction that Muslims should face when praying...
s are another common location for semi-domes.

In Western Europe the external appearance of a semi-dome is less often exploited than in Byzantine and Ottoman architecture, and is often disguised as a sloping rather than curved semi-circular roof.

Males of the Uca lactea species of fiddler crab
Fiddler crab
A fiddler crab, sometimes known as a calling crab, may be any of approximately 100 species of semi-terrestrial marine crabs which make up the genus Uca. As members of the family Ocypodidae, fiddler crabs are most closely related to the ghost crabs of the genus Ocypode. This entire group is composed...
build mud semidomes to attract females in the mating season.
The source of this article is wikipedia, the free encyclopedia.  The text of this article is licensed under the GFDL.