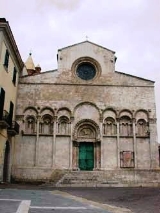 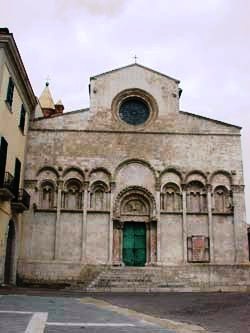 Termoli is a town and comune
Comune
In Italy, the comune is the basic administrative division, and may be properly approximated in casual speech by the English word township or municipality.-Importance and function:...
(municipality) on the Adriatic coast of Italy
Italy
Italy , officially the Italian Republic languages]] under the European Charter for Regional or Minority Languages. In each of these, Italy's official name is as follows:;;;;;;;;), is a unitary parliamentary republic in South-Central Europe. To the north it borders France, Switzerland, Austria and...
, in the province of Campobasso
Province of Campobasso
The Province of Campobasso is a province in the Molise region of Italy. Its capital is the city of Campobasso.It has an area of 2,909 km², and a total population of 230,692...
, region of Molise
Molise
Molise is a region of Southern Italy, the second smallest of the regions. It was formerly part of the region of Abruzzi e Molise and now a separate entity...
. It has a population of around 32,000, having expanded quickly after World War II
World War II
World War II, or the Second World War , was a global conflict lasting from 1939 to 1945, involving most of the world's nations—including all of the great powers—eventually forming two opposing military alliances: the Allies and the Axis...
, and it is a local resort town known for its beaches and old fortifications. Once it was known only as a fishing port, but in the new millennium it is a favourite resort for Italian families.

Human settlements existed in Termoli since pre-historical times, as showed by the presence of ancient necropolis
Necropolis
A necropolis is a large cemetery or burial ground, usually including structural tombs. The word comes from the Greek νεκρόπολις - nekropolis, literally meaning "city of the dead"...
es. The Roman
Ancient Rome
Ancient Rome was a thriving civilization that grew on the Italian Peninsula as early as the 8th century BC. Located along the Mediterranean Sea and centered on the city of Rome, it expanded to one of the largest empires in the ancient world....
s patricians had villa
Villa
A villa was originally an ancient Roman upper-class country house. Since its origins in the Roman villa, the idea and function of a villa have evolved considerably. After the fall of the Roman Republic, villas became small farming compounds, which were increasingly fortified in Late Antiquity,...
e in the nearby coast.

The first documentation of today's city dates to the presence of the ancestor of the current cathedral, documented in the 10th century. Termoli was a Lombard
Lombards
The Lombards , also referred to as Longobards, were a Germanic tribe of Scandinavian origin, who from 568 to 774 ruled a Kingdom in Italy...
county until the arrival of the Normans, under which flourished and expanded. Later devastations meant a period of decay which lasted until around 1770, when the local nobles were permitted by the Kings of Naples to build new edifices along the coast and in direction of the countryside.

Termoli became the centre of one of the larger tank battles of the Italian campaign over the period October 2 to October 6, 1943. On the night of October 2/3 during Operation Devon
Operation Devon
Operation Devon was the codeword given to a British Commando raid during the Second World War.The operation an amphibious landing at Termoli on the Adriatic coast of Italy was carried out on 3 October 1943 by elements of the 2nd Special Service Brigade, No. 2 Commando and No...
the 2nd Special Service Brigade
2nd Special Service Brigade
The 2nd Special Service Brigade was formed in late 1943 in the Middle East and saw service in Italy, the Adriatic, the landings at Anzio and took part in operations in Yugoslavia....
, which comprised No. 3 Commando
No. 3 Commando
No. 3 Commando was a battalion-sized commando unit raised by the British Army for service during the Second World War. Formed in July 1940 from volunteers for special service, it was the first such unit to carry the title of "Commando"...
, 40 (Royal Marine) Commando
40 Commando
40 Commando RM is a battalion sized formation of the British Royal Marines and subordinate unit within 3 Commando Brigade, the principal Commando formation, under the Operational Command of Commander in Chief Fleet....
and the Special Raiding Squadron landed by sea then cleared the town of most of its German defenders. During the first day these forces set up road blocks around the town and were joined by British infantry advancing across the Biferno river to the south-east. They did not know that the 16th Panzer Division was on its way to create a new defensive line. On October 4 British reinforcements arrived by sea and land, but tanks were unable to cross the river until engineers completed a bridge for heavy traffic. On October 5 the Panzers attacked, pushing much of the British line back in disarray. At the end of the day they were only a short distance from the town. However, further reinforcements arrived at the port, and the engineers completed their bridge allowing tanks to cross. On October 6 the Germans renewed their attack, but it soon stalled and the British, with Canadian tanks from the Three Rivers Regiment (12e Régiment blindé du Canada) in support, counter-attacked. They were successful and by October 7 the Germans were pulling back to their next line of defence.

Termoli is rapidly becoming one of the most important centres in the Molise. The latter region suffered from depopulation in the years after World War II
World War II
World War II, or the Second World War , was a global conflict lasting from 1939 to 1945, involving most of the world's nations—including all of the great powers—eventually forming two opposing military alliances: the Allies and the Axis...
and there has been a migration from the internal hill towns to the coastal resort. Its status as the pre-eminent resort site is now being challenged by Campomarino
Campomarino
Campomarino is a comune in the Province of Campobasso in the Italian region Molise, located about 50 km northeast of Campobasso, and about 5 km southeast of Termoli. As of 31 December 2004, it had a population of 6,658....
, about five kilometeres southward.

The old town has been well restored. It is a genuine walled community jutting out into the sea. Many of the houses have been re-built and painted in a range of pastel colours. In a central square there is the cathedral
Termoli Cathedral
Termoli Cathedral is the cathedral of Termoli, in the province of Campobasso, central Italy. The dedication is to the Purification of the Virgin Mary, but is commonly ascribed to Saints Bassus and Timothy, patrons of the city...
(12th-13th century), dedicated to St. Mary of the Purification: it is a noteworthy example of Apulian Romanesque architecture
Romanesque architecture
Romanesque architecture is an architectural style of Medieval Europe characterised by semi-circular arches. There is no consensus for the beginning date of the Romanesque architecture, with proposals ranging from the 6th to the 10th century. It developed in the 12th century into the Gothic style,...
which houses the relics of the two city's patron saints, Bassus of Lucera (San Basso) and Timothy. The upper part of the façade was destroyed by an earthquake in 1456, and also suffered from the Turkish sack of the city in 1566. The Baroque additions were eliminated in the restoration of 1930-1969, returning the edifice to its original appearance. Part of a pre-existing basilica, built in the 11th century (over the original, smaller cathedral called Ecclesia Sanctae Mater) but soon destroyed, has been found under the edifice.

The Castle is the most pre-eminent structure in Termoli: erected by count Robert I of Loritello
Robert I of Loritello
Robert I was an Italo-Norman nobleman, the eldest son of Geoffrey of Hauteville, one of the elder sons of Tancred of Hauteville. He was the first count of Loritello in 1061....
during the Norman domination (11th century), it was largely renovated during the rule of Frederick II
Frederick II, Holy Roman Emperor
Frederick II , was one of the most powerful Holy Roman Emperors of the Middle Ages and head of the House of Hohenstaufen. His political and cultural ambitions, based in Sicily and stretching through Italy to Germany, and even to Jerusalem, were enormous...
(1240), after the damage created by an attack of the Venetian fleet
History of Venice
Venice is a city in Italy. It was also an independent republic from the late 8th century to 1792.*For the history of the city, see History of the city of Venice.*For the Republic, see History of the Republic of Venice....
. The Castle was part of a wider fortification system, including a wall surrounding the entire city, of which only a tower can still be seen.

Termoli's resorts are renowned for the quality of its beaches and the relative purity of its waters.

Very few non-Italians stay in the community. Increasingly tourists to Molise are from the Naples
Naples
Naples is a city in Southern Italy, situated on the country's west coast by the Gulf of Naples. Lying between two notable volcanic regions, Mount Vesuvius and the Phlegraean Fields, it is the capital of the region of Campania and of the province of Naples...
region and Puglia (just to the south of Molise). Recently palm trees have been planted along the seaside walkway and, in the summer, the many restaurants are crowded with visitors from surrounding communities. 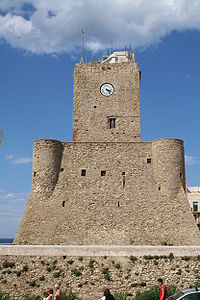 The Kimera Film Festival was established in 2003. Starting from 2008, the public selection of the short movies is held in Termoli, from February to April of every year.