Larino is a town and comune
Comune
In Italy, the comune is the basic administrative division, and may be properly approximated in casual speech by the English word township or municipality.-Importance and function:...
of approximately 8,200 inhabitants in Molise
Molise
Molise is a region of Southern Italy, the second smallest of the regions. It was formerly part of the region of Abruzzi e Molise and now a separate entity...
, province of Campobasso
Province of Campobasso
The Province of Campobasso is a province in the Molise region of Italy. Its capital is the city of Campobasso.It has an area of 2,909 km², and a total population of 230,692...
, southern Italy
Italy
Italy , officially the Italian Republic languages]] under the European Charter for Regional or Minority Languages. In each of these, Italy's official name is as follows:;;;;;;;;), is a unitary parliamentary republic in South-Central Europe. To the north it borders France, Switzerland, Austria and...
. It is located in the fertile valley of the Biferno
Biferno
The Biferno is a river of Molise, in southern Italy. Its source is in the comune of Bojano and during the first few kilometres of its course it receives the waters of numerous streams which flow from the Matese mountains...
River.

The old town, seen from the mountains, is shaped like a bird's wing. The new town, called Piano San Leonardo, is built on a mountainside.

The city of Larino has been continuously inhabited for millennia. Originally settled by the Samnite
Samnium
Samnium is a Latin exonym for a region of south or south and central Italy in Roman times. The name survives in Italian today, but today's territory comprising it is only a small portion of what it once was. The populations of Samnium were called Samnites by the Romans...
and Frentani
Frentani
The Frentani were an ancient people of central Italy, occupying the tract on the east coast of the peninsula from the Apennines to the Adriatic, and from the frontiers of Apulia to those of the Marrucini. They were bounded on the west by the Samnites, with whom they were closely connected, and from...
tribes of Southern Italy, the city came under the control of the Oscan civilization. In 217 BC, the Romans defeated Hannibal here, and it was later incorporated into the Roman Empire
Roman Empire
The Roman Empire was the post-Republican period of the ancient Roman civilization, characterised by an autocratic form of government and large territorial holdings in Europe and around the Mediterranean....
, where it was classified as a municipium, and added to the Secunda Regio (Apulia). 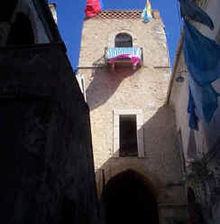 When Julius Caesar
Julius Caesar
Gaius Julius Caesar was a Roman general and statesman and a distinguished writer of Latin prose. He played a critical role in the gradual transformation of the Roman Republic into the Roman Empire....
and Pompey the Great fought for the power in Rome, the latter is said to have joined two of his legions who were encamped in Larino. Earlier the consul Claudius marched through Larinum on his way to attack the Carthaginian Hasdrubal. The city's name appears in the works of the ancient historians Livy and Pliny.

The modern city was built in the 14th century, after the old one, c. 1.5 km away, was destroyed in an earthquake after having repeatedly been sacked by the Saracen
Saracen
Saracen was a term used by the ancient Romans to refer to a people who lived in desert areas in and around the Roman province of Arabia, and who were distinguished from Arabs. In Europe during the Middle Ages the term was expanded to include Arabs, and then all who professed the religion of Islam...
s. The old Roman city of Larinum was situated along the main road to the South-East, which started on the coast in Histonium (Vasto
Vasto
Vasto is a town and comune on the Adriatic coast of the Province of Chieti in southern Abruzzo, Italy. The population is now just over 40,000.-History:According to tradition, the town was founded by Diomedes, the Greek hero...
), and ran from Larinum eastward to Sipontum. The main road also branched off at Larinum into a secondary road to Bovianum Vetus.

In 1656, a plague nearly wiped out the city. The 373 survivors were prepared to abandon the settlement, but through the vigorous efforts of then Bishop Giuseppe Catalano, they were convinced to stay, and the city grew and thrived once again.

During World War II
World War II
World War II, or the Second World War , was a global conflict lasting from 1939 to 1945, involving most of the world's nations—including all of the great powers—eventually forming two opposing military alliances: the Allies and the Axis...
the radio reported that Larino had been totally destroyed in a bombardment. While it was true that the Allies and the Germans were in the vicinity of the town, hostility was avoided and the town was preserved. The city faced a large exodus during the 1950-60s, due to the extreme poverty of the Molise region, and there is a large community of Larinesi living abroad, as well as their first- and second-generation descendants.

The amphitheatre, in the upper town, was constructed in the 1st century AD by a prominent citizen of Larino who had made his fortune in far away Rome. The arena could comfortably seat 12,000 spectators. The structure is elliptical in form and it was built into a natural declivity in the terrain.

Other sights include the Fontana Nuova ("New Fountain" or A fônde 'e San Parde, Saint Pardo's fountain), now in disrepair, and the Duomo (Cathedral), made a minor basilica
Minor basilica
Minor basilica is a title given to some Roman Catholic churches. By canon law no Catholic church can be honoured with the title of basilica unless by apostolic grant or from immemorial custom....
in 1928 by Pius XI, which is considered by some to be one of the finest examples of Gothic architecture in Italy. It was built in the 10th and 11th centuries and inaugurated in 1319. It was restored and renovated many times, with the addition of a Gothic arch in 1451, a belltower in 1523 and interior renovations in the 18th century. It was likely built, in part, by architects and engineers brought in from the Angevine
House of Valois-Anjou
The Valois House of Anjou, or the Younger House of Anjou, was a noble French family, deriving from the royal family, the House of Valois. They were monarchs of Naples, as well as various other territories....
rulers of Naples
Kingdom of Naples
The Kingdom of Naples, comprising the southern part of the Italian peninsula, was the remainder of the old Kingdom of Sicily after secession of the island of Sicily as a result of the Sicilian Vespers rebellion of 1282. Known to contemporaries as the Kingdom of Sicily, it is dubbed Kingdom of...
. At that time there was a tradition of using "spoila", remnants of classical buildings, and it is likely that the structure used cut stone from the classical city which existed in the area of what is now called Piano San Leonardo. One of the church's main elements is the portal, with columns included in a blind protyrus, and examples of medieval decoration including lions, gryphons and a lunette with the Crucifixion; the portal is surmounted by a rose window in Gothic style sided by depictions of the Four Evangelists and the Agnus Dei. The Galuppi Tower (1312), across from the Cathedral, has been strengthened by large square metallic plates. The tower, which was part of the old town's defenses, was the bell tower of a now abandoned convent. The entire structure was built on the command of Pope Clement V at the very beginning of the 14th century.

Other churches in the city include San Francesco, Santo Stefano and Santa Maria della Pietà.

The Palazzo Ducale (Ducal Palace), probably originally built as a Norman castle, is the seat of municipal government. The palace is now repainted as it was decades ago. The exterior walls are alternating panels of whitish grey and charcoal black. The upper levels, surrounding the stone windows are a combination of pink and cream. The top level, overlooking a large terrace, is faced in sunflower yellow. Later a part of the building became Albergo Moderno (the Modern Hotel), now also abandoned. The structure has three distinct facades. One distinctly shows the physical structure of the original castle. The second has a renaissance feel and housed the rulers of the town. The third is a large brick neoclassical structure which was adjoined to the castle in the nineteenth century.

The city has many fairs and festivals, notably those of San Primiano and of San Pardo. These include parties and religious processions. Traditional recipes of the town include Pigna Larinese (A pigne a Larnese, a type of cake) and taralli
Taralli
Taralli are an Italian snack food, common all over the southern half of the Italian Peninsula. A cracker similar in texture to a breadstick or a pretzel, taralli can be sweet or savory. Sweet taralli are sometimes glazed with sugar. Savory taralli may be flavored with onion, garlic, sesame seeds,...
con l'uovo (i taralle che l'ôve, egg taralli). It also has its own cultivar of olive, known as the Gentile di Larino, which is highly prized for its oil.

In the summer a series of festivals is held. May 25-27 of each year is dedicated to the Festival of San Pardo (A Fešte 'e San Pàrd). In 2005, there were over 110 carts festooned with hand-made flowers. Each wagon is pulled by two white oxen. A procession moves from the historic centre and the cathedral to the cemetery and the old church which dates from the earliest days of the Christian era. It is at once a religious event, a historic event, and a family celebration. Each cart belongs to a particular family, and the cart's position in the procession is a sign of social standing.