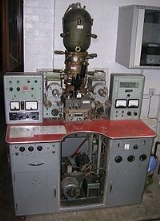 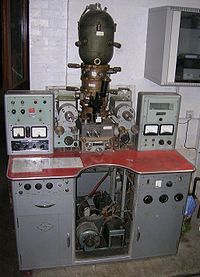 An electron microprobe (EMP), also known as an electron probe microanalyzer (EPMA) or electron micro probe analyzer (EMPA), is an analytical tool used to non-destructively determine the chemical composition of small volumes of solid materials. It works similarly to a scanning electron microscope
Scanning electron microscope
A scanning electron microscope is a type of electron microscope that images a sample by scanning it with a high-energy beam of electrons in a raster scan pattern...
: the sample is bombarded with an electron beam, emitting x-rays at wavelengths characteristic to the elements being analyzed. This enables the abundances of elements present within small sample volumes (typically 10-30 cubic micrometers or less) to be determined. The concentrations of elements from boron
Boron
Boron is the chemical element with atomic number 5 and the chemical symbol B. Boron is a metalloid. Because boron is not produced by stellar nucleosynthesis, it is a low-abundance element in both the solar system and the Earth's crust. However, boron is concentrated on Earth by the...
to plutonium
Plutonium
Plutonium is a transuranic radioactive chemical element with the chemical symbol Pu and atomic number 94. It is an actinide metal of silvery-gray appearance that tarnishes when exposed to air, forming a dull coating when oxidized. The element normally exhibits six allotropes and four oxidation...
can be measured at levels as low as 100 parts per million (ppm). Recent improvements on EMPAs (e.g. the Cameca SX100 with five over-sized PET crystals for trace element analysis) can accurately measure elemental concentrations of approximately 10 ppm.

In 1944, MIT built an electron microprobe, combining an electron microscope and an energy-loss spectrometer. Electron energy-loss spectrometry is very good for light element analysis and they obtained spectra of C-Kα, N-Kα and O-Kα radiation. In 1947, Hiller patented the idea of using an electron beam to produce analytical X-rays, but never constructed a working model. His design proposed using Bragg diffraction from a flat crystal to select specific X-ray wavelengths and a photographic plate as a detector.

In 1948-1950, Raymond Castaing, supervised by André Guinier
André Guinier
André Guinier was a French physicist who did important work in the field of X-ray diffraction and solid-state physics. He worked at the Conservatoire National des Arts et Métiers, then taught at the University of Paris and later at the University of Paris-Sud in Orsay...
, built the first electron “microsonde électronique” (electron microprobe) at the University of Paris. This microprobe produced an electron beam diameter of 1-3 μm with a beam current of ~10 nanoamperes (nA) and used a Geiger counter to detect the X-rays produced from the sample. However, the Geiger counter could not distinguish X-rays produced from specific elements and in 1950, Castaing added a quartz
Quartz
Quartz is the second-most-abundant mineral in the Earth's continental crust, after feldspar. It is made up of a continuous framework of SiO4 silicon–oxygen tetrahedra, with each oxygen being shared between two tetrahedra, giving an overall formula SiO2. There are many different varieties of quartz,...
crystal between the sample and the detector to permit wavelength discrimination. He also added an optical microscope to view the point of beam impact. The resulting microprobe was described in Castaing's 1951 Ph.D. thesis, in which he laid the foundations of the theory and application of quantitative analysis by electron microprobe, establishing the theoretical framework for the matrix corrections of absorption and fluorescence effects. Castaing (1921-1999) is considered the "father" of electron microprobe analysis.

Cameca
Cameca
Cameca is a manufacturer of scientific instruments, namely material analysis instruments based on Charged particle beam , ions or electrons- History :...
(France) produced the first commercial microprobe, the “MS85,” in 1956. It was soon followed by many microprobes from other companies; however, all companies except Cameca and JEOL
JEOL
is a manufacturer of electron microscopes and other scientific instruments. Its headquarters are in Tokyo, Japan, with 25 subsidiaries and two associated companies....
, are now out of business. In addition, many researchers build electron microprobes in their labs. Significant subsequent improvements and modifications to microprobes included scanning the electron beam to make X-ray maps (1960), the addition of solid state EDS detectors (1968) and the development of synthetic multilayer diffracting crystals for analysis of light elements (1984).

A beam of electrons is fired at a sample. The beam causes each element in the sample to emit X-rays at a characteristic frequency; the X-rays can then be detected by the electron microprobe. The size of the electron beam determines the trade-off between resolution and scan time.

Low-energy electrons are produced from a tungsten
Tungsten
Tungsten , also known as wolfram , is a chemical element with the chemical symbol W and atomic number 74.A hard, rare metal under standard conditions when uncombined, tungsten is found naturally on Earth only in chemical compounds. It was identified as a new element in 1781, and first isolated as...
filament or lanthanum hexaboride
Lanthanum hexaboride
]]Lanthanum hexaboride is an inorganic chemical, a boride of lanthanum. It is a refractory ceramic material that has a melting point of 2210 °C, and is insoluble in water and hydrochloric acid. It has a low work function and one of the highest electron emissivities known, and is stable in...
crystal cathode and accelerated by a positively biased anode
Anode
An anode is an electrode through which electric current flows into a polarized electrical device. Mnemonic: ACID ....
plate to 3 to 30 thousand electron volts (keV). The anode plate has central aperture and electrons that pass through it are collimated and focused by a series of magnetic lenses and apertures. The resulting electron beam (approximately from 5 nm to 10 micrometre diameter) may be rastered across the sample or used in spot mode to excite various effects from the sample. Among these effects are: phonon
Phonon
In physics, a phonon is a collective excitation in a periodic, elastic arrangement of atoms or molecules in condensed matter, such as solids and some liquids...
excitation (heat), cathodoluminescence
Cathodoluminescence
Cathodoluminescence is an optical and electrical phenomenon whereby a beam of electrons is generated by an electron gun and then impacts on a luminescent material such as a phosphor, causing the material to emit visible light. The most common example is the screen of a television...
(visible light fluorescence), continuum X-ray radiation (bremsstrahlung
Bremsstrahlung
Bremsstrahlung is electromagnetic radiation produced by the deceleration of a charged particle when deflected by another charged particle, typically an electron by an atomic nucleus. The moving particle loses kinetic energy, which is converted into a photon because energy is conserved. The term is...
), characteristic X-ray radiation, secondary electrons (plasmon
Plasmon
In physics, a plasmon is a quantum of plasma oscillation. The plasmon is a quasiparticle resulting from the quantization of plasma oscillations just as photons and phonons are quantizations of light and mechanical vibrations, respectively...
production), backscattered electron production, and Auger electron
Auger electron
The Auger effect is a physical phenomenon in which the transition of an electron in an atom filling in an inner-shell vacancy causes the emission of another electron. When a core electron is removed, leaving a vacancy, an electron from a higher energy level may fall into the vacancy, resulting in...
production.

Chemical composition is determined by comparing the intensities of characteristic X-rays from the sample material with intensities from known composition (standards). Count from the sample must be corrected for matrix effects (absorption
Absorption (electromagnetic radiation)
In physics, absorption of electromagnetic radiation is the way by which the energy of a photon is taken up by matter, typically the electrons of an atom. Thus, the electromagnetic energy is transformed to other forms of energy for example, to heat. The absorption of light during wave propagation is...
and secondary fluorescence
Fluorescence
Fluorescence is the emission of light by a substance that has absorbed light or other electromagnetic radiation of a different wavelength. It is a form of luminescence. In most cases, emitted light has a longer wavelength, and therefore lower energy, than the absorbed radiation...
) to yield quantitative chemical compositions. The resulting chemical information is gathered in textural context. Variations in chemical composition within a material (zoning), such as a mineral grain or metal, can be readily determined.

Volume from which chemical information is gathered (volume of X-rays generation) is 0.3 – 3 cubic micrometers.

The technique is commonly used for analyzing the chemical composition of metals, alloys, ceramics, and glasses. It is particularly useful for assessing the composition of individual particles or grains and chemical changes on the scale of a few micrometres to millimeters. The electron microprobe is widely used for research, quality control, and failure analysis.

This technique is most commonly used by mineralogists and petrologists. Most rocks are aggregates of small mineral grains. These grains may preserve chemical information adopted during their formation and subsequent alteration. This information may illuminate geologic processes, such as crystallization, lithification, volcanism, metamorphism, orogenic events (mountain building), plate tectonics. This technique is also used for the study of extraterrestrial rocks (i.e. meteorites), and provides chemical data which is vital to understanding the evolution of the planets, asteroids, and comets.

The change in elemental composition from the center (also known as core) to the edge (or rim) of a mineral can yield information about the history of the crystal's formation, including the temperature, pressure, and chemistry of the surrounding medium. Quartz crystals, for example, incorporate a small, but measurable amount of titanium into their structure as a function of temperature, pressure, and the amount of titanium available in their environment. Changes in these parameters are recorded by titanium as the crystal grows.

In exceptionally preserved fossils, such as those of the Burgess shale
Burgess Shale
The Burgess Shale Formation, located in the Canadian Rockies of British Columbia, is one of the world's most celebrated fossil fields, and the best of its kind. It is famous for the exceptional preservation of the soft parts of its fossils...
, soft parts of organisms may be preserved. Since these fossils are often compressed into a 2D film, it can be difficult to deduce what features were what: a famous example is that of triangular extensions in Opabinia
Opabinia
Opabinia is an animal genus found in Cambrian fossil deposits. Its sole species, Opabinia regalis, is known from the Middle Cambrian Burgess Shale of British Columbia, Canada. Fewer than twenty good specimens have been described; 3 specimens of Opabinia are known from the Greater Phyllopod bed,...
, which were interpreted as either legs or extensions of the gut. Elemental mapping showed that they had a similar composition to the gut, favouring the second interpretation. Because of the thin nature of the carbon films, only low voltages (5-15V) can be used in such specimens.