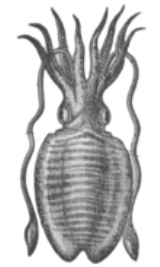 A tentacle or bothrium (plural: bothria) is one of usually two or more elongated flexible organ
Organ (anatomy)
In biology, an organ is a collection of tissues joined in structural unit to serve a common function. Usually there is a main tissue and sporadic tissues . The main tissue is the one that is unique for the specific organ. For example, main tissue in the heart is the myocardium, while sporadic are...
s present in animal
Animal
Animals are a major group of multicellular, eukaryotic organisms of the kingdom Animalia or Metazoa. Their body plan eventually becomes fixed as they develop, although some undergo a process of metamorphosis later on in their life. Most animals are motile, meaning they can move spontaneously and...
s, especially invertebrate
Invertebrate
An invertebrate is an animal without a backbone. The group includes 97% of all animal species – all animals except those in the chordate subphylum Vertebrata .Invertebrates form a paraphyletic group...
s. The term may also refer to the hairs of the leaves of some insectivorous plants
Carnivorous plant
Carnivorous plants are plants that derive some or most of their nutrients from trapping and consuming animals or protozoans, typically insects and other arthropods. Carnivorous plants appear adapted to grow in places where the soil is thin or poor in nutrients, especially nitrogen, such as acidic...
. Usually, tentacles are used for feeding, feeling and grasping. Anatomically, they work like other muscular hydrostat
Muscular hydrostat
A muscular hydrostat is a biological structure found in animals. It is used to manipulate items or to move its host about and consists mainly of muscles with no skeletal support...
s. The word tentillum is a diminutive, but although it literally means "a little tentacle", it usually refers. irrespective of size, to a side branch of a larger tentacle. In some cases such tentilla are specialised for particular functions; for example, in the Cnidaria
Cnidaria
Cnidaria is a phylum containing over 9,000 species of animals found exclusively in aquatic and mostly marine environments. Their distinguishing feature is cnidocytes, specialized cells that they use mainly for capturing prey. Their bodies consist of mesoglea, a non-living jelly-like substance,...
tentilla usually bear cnidocyte
Cnidocyte
A cnidocyte, cnidoblast, or nematocyte is a type of venomous cell unique to the phylum Cnidaria . The cnidocyte cell provides a means for them to catch prey and defend themselves from predators. Despite being morphologically simple, lacking a skeleton and usually being sessile, cnidarians prey on...
s, whereas in the Ctenophora they usually bear collocytes.

The phylum Mollusca
Mollusca
The Mollusca , common name molluscs or mollusksSpelled mollusks in the USA, see reasons given in Rosenberg's ; for the spelling mollusc see the reasons given by , is a large phylum of invertebrate animals. There are around 85,000 recognized extant species of molluscs. Mollusca is the largest...
includes many species with muscular hydrostat
Muscular hydrostat
A muscular hydrostat is a biological structure found in animals. It is used to manipulate items or to move its host about and consists mainly of muscles with no skeletal support...
s in the form of tentacles and arms. Octopus
Octopus
The octopus is a cephalopod mollusc of the order Octopoda. Octopuses have two eyes and four pairs of arms, and like other cephalopods they are bilaterally symmetric. An octopus has a hard beak, with its mouth at the center point of the arms...
es do not have tentacles but rather have eight arms
Cephalopod arm
A cephalopod arm is distinct from a tentacle, though the terms are often used interchangeably.Generally, cephalopod arms have suckers along most of their length, as opposed to tentacles, which have suckers only near their ends. Octopuses have eight arms and no tentacles, while squid and cuttlefish...
. Tentacles are distinguished in this context as being longer than arms, with suckers at their tips only. Squid
Squid
Squid are cephalopods of the order Teuthida, which comprises around 300 species. Like all other cephalopods, squid have a distinct head, bilateral symmetry, a mantle, and arms. Squid, like cuttlefish, have eight arms arranged in pairs and two, usually longer, tentacles...
and cuttlefish
Cuttlefish
Cuttlefish are marine animals of the order Sepiida. They belong to the class Cephalopoda . Despite their name, cuttlefish are not fish but molluscs....
have eight arms like octopuses, and two extra flexible tentacles.

The tentacles of the Giant Squid
Giant squid
The giant squid is a deep-ocean dwelling squid in the family Architeuthidae, represented by as many as eight species...
and Colossal Squid
Colossal Squid
The colossal squid , sometimes called the Antarctic or giant cranch squid, is believed to be the largest squid species in terms of mass. It is the only known member of the genus Mesonychoteuthis...
have powerful suckers and pointed teeth at the ends. The teeth of the Giant Squid resemble bottle caps
Crown Cork
The crown cork , the first form of bottle cap, was invented by William Painter in 1891 in Baltimore. The company making it was originally called the Bottle Seal Company, but it changed its name with the almost immediate success of the crown cork to the Crown Cork and Seal Company...
, and function like small, circular saws; while the tentacles of the Colossal Squid wield two long rows of swiveling, tri-pointed hooks. 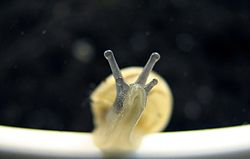 Snail
Snail
Snail is a common name applied to most of the members of the molluscan class Gastropoda that have coiled shells in the adult stage. When the word is used in its most general sense, it includes sea snails, land snails and freshwater snails. The word snail without any qualifier is however more often...
s are another class of Mollusca
Mollusca
The Mollusca , common name molluscs or mollusksSpelled mollusks in the USA, see reasons given in Rosenberg's ; for the spelling mollusc see the reasons given by , is a large phylum of invertebrate animals. There are around 85,000 recognized extant species of molluscs. Mollusca is the largest...
. They have less elaborate tentacles than the Cephalopods. Pulmonate land snails usually have two sets of tentacles on the head: the upper pair have an eye at the end; the lower pair are for olfaction
Olfaction
Olfaction is the sense of smell. This sense is mediated by specialized sensory cells of the nasal cavity of vertebrates, and, by analogy, sensory cells of the antennae of invertebrates...
. Both pairs are fully retractable. Some marine snails such as the abalone
Abalone
Abalone , from aulón, are small to very large-sized edible sea snails, marine gastropod molluscs in the family Haliotidae and the genus Haliotis...
and the top snails, Trochidae
Trochidae
The Trochidae, common name top snails, are a taxonomic family of very small to large sea snails, marine gastropod molluscs in the clade Vetigastropoda ....
have numerous small tentacles around the edge of the mantle
Mantle (mollusc)
The mantle is a significant part of the anatomy of molluscs: it is the dorsal body wall which covers the visceral mass and usually protrudes in the form of flaps well beyond the visceral mass itself.In many, but by no means all, species of molluscs, the epidermis of the mantle secretes...
. These are known as pallial tentacles.

Cnidarians, which include among others the jellyfish
Jellyfish
Jellyfish are free-swimming members of the phylum Cnidaria. Medusa is another word for jellyfish, and refers to any free-swimming jellyfish stages in the phylum Cnidaria...
es, are another phylum with many tentacled specimens. Cnidarians often have huge numbers of cnidocyte
Cnidocyte
A cnidocyte, cnidoblast, or nematocyte is a type of venomous cell unique to the phylum Cnidaria . The cnidocyte cell provides a means for them to catch prey and defend themselves from predators. Despite being morphologically simple, lacking a skeleton and usually being sessile, cnidarians prey on...
s on their tentacles. Cnidocytes are cells containing a coiled thread-like structure called a nematocyst, fired at potential prey.

Many species of the jellyfishlike ctenophore
Ctenophore
The Ctenophora are a phylum of animals that live in marine waters worldwide. Their most distinctive feature is the "combs", groups of cilia that they use for swimming, and they are the largest animals that swim by means of cilia – adults of various species range from a few millimeters to in size...
s have two tentacles, while some have none. Their tentacles have adhesive structures called colloblast
Colloblast
Colloblasts are a cell type found in ctenophores. They are widespread in the tentacles of these animals and are used to capture prey. Colloblasts consist of a coiled spiral filament that is embedded in the epidermis and an axial filament with a granular dome. The apical surface of these cells...
s or lasso cells. These cells burst open when prey comes in contact with the tentacle; sticky threads released from each of the colloblasts then captures food.

Bryozoa
Bryozoa
The Bryozoa, also known as Ectoprocta or commonly as moss animals, are a phylum of aquatic invertebrate animals. Typically about long, they are filter feeders that sieve food particles out of the water using a retractable lophophore, a "crown" of tentacles lined with cilia...
(Moss animals) are tiny creatures with a ring of tentacles surrounding the mouth.

Some wormlike amphibian
Amphibian
Amphibians , are a class of vertebrate animals including animals such as toads, frogs, caecilians, and salamanders. They are characterized as non-amniote ectothermic tetrapods...
s have tentacles. The caecilian
Caecilian
The caecilians are an order of amphibians that superficially resemble earthworms or snakes. They mostly live hidden in the ground, making them the least familiar order of amphibians. All extant caecilians and their closest fossil relatives are grouped as the clade Apoda. They are mostly...
s have two tentacles at their heads, which are probably used for smell.

The star-nosed mole
Star-nosed mole
The star-nosed mole is a small mole found in wet low areas of eastern Canada and the north-eastern United States, with records extending along the Atlantic coast as far as extreme southeastern Georgia...
, Condylura cristata, possesses nasal tentacles which are mobile and extremely sensitive, helping the animal to find its way about the burrow and detect prey. 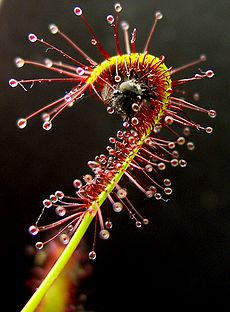 In carnivorous plant
Carnivorous plant
Carnivorous plants are plants that derive some or most of their nutrients from trapping and consuming animals or protozoans, typically insects and other arthropods. Carnivorous plants appear adapted to grow in places where the soil is thin or poor in nutrients, especially nitrogen, such as acidic...
s, tentacles refer to the stalked glands of the upper surface of the leaves
Leaf
A leaf is an organ of a vascular plant, as defined in botanical terms, and in particular in plant morphology. Foliage is a mass noun that refers to leaves as a feature of plants....
.

On a sundew plant, they are hairlike projections with a drop of nectar-like glue which attract insects. When an insect is captured, the tentacles bend inward and the leaf rolls together as shown in the picture. The tentacles then secrete enzyme
Enzyme
Enzymes are proteins that catalyze chemical reactions. In enzymatic reactions, the molecules at the beginning of the process, called substrates, are converted into different molecules, called products. Almost all chemical reactions in a biological cell need enzymes in order to occur at rates...
s to dissolve and digest the insect.