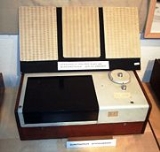 Encyclopedia
The Teldec is a German
Germany
Germany , officially the Federal Republic of Germany , is a federal parliamentary republic in Europe. The country consists of 16 states while the capital and largest city is Berlin. Germany covers an area of 357,021 km2 and has a largely temperate seasonal climate...
record label
Record label
In the music industry, a record label is a brand and a trademark associated with the marketing of music recordings and music videos. Most commonly, a record label is the company that manages such brands and trademarks, coordinates the production, manufacture, distribution, marketing and promotion,...
in Hamburg
Hamburg
-History:The first historic name for the city was, according to Claudius Ptolemy's reports, Treva.But the city takes its modern name, Hamburg, from the first permanent building on the site, a castle whose construction was ordered by the Emperor Charlemagne in AD 808...
, Germany. Today the label is a property of Warner Music Group
Warner Music Group
Warner Music Group is the third largest business group and family of record labels in the recording industry, making it one of the big four record companies...
.

Teldec was a major German producer of (first) shellac and (later) vinyl records. The Teldec manufacturing facility was located in Nortorf
Nortorf
Nortorf is a town in the district of Rendsburg-Eckernförde, in Schleswig-Holstein, Germany. It is situated approx. 13 km northwest of Neumünster, and 25 km southwest of Kiel.-Geography:...
near Kiel
Kiel
Kiel is the capital and most populous city in the northern German state of Schleswig-Holstein, with a population of 238,049 .Kiel is approximately north of Hamburg. Due to its geographic location in the north of Germany, the southeast of the Jutland peninsula, and the southwestern shore of the...
in Germany. The company was founded 1950 as a cooperation between Telefunken
Telefunken
Telefunken is a German radio and television apparatus company, founded in Berlin in 1903, as a joint venture of Siemens & Halske and the Allgemeine Elektricitäts-Gesellschaft...
and Decca Records. The name Teldec is the result of taking the first three letters of both labels: Telefunken and Decca. Records manufactured by Teldec mostly were released under the Telefunken or Decca label, but normally these records contained no hint that they were made by Teldec. In 1983 Telefunken and Decca rectracted from their engagement in vinyl record production and Teldec was sold to Time Warner. In 1997 the remaining compact-disc production facility in Nortorf was to be closed by Time Warner, but a management buyout was done and the new founded company OK-media is continuing the CD production until now. In 2001, after the merger of AOL & Time Warner, Teldec closed down. 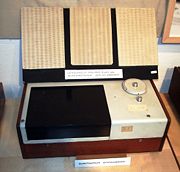 In the early 1970s Teldec was acting for Telefunken in the development of a disc manufacturing technology for Telefunken's "TED" vinyl video disc player TD1005, released in 1975. The TED
Television Electronic Disc
Television Electronic Disc is a discontinued video recording format, released in 1975 by Telefunken and Teldec. The format used flexible foil discs, which spun at 1,500 rpm on a cushion of air...
system was more or less a predecessor of the more successful optical Philips Laserdisc video system, as the TED system employed the idea of using FM instead of AM for storing the video signal on a disc for the first time.

The TED video-disc player used a piezo-electric
Piezoelectricity
Piezoelectricity is the charge which accumulates in certain solid materials in response to applied mechanical stress. The word piezoelectricity means electricity resulting from pressure...
pick-up cartridge with a diamond stylus, mechanically sampling the frequency-modulated
FM broadcasting
FM broadcasting is a broadcasting technology pioneered by Edwin Howard Armstrong which uses frequency modulation to provide high-fidelity sound over broadcast radio. The term "FM band" describes the "frequency band in which FM is used for broadcasting"...
, PAL
PAL
PAL, short for Phase Alternating Line, is an analogue television colour encoding system used in broadcast television systems in many countries. Other common analogue television systems are NTSC and SECAM. This page primarily discusses the PAL colour encoding system...
-encoded A/V-signal from thousands of concentric grooves, vertically recorded into the surface of a very thin, flexible vinyl disc. The disc was freely rotating on a thin cushion of air between the disc and a fixed plate at 1500rpm (25Hz), the disc being stabilized only by centrifugal force. The sampling frequency of the combined audio/video signal was about 2.7MHz. Maximum video playing time was 10 minutes on a 210 mm disc, amounting to about 15,000 concentric grooves on the disc, each storing two half-frame PAL-video-lines.