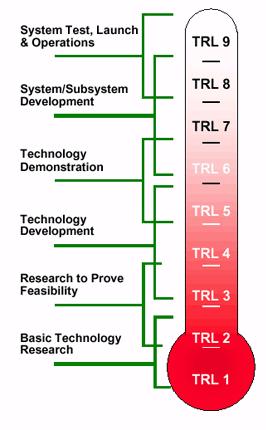 Technology Readiness Level (TRL) is a measure used by some United States government agencies and many of the world's major companies (and agencies) to assess the maturity of evolving technologies
Mature technology
A mature technology is a technology that has been in use for long enough that most of its initial faults and inherent problems have been removed or reduced by further development...
(materials, components, devices, etc.) prior to incorporating that technology into a system or subsystem. Generally speaking, when a new technology is first invented
Invention
An invention is a novel composition, device, or process. An invention may be derived from a pre-existing model or idea, or it could be independently conceived, in which case it may be a radical breakthrough. In addition, there is cultural invention, which is an innovative set of useful social...
or conceptualized, it is not suitable for immediate application. Instead, new technologies are usually subjected to experiment
Experiment
An experiment is a methodical procedure carried out with the goal of verifying, falsifying, or establishing the validity of a hypothesis. Experiments vary greatly in their goal and scale, but always rely on repeatable procedure and logical analysis of the results...
ation, refinement, and increasingly realistic testing. Once the technology is sufficiently proven, it can be incorporated into a system
System
System is a set of interacting or interdependent components forming an integrated whole....
/subsystem.

The DoD uses similar definitions for the following specialized areas:

Instruments and spacecraft sub-systems are classified according to a "Technology Readiness level" (TRL) on a scale of 1 to 9. Levels 1 to 4 relate to creative innovate technologies pre or during mission assessment phase. Levels 5 to 9 relate to existing technologies and to missions in definition phase.


If the TRL is too low, then a mission risks being jeopardized by delays or cost over-runs. It is a responsibility of the Advanced Studies and Technology Preparation Division to promote the technology readiness at a very early stage in order to make new missions feasible.


Other definitions and uses

Technology Readiness Levels were originally developed by NASA in the 1980s. The original definitions only included seven levels, which were later expanded to nine.

In 1995, John C. Mankins, NASA, wrote a paper that discussed NASA’s use of TRLs and proposed expanded descriptions for each TRL. In 1999, the United States General Accounting Office produced an influential report that examined the differences in technology transition
Technology transfer
Technology Transfer, also called Transfer of Technology and Technology Commercialisation, is the process of skill transferring, knowledge, technologies, methods of manufacturing, samples of manufacturing and facilities among governments or universities and other institutions to ensure that...
between the DOD and private industry. It concluded that the DOD takes greater risks and attempts to transition emerging technologies at lesser degrees of maturity than does private industry. The GAO concluded that use of immature technology increased overall program risk. The GAO recommended that the DOD adopt the use of NASA's Technology Readiness Levels as a means of assessing technology maturity prior to transition. In 2001, the Deputy Under Secretary of Defense for Science and Technology issued a memorandum that endorsed use of TRLs in new major programs. Guidance for assessing technology maturity was incorporated into the Defense Acquisition Guidebook. Subsequently, the DOD developed detailed guidance for using TRLs in the 2003 DOD Technology Readiness Assessment Deskbook. 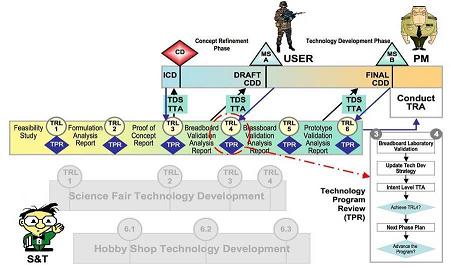 The Technology Program Management Model was developed by the United States Army
United States Army
The United States Army is the main branch of the United States Armed Forces responsible for land-based military operations. It is the largest and oldest established branch of the U.S. military, and is one of seven U.S. uniformed services...
. The TPMM is a TRL-gated high-fidelity activity model that provides a flexible management tool to assist Technology Managers in planning, managing, and assessing their technologies for successful technology transition. The model provides a core set of activities including systems engineering
Systems engineering
Systems engineering is an interdisciplinary field of engineering that focuses on how complex engineering projects should be designed and managed over the life cycle of the project. Issues such as logistics, the coordination of different teams, and automatic control of machinery become more...
and program management
Program management
Program management or programme management is the process of managing several related projects, often with the intention of improving an organization's performance...
tasks that are tailored to the technology development and management goals. This approach is comprehensive, yet it consolidates the complex activities that are relevant to the development and transition of a specific technology program into one integrated model.

The primary purpose of using Technology Readiness Levels is to help management in making decisions concerning the development and transitioning of technology. It should be viewed as one of several tools that are needed to manage the progress of research and development activity within an organization.
Among the advantages of TRLs:


Some of the characteristics of TRLs that limit their utility:


Current TRL models tend to disregard negative and obsolescence factors. There have been suggestions made for incorporating such factors into assessments.