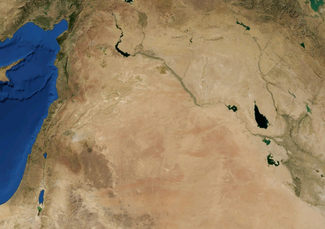 The Syrian Desert also known as the Syro-Arabian desert is a combination of steppe
Steppe
In physical geography, steppe is an ecoregion, in the montane grasslands and shrublands and temperate grasslands, savannas, and shrublands biomes, characterized by grassland plains without trees apart from those near rivers and lakes...
and true desert
Desert
A desert is a landscape or region that receives an extremely low amount of precipitation, less than enough to support growth of most plants. Most deserts have an average annual precipitation of less than...
that is located in the northern Arabian Peninsula covering 200,000 square miles (over 500,000 square kilometers). also the desert is very rocky and flat

The Syrian desert is part of the Al-Hamad, which covers portions of Syria
Syria
Syria , officially the Syrian Arab Republic , is a country in Western Asia, bordering Lebanon and the Mediterranean Sea to the West, Turkey to the north, Iraq to the east, Jordan to the south, and Israel to the southwest....
, Iraq
Iraq
Iraq ; officially the Republic of Iraq is a country in Western Asia spanning most of the northwestern end of the Zagros mountain range, the eastern part of the Syrian Desert and the northern part of the Arabian Desert....
, Jordan
Jordan
Jordan , officially the Hashemite Kingdom of Jordan , Al-Mamlaka al-Urduniyya al-Hashemiyya) is a kingdom on the East Bank of the River Jordan. The country borders Saudi Arabia to the east and south-east, Iraq to the north-east, Syria to the north and the West Bank and Israel to the west, sharing...
and Saudi Arabia
Saudi Arabia
The Kingdom of Saudi Arabia , commonly known in British English as Saudi Arabia and in Arabic as as-Sa‘ūdiyyah , is the largest state in Western Asia by land area, constituting the bulk of the Arabian Peninsula, and the second-largest in the Arab World...
. Its border on the west is the Orontes Valley
Orontes River
The Orontes or ‘Āṣī is a river of Lebanon, Syria and Turkey.It was anciently the chief river of the Levant, also called Draco, Typhon and Axius...
, and its border on the east is the Euphrates
Euphrates
The Euphrates is the longest and one of the most historically important rivers of Western Asia. Together with the Tigris, it is one of the two defining rivers of Mesopotamia...
. In the north, the desert gives way to the more fertile areas of north-central Syria. In the south, it runs into the deserts of the southern Arabian Peninsula
Arabian Peninsula
The Arabian Peninsula is a land mass situated north-east of Africa. Also known as Arabia or the Arabian subcontinent, it is the world's largest peninsula and covers 3,237,500 km2...
. Many oases exist in the Syrian Desert such as Palmyra
Palmyra
Palmyra was an ancient city in Syria. In the age of antiquity, it was an important city of central Syria, located in an oasis 215 km northeast of Damascus and 180 km southwest of the Euphrates at Deir ez-Zor. It had long been a vital caravan city for travellers crossing the Syrian desert...
. Damascus
Damascus
Damascus , commonly known in Syria as Al Sham , and as the City of Jasmine , is the capital and the second largest city of Syria after Aleppo, both are part of the country's 14 governorates. In addition to being one of the oldest continuously inhabited cities in the world, Damascus is a major...
is also located on an oasis
Oasis
In geography, an oasis or cienega is an isolated area of vegetation in a desert, typically surrounding a spring or similar water source...
. The desert's remarkable landscape was formed by lava flows from the volcanic region of the Jebel Druze in southern Syria. The Syrian Desert is the origin of the Syrian hamster
Hamster
Hamsters are rodents belonging to the subfamily Cricetinae. The subfamily contains about 25 species, classified in six or seven genera....
.

The desert was historically inhabited by bedouin
Bedouin
The Bedouin are a part of a predominantly desert-dwelling Arab ethnic group traditionally divided into tribes or clans, known in Arabic as ..-Etymology:...
tribes, and many tribes still remain in the region, their members living mainly in towns and settlements built near oases. Some bedouin still maintain their traditional way of life in the desert. Safaitic
Safaitic
Safaitic is the name given to an Old North Arabian dialect, preserved in the form of inscriptions which are written in a type of South Semitic script. These inscriptions were written by bedouin and semi-nomadic inhabitants of the Syro-Arabian desert...
inscriptions, proto-Arabic texts written by literate bedouin, are found throughout the Syrian Desert. These date approximately from the 1st century B.C. to the 4th century A.D.

During the 2003 Iraq War, the desert served as a major supply line for the Iraqi insurgents, with the Iraq portion of the desert becoming a primary stronghold of the Sunni insurgents operating in the Al Anbar Governorate, particularly after the Coalition capture of Fallujah
Fallujah
Fallujah is a city in the Iraqi province of Al Anbar, located roughly west of Baghdad on the Euphrates. Fallujah dates from Babylonian times and was host to important Jewish academies for many centuries....
during Operation Phantom Fury
Operation Phantom Fury
The Second Battle of Fallujah was a joint U.S., Iraqi, and British offensive in November and December 2004, considered the highest point of conflict in Fallujah during the Iraq War. It was led by the U.S...
. A series of Coalition military operations were relatively ineffective at removing the insurgent presence in the Desert. However as the insurgents began to gain control of the surrounding areas the importance of the Syrian desert as a center of operations was believed to have lessened. By September 2006 insurgents had gained control of virtually all of the Anbar Governorate and had moved most of their forces, equipment and leaders further east to insurgent-controlled cities near the Euphrates river; nevertheless the Syrian Desert remains one of the primary routes for smuggling equipment due to its location near the Syrian border.
The source of this article is wikipedia, the free encyclopedia.  The text of this article is licensed under the GFDL.