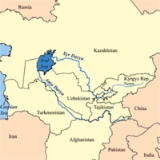 Encyclopedia
The Syr Darya also transliterated Syrdarya or Sirdaryo, is a river
River
A river is a natural watercourse, usually freshwater, flowing towards an ocean, a lake, a sea, or another river. In a few cases, a river simply flows into the ground or dries up completely before reaching another body of water. Small rivers may also be called by several other names, including...
in Central Asia
Central Asia
Central Asia is a core region of the Asian continent from the Caspian Sea in the west, China in the east, Afghanistan in the south, and Russia in the north...
, sometimes known as the Jaxartes or Yaxartes from its Ancient Greek
Ancient Greek
Ancient Greek is the stage of the Greek language in the periods spanning the times c. 9th–6th centuries BC, , c. 5th–4th centuries BC , and the c. 3rd century BC – 6th century AD of ancient Greece and the ancient world; being predated in the 2nd millennium BC by Mycenaean Greek...
name . The Greek name is derived from Old Persian, Yakhsha Arta ("Great Pearly"), a reference to the color of the river's water. In medieval Islamic writings, the river is uniformly known as Sayhoun (سيحون) - after one of the four rivers of Paradise. (Amu Darya
Amu Darya
The Amu Darya , also called Oxus and Amu River, is a major river in Central Asia. It is formed by the junction of the Vakhsh and Panj rivers...
was likewise known as Jayhoun, the name of another one of the four).

The name, which comes from Persian
Persian language
Persian is an Iranian language within the Indo-Iranian branch of the Indo-European languages. It is primarily spoken in Iran, Afghanistan, Tajikistan and countries which historically came under Persian influence...
and has long been used in the East, is a relatively recent one in western writings; prior to the early 20th century, the river was known by various versions of its ancient Greek name. Following the Battle of Jaxartes
Battle of Jaxartes
The Battle of Jaxartes was a battle fought in 329 BC by Alexander the Great and his Macedonian army against the Scythians at the Syr Darya River - the modern name for the River Jaxartes...
the river marked the northernmost limit of Alexander the Great's conquests. Greek historians have claimed that here in 329 BC
329 BC
Year 329 BC was a year of the pre-Julian Roman calendar. At the time, it was known as the Year of the Consulship of Privernas and Decianus...
he founded the city Alexandria Eschate
Alexandria Eschate
Alexandria Eschate or Alexandria Eskhata was founded by Alexander the Great in August 329 BCE as his most northerly base in Central Asia...
(literally, "Alexandria the Furthest") as a permanent garrison. The city is now known as Khujand
Khujand
Khujand , also transliterated as Khudzhand, , formerly Khodjend or Khodzhent until 1936 and Leninabad until 1991, is the second-largest city of Tajikistan. It is situated on the Syr Darya River at the mouth of the Fergana Valley...
. In reality, he had just renamed (and possibly, expanded) the city of Cyropolis
Cyropolis
Cyropolis , was an ancient city founded by Cyrus the Great in northern Tajikistan in 544 BCE to mark the northeastern border of his Persian empire.-Location:...
founded by king Cyrus the Great
Cyrus the Great
Cyrus II of Persia , commonly known as Cyrus the Great, also known as Cyrus the Elder, was the founder of the Achaemenid Empire. Under his rule, the empire embraced all the previous civilized states of the ancient Near East, expanded vastly and eventually conquered most of Southwest Asia and much...
of Persia, more than two centuries earlier.

The river rises in two headstreams in the Tian Shan Mountains
Tian Shan
The Tian Shan , also spelled Tien Shan, is a large mountain system located in Central Asia. The highest peak in the Tian Shan is Victory Peak , ....
in Kyrgyzstan
Kyrgyzstan
Kyrgyzstan , officially the Kyrgyz Republic is one of the world's six independent Turkic states . Located in Central Asia, landlocked and mountainous, Kyrgyzstan is bordered by Kazakhstan to the north, Uzbekistan to the west, Tajikistan to the southwest and China to the east...
and eastern Uzbekistan
Uzbekistan
Uzbekistan , officially the Republic of Uzbekistan is a doubly landlocked country in Central Asia and one of the six independent Turkic states. It shares borders with Kazakhstan to the west and to the north, Kyrgyzstan and Tajikistan to the east, and Afghanistan and Turkmenistan to the south....
—the Naryn River
Naryn River
The Naryn River rises in the Tian Shan mountains in Kyrgyzstan, Central Asia, flowing west through the Fergana Valley into Uzbekistan. Here it merges with the Kara Darya River to form the Syr Darya...
and the Kara Darya
Kara Darya
The Kara Darya or Qaradaryo is a tributary of the Syr Darya in Kyrgyzstan and eastern Uzbekistan. The river is formed by the confluence of Kara-Kulja River and Tar River. There are more than 200 known tributaries of Kara Darya; the largest are Jazy River, Kara Unkur River, Kegart River, Kurshab...
—and flows for some 2212 kilometres (1,374.5 mi) west and north-west Uzbekistan and southern Kazakhstan
Kazakhstan
Kazakhstan , officially the Republic of Kazakhstan, is a transcontinental country in Central Asia and Eastern Europe. Ranked as the ninth largest country in the world, it is also the world's largest landlocked country; its territory of is greater than Western Europe...
to the remains of the Aral Sea
Aral Sea
The Aral Sea was a lake that lay between Kazakhstan in the north and Karakalpakstan, an autonomous region of Uzbekistan, in the south...
. The Syr Darya drains an area of over 800000 square kilometres (308,881.7 sq mi), but no more than 200000 square kilometres (77,220.4 sq mi) actually contribute significant flow to the river. Its annual flow is a very modest 37 cubic kilometre per year—half that of its sister river, the Amu Darya
Amu Darya
The Amu Darya , also called Oxus and Amu River, is a major river in Central Asia. It is formed by the junction of the Vakhsh and Panj rivers...
.

Along its course, the Syr Darya irrigates the most fertile cotton-growing region in the whole of Central Asia, together with the towns of Kokand
Kokand
Kokand is a city in Fergana Province in eastern Uzbekistan, at the southwestern edge of the Fergana Valley. It has a population of 192,500 . Kokand is 228 km southeast of Tashkent, 115 km west of Andijan, and 88 km west of Fergana...
, Khujand
Khujand
Khujand , also transliterated as Khudzhand, , formerly Khodjend or Khodzhent until 1936 and Leninabad until 1991, is the second-largest city of Tajikistan. It is situated on the Syr Darya River at the mouth of the Fergana Valley...
, Kyzylorda and Turkestan
Hazrat-e Turkestan
-References:*Hill, John E. Through the Jade Gate to Rome: A Study of the Silk Routes during the Later Han Dynasty, 1st to 2nd Centuries CE. BookSurge, Charleston, South Carolina. ISBN 978-1-4392-2134-1.*Hulsewé, A. F. P. and Loewe, M. A. N. 1979...
.

An extensive system of canals, many built in the 18th century by the Uzbek Khanate of Kokand
Khanate of Kokand
The Khanate of Kokand was a state in Central Asia that existed from 1709–1883 within the territory of modern eastern Uzbekistan, southern Kazakhstan, Tajikistan and Kyrgyzstan...
, spans the regions the river flows through. Massive expansion of irrigation canals during the Soviet
Soviet Union
The Soviet Union , officially the Union of Soviet Socialist Republics , was a constitutionally socialist state that existed in Eurasia between 1922 and 1991....
period, to irrigate cotton
Cotton
Cotton is a soft, fluffy staple fiber that grows in a boll, or protective capsule, around the seeds of cotton plants of the genus Gossypium. The fiber is almost pure cellulose. The botanical purpose of cotton fiber is to aid in seed dispersal....
fields, caused ecological damage to the area, with the river drying up long before reaching the Aral Sea
Aral Sea
The Aral Sea was a lake that lay between Kazakhstan in the north and Karakalpakstan, an autonomous region of Uzbekistan, in the south...
which, as a result, has shrunk to a small remnant of its former size. With millions of people now settled in these cotton areas, it is not clear how the situation can be rectified.

An open oceanic seaway between Sea of Azov and the Caspian Sea Eurasia Canal
Eurasia Canal
The Eurasia Canal is a proposed 700-kilometre long canal connecting the Caspian Sea to the lower Black Sea along the Kuma-Manych Depression, which is often considered the border between Europe and Asia...
would allow for greater evaporation and snowpack.
The increased water would allow the Aral Sea to refill and be connected perhaps all the way up the Syr Darya to Isfara.
Not only would this support farming, but also allow for International Shipping (through the Black Sea), as well as use of Naval vessels if required.