Encyclopedia
Kokand is a city in Fergana Province
Fergana Province
Fergana Province is a viloyat of Uzbekistan, located in the southern part of the Fergana Valley in the far east of the country. It borders the Namangan and Andijan Provinces of Uzbekistan, as well as Kyrgyzstan and Tajikistan. It covers an area of 6,800 km2...
in eastern Uzbekistan
Uzbekistan
Uzbekistan , officially the Republic of Uzbekistan is a doubly landlocked country in Central Asia and one of the six independent Turkic states. It shares borders with Kazakhstan to the west and to the north, Kyrgyzstan and Tajikistan to the east, and Afghanistan and Turkmenistan to the south....
, at the southwestern edge of the Fergana Valley
Fergana Valley
The Fergana Valley or Farghana Valley is a region in Central Asia spreading across eastern Uzbekistan, Kyrgyzstan and Tajikistan. Divided across three subdivisions of the former Soviet Union, the valley is ethnically diverse, and in the early 21st century was the scene of ethnic conflict...
. It has a population of 192,500 (1999 census estimate). Kokand is 228 km southeast of Tashkent
Tashkent
Tashkent is the capital of Uzbekistan and of the Tashkent Province. The officially registered population of the city in 2008 was about 2.2 million. Unofficial sources estimate the actual population may be as much as 4.45 million.-Early Islamic History:...
, 115 km west of Andijan
Andijan
Andijan or Andizhan is the fourth-largest city in Uzbekistan, and the capital of the Andijan Province. It is located in the east of the country, at , in the Fergana Valley, near the border with Kyrgyzstan on the Andijan-Say River...
, and 88 km west of Fergana
Fergana
Fergana is a city , the capital of Fergana Province in eastern Uzbekistan, at the southern edge of the Fergana Valley in southern Central Asia, cutting across the borders of Kyrgyzstan, Tajikistan, and Uzbekistan...
. It is nicknamed “City of Winds”, or sometimes “Town of the Boar".

Kokand is on the crossroads of the ancient trade routes, at the junction of two main routes into the Fergana Valley, one leading northwest over the mountains to Tashkent, and the other west through Khujand
Khujand
Khujand , also transliterated as Khudzhand, , formerly Khodjend or Khodzhent until 1936 and Leninabad until 1991, is the second-largest city of Tajikistan. It is situated on the Syr Darya River at the mouth of the Fergana Valley...
. As a result, Kokand is the main transportation junction in the Fergana Valley. 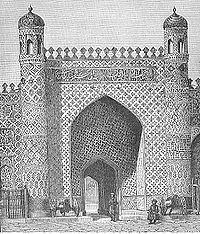 Kokand has existed since at least the 10th century, under the name of Khavakend and was frequently mentioned in traveler’s accounts of the caravan route between India
India
India , officially the Republic of India , is a country in South Asia. It is the seventh-largest country by geographical area, the second-most populous country with over 1.2 billion people, and the most populous democracy in the world...
and China
China
Chinese civilization may refer to:* China for more general discussion of the country.* Chinese culture* Greater China, the transnational community of ethnic Chinese.* History of China* Sinosphere, the area historically affected by Chinese culture...
. The Mongols
Mongol Empire
The Mongol Empire , initially named as Greater Mongol State was a great empire during the 13th and 14th centuries...
destroyed Kokand in the 13th century.

The present city began as a fort in 1732 on the site of another older fortress called Eski-Kurgan. In 1740, it became the capital of an Uzbek kingdom, the Khanate of Kokand
Khanate of Kokand
The Khanate of Kokand was a state in Central Asia that existed from 1709–1883 within the territory of modern eastern Uzbekistan, southern Kazakhstan, Tajikistan and Kyrgyzstan...
, which reached as far as Kyzylorda to the west and Bishkek
Bishkek
Bishkek , formerly Pishpek and Frunze, is the capital and the largest city of Kyrgyzstan.Bishkek is also the administrative centre of Chuy Province which surrounds the city, even though the city itself is not part of the province but rather a province-level unit of Kyrgyzstan.The name is thought to...
to the northeast. Kokand was also the major religious center of the Fergana Valley, boasting more than 300 mosques.

Russia
Russia
Russia or , officially known as both Russia and the Russian Federation , is a country in northern Eurasia. It is a federal semi-presidential republic, comprising 83 federal subjects...
n imperial forces under Mikhail Skobelev
Mikhail Skobelev
Mikhail Dmitrievich Skobelev was a Russian general famous for his conquest of Central Asia and heroism during the Russo-Turkish War of 1877-78. Dressed in white uniform and mounted on a white horse, and always in the thickest of the fray, he was known and adored by his soldiers as the "White...
captured the city in 1883 which then became part of Russian Turkistan. It was the capital of the short-lived (1917–18) anti-Bolshevik
Bolshevik
The Bolsheviks, originally also Bolshevists , derived from bol'shinstvo, "majority") were a faction of the Marxist Russian Social Democratic Labour Party which split apart from the Menshevik faction at the Second Party Congress in 1903....
Provisional Government of Autonomous Turkistan (also known as Kokand Autonomy). They sought co-operation from Ataman Dutov
Alexander Dutov
Alexander Ilyich Dutov , one of the leaders of the Cossack counterrevolution in the Urals, Lieutenant General .Dutov was born in Kazalinsk...
and Alash Orda
Alash Orda
Alash Orda was the name of the provisional Kazakh government between 13 December 1917 and 26 August 1920.The Alash Party proclaimed the autonomy of the Kazakh people in December 1917. Membership consists from 25 members and 15 member candidates...
. However their emissary to the Amir
Mohammed Alim Khan
Emir Said Mir Mohammed Alim Khan was the last emir of the Manghit dynasty, the last ruling dynasty of the Emirate of Bukhara in Central Asia...
of Bukhara
Bukhara
Bukhara , from the Soghdian βuxārak , is the capital of the Bukhara Province of Uzbekistan. The nation's fifth-largest city, it has a population of 263,400 . The region around Bukhara has been inhabited for at least five millennia, and the city has existed for half that time...
achieved little.

Islam plays large role in the cultural life of Kokand. A number of madrasah
Madrasah
Madrasah is the Arabic word for any type of educational institution, whether secular or religious...
can be found with the city. It is also home to a number of notable hanafi
Hanafi
The Hanafi school is one of the four Madhhab in jurisprudence within Sunni Islam. The Hanafi madhhab is named after the Persian scholar Abu Hanifa an-Nu‘man ibn Thābit , a Tabi‘i whose legal views were preserved primarily by his two most important disciples, Abu Yusuf and Muhammad al-Shaybani...
scholars, such as Abdulhafiz Al-Quqoniy and Yorqinjon Qori Al-Quqoniy.

There are 2 institutes, 9 colleges and lyceum
Lyceum
The lyceum is a category of educational institution defined within the education system of many countries, mainly in Europe. The definition varies between countries; usually it is a type of secondary school.-History:...
s, 40 secondary schools, 5 musical schools, a theater, and 20 libraries. There are 7 historical and house museums located in Kokand.

The Black-market provides nearly 75% of the income generated within the borders of the city. This includes: retail, groceries, employment, money exchange, agriculture and manufacturing of many goods. A large part of the population work as small business owners in outdoor markets.

Kokand is also a center for the manufacture of fertilizers, chemicals, machinery, and cotton
Cotton
Cotton is a soft, fluffy staple fiber that grows in a boll, or protective capsule, around the seeds of cotton plants of the genus Gossypium. The fiber is almost pure cellulose. The botanical purpose of cotton fiber is to aid in seed dispersal....
and food products. Over the last two decades, new districts and public buildings have been created in the city as well as many houses, shops, cafes, restaurants and other private sector ventures. Kokand is also an educational center with 1 institute, and 9 colleges and lyceums, and numerous museums.