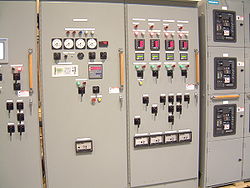 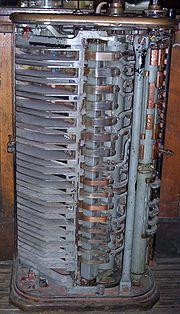 The very earliest central power stations used simple open knife switch
Knife switch
A knife switch is a type of switch used to control the flow of electricity in a circuit. It is composed of a hinge which allows a metal lever, or knife, to be lifted from or inserted into a slot or jaw. The hinge and jaw are both fixed to an insulated base, and the knife has an insulated handle to...
es, mounted on insulating panels of marble or asbestos. Power levels and voltages rapidly escalated, making open manually operated switches too dangerous to use for anything other than isolation of a de-energized circuit. Oil-filled equipment allowed arc energy to be contained and safely controlled. By the early 20th century, a switchgear line-up would be a metal-enclosed structure with electrically operated switching elements, using oil circuit breakers. Today, oil-filled equipment has largely been replaced by air-blast, vacuum, or SF6 equipment, allowing large currents and power levels to be safely controlled by automatic equipment incorporating digital controls, protection, metering and communications.

High voltage switchgear was invented at the end of the 19th century for operating motors
Electric motor
An electric motor converts electrical energy into mechanical energy.Most electric motors operate through the interaction of magnetic fields and current-carrying conductors to generate force...
and other electric machines. The technology has been improved over time and can be used with voltages up to 1,100 kV.

At small substations, switches may be manually operated, but at important switching stations on the transmission network all devices have motor operators to allow for remote control.

A piece of switchgear may be a simple open-air isolator switch or it may be insulated by some other substance. An effective although more costly form of switchgear is gas insulated switchgear (GIS), where the conductors and contacts are insulated by pressurized sulfur hexafluoride
Sulfur hexafluoride
Sulfur hexafluoride is an inorganic, colorless, odorless, and non-flammable greenhouse gas. has an octahedral geometry, consisting of six fluorine atoms attached to a central sulfur atom. It is a hypervalent molecule. Typical for a nonpolar gas, it is poorly soluble in water but soluble in...
gas
Gas
Gas is one of the three classical states of matter . Near absolute zero, a substance exists as a solid. As heat is added to this substance it melts into a liquid at its melting point , boils into a gas at its boiling point, and if heated high enough would enter a plasma state in which the electrons...
(SF6). Other common types are oil or vacuum insulated switchgear.

Oil circuit breakers rely upon vaporization of some of the oil to blast a jet of oil through the arc.

Gas (SF6) circuit breakers sometimes stretch the arc using a magnetic field, and then rely upon the dielectric strength of the SF6 to quench the stretched arc.

Vacuum circuit breakers have minimal arcing (as there is nothing to ionize other than the contact material), so the arc quenches when it is stretched a very small amount (<2–3 mm). At or near current zero the arc is not hot enough to maintain a plasma, and current ceases; the gap can then withstand the rise of voltage. Vacuum circuit breakers are frequently used in modern medium-voltage switchgear to 35,000 volts. Unlike the other types, they are inherently unsuitable for interrupting DC faults.

Air circuit breakers may use compressed air (puff) to blow out the arc, or alternatively, the contacts are rapidly swung into a small sealed chamber, the escaping of the displaced air thus blowing out the arc.

Circuit breakers are usually able to terminate all current flow very quickly: typically between 30 ms and 150 ms depending upon the age and construction of the device.

Several different classifications of switchgear can be made:


A single line-up may incorporate several different types of devices, for example, air-insulated bus, vacuum circuit breakers, and manually operated switches may all exist in the same row of cubicles.

Ratings, design, specifications and details of switchgear are set by a multitude of standards. In North America mostly IEEE and ANSI
Ansi
Ansi is a village in Kaarma Parish, Saare County, on the island of Saaremaa, Estonia....
standards are used, much of the rest of the world uses IEC
International Electrotechnical Commission
The International Electrotechnical Commission is a non-profit, non-governmental international standards organization that prepares and publishes International Standards for all electrical, electronic and related technologies – collectively known as "electrotechnology"...
standards, sometimes with local national derivatives or variations.

One of the basic functions of switchgear is protection, which is interruption of short-circuit and overload fault currents while maintaining service to unaffected circuits. Switchgear also provides isolation of circuits from power supplies. Switchgear is also used to enhance system availability by allowing more than one source to feed a load.

To help ensure safe operation sequences of switchgear, trapped key interlocking
Trapped key interlocking
Trapped key interlocking utilizes locks and keys for sequential control of equipment and machinery to ensure safe operation. A simple system might consist of two locks and a single key. Normally inserting the key into a lock would enable a power supply, thus in this simple system only one power...
provides predefined scenarios of operation. For example, if only one of two sources of supply are permitted to be connected at a given time, the interlock scheme may require that the first switch must be opened to release a key that will allow closing the second switch. Complex schemes are possible.

Indoor switchgear can also be type tested for internal arc containment (e.g. IEC 62271-200). This test is important for user safety as modern switchgear is capable of switching large currents. (https://www.energy.siemens.com/cms/00000013/aune/Documents/Medium%20Voltage%20Arc%20Fault%20Containment.pdf)

Switchgear is often inspected using thermal imaging to assess the state of the system and predict failures before they occur. Other methods include partial discharge (PD) testing, using either fixed or portable testers, and acoustic emission testing using surface-mounted transducers (for oil equipment) or ultrasonic detectors used in outdoor switchyards. SF6 equipment is invariably fitted with alarms and interlocks to warn of loss of pressure, and to prevent operation if the pressure falls too low.

The increasing awareness of dangers associated with high fault levels has resulted in network operators specifying closed door operation for operating earth switches and racking breakers. Many European power companies have banned operators from switch rooms while operating. Remote racking system
Remote racking system
A remote racking system is a system that allows an operator to operate a racking system from a remote location. It offers a safe alternative to manually racking circuit breakers, which reduces the requirement for service personnel to wear a full-body arc flash hazard suit for...
s are available which allow an operator to rack switchgear from a remote location without the need to wear a protective arc flash hazard suit.