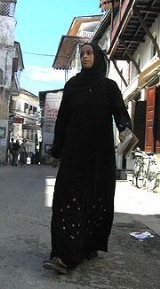 Overview
The term jilbāb or jilbaab (Arabic جلباب) is the plural of the word jilaabah which refers to any long and loose-fit coat or garment worn by some Muslim
Muslim
A Muslim, also spelled Moslem, is an adherent of Islam, a monotheistic, Abrahamic religion based on the Quran, which Muslims consider the verbatim word of God as revealed to prophet Muhammad. "Muslim" is the Arabic term for "submitter" .Muslims believe that God is one and incomparable...
women. They believe that this definition of jilbab fulfills the Quranic demand for a Hijab
Hijab
The word "hijab" or "'" refers to both the head covering traditionally worn by Muslim women and modest Muslim styles of dress in general....
. Jilbab or Jilaabah is also known as Jubbah or Manteau (which is the French word for coat or mantle).

The modern jilbāb covers the entire body, except for hands, face, and head.

Are you supposed to wear Jilbab at your own home, if a man ex. the plumber comes.While there are other female and your mehram in the same house?
More
x