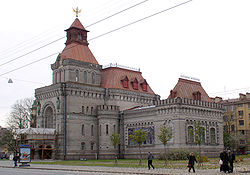 Suvorov Memorial Museum (Russian: Музей Суворова) in Saint Petersburg
Saint Petersburg
Saint Petersburg is a city and a federal subject of Russia located on the Neva River at the head of the Gulf of Finland on the Baltic Sea...
, Russia, is a military museum
Museum
A museum is an institution that cares for a collection of artifacts and other objects of scientific, artistic, cultural, or historical importance and makes them available for public viewing through exhibits that may be permanent or temporary. Most large museums are located in major cities...
dedicated to the memory of Generalissimo Alexander Suvorov
Alexander Suvorov
Alexander Vasilyevich Suvorov , Count Suvorov of Rymnik, Prince in Italy, Count of the Holy Roman Empire , was the fourth and last generalissimo of the Russian Empire.One of the few great generals in history who never lost a battle along with the likes of Alexander...
(1729-1800). It was founded in 1900 to commemorate the centenary of Suvorov's death and was inaugurated four years later, on the 175th anniversary of Suvorov's birth, with much pageantry, in the presence of Emperor Nicholas II.

In 1904, the museum moved into the present building, purpose-built to a flamboyant design by Alexander von Hohen in a dramatic Russian Revival
Russian Revival
The Russian Revival style is the generic term for a number of different movements within Russian architecture that arose in second quarter of the 19th century and was an eclectic melding of pre-Peterine Russian architecture and elements of Byzantine architecture.The Russian Revival style arose...
style. The building's austere outlook derives primarily from medieval Muscovite military architecture. Apart from the Suvorov family coat of arms
Coat of arms
A coat of arms is a unique heraldic design on a shield or escutcheon or on a surcoat or tabard used to cover and protect armour and to identify the wearer. Thus the term is often stated as "coat-armour", because it was anciently displayed on the front of a coat of cloth...
and signs of military glory, the facade displays two mosaics representing "Suvorov Leaving Russia for Italy in 1799" and "Suvorov Crossing the Alps".

The museum's collections, exceeding 100,000 items in 2002, were acquired through purchase and private donations. The Communist authorities had the museum closed down in 1919 and the collections were dispersed to other museums. In the 1930s, the building housed the AeroMuseum. During the Siege of Leningrad
Siege of Leningrad
The Siege of Leningrad, also known as the Leningrad Blockade was a prolonged military operation resulting from the failure of the German Army Group North to capture Leningrad, now known as Saint Petersburg, in the Eastern Front theatre of World War II. It started on 8 September 1941, when the last...
, it was damaged by a bomb.

During the Great Patriotic War the respect of Suvorov was restored in the Soviet military
Order of Suvorov
The Order of Suvorov is a Soviet award, named after Aleksandr Suvorov , that was established on July 29, 1942 by a decision of the Presidium of Supreme Soviet of the USSR. This decoration was created to award senior army personnel for exceptional leadership in combat operations...
. As a consequence, the museum building was renovated in 1950 and resumed its activity the following year. The latest restoration was undertaken in 1995-2000.