In 1974 the Spanish Socialist Workers Party held its 26th Congress in Suresnes (it was illegal in Spain under Franco). Felipe González
Felipe González
Felipe González Márquez is a Spanish socialist politician. He was the General Secretary of the Spanish Socialist Workers' Party from 1974 to 1997. To date, he remains the longest-serving Prime Minister of Spain, after having served four successive mandates from 1982 to 1996.-Early life:Felipe was...
was elected Secretary General, replacing Rodolfo Llopis Ferrándiz. González was from the "reform" wing of the party, and his victory signaled a defeat for the historic and veteran wing of the Party. The direction of the party shifted from the exiles to the young people in Spain who had not fought the Spanish Civil War
Spanish Civil War
The Spanish Civil WarAlso known as The Crusade among Nationalists, the Fourth Carlist War among Carlists, and The Rebellion or Uprising among Republicans. was a major conflict fought in Spain from 17 July 1936 to 1 April 1939...
.

The Pont de Suresnes carries the Allée de Longchamp (one of the main traffic arteries) from the Bois de Boulogne
Bois de Boulogne
The Bois de Boulogne is a park located along the western edge of the 16th arrondissement of Paris, near the suburb of Boulogne-Billancourt and Neuilly-sur-Seine...
over the Seine
Seine
The Seine is a -long river and an important commercial waterway within the Paris Basin in the north of France. It rises at Saint-Seine near Dijon in northeastern France in the Langres plateau, flowing through Paris and into the English Channel at Le Havre . It is navigable by ocean-going vessels...
into the western suburbs of Paris. 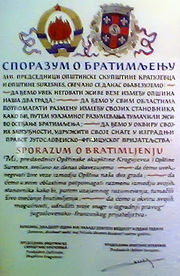 Suresnes is twinned with: Colmenar Viejo
Colmenar Viejo
Colmenar Viejo is a town of about 44,000 inhabitants, located in the Community of Madrid, Spain, 30 kilometers north of Madrid on the M-607 motorway.-Main sights:The most important tourist attractions places in Colmenar Viejo are:...
, Spain District of Göttingen
Göttingen (district)
Göttingen is a district in Lower Saxony, Germany. It is bounded by the districts of Northeim and Osterode, and by the states of Thuringia and Hesse .-History:...
, Germany Hackney
London Borough of Hackney
The London Borough of Hackney is a London borough of North/North East London, and forms part of inner London. The local authority is Hackney London Borough Council....
, United Kingdom Hann. Münden
Hann. Münden
Hann. Münden is the German official name of a town in Lower Saxony, Germany. The city is located in the district of Göttingen at the confluence of the Fulda and Werra rivers, which join to form the river Weser. It has 28,000 inhabitants...
, Germany Holon, Israel Kragujevac
Kragujevac
Kragujevac is the fourth largest city in Serbia, the main city of the Šumadija region and the administrative centre of Šumadija District. It is situated on the banks of the Lepenica River...
, Serbia Villach
Villach
Villach is the second largest city in the Carinthia state in the southern Austria, at the Drava River and represents an important traffic junction for Austria and the whole Alpe-Adria region. , the population is 58,480.-History:...
, Austria