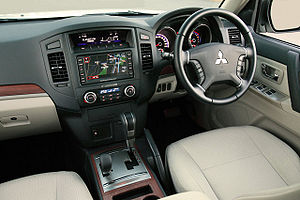 Super Select is the brand name of a four-wheel drive
Four-wheel drive
Four-wheel drive, 4WD, or 4×4 is a four-wheeled vehicle with a drivetrain that allows all four wheels to receive torque from the engine simultaneously...
system produced by Mitsubishi Motors
Mitsubishi Motors
is a multinational automaker headquartered in Minato, Tokyo. In 2009 it was the fifth-largest Japan-based automaker and the 17th-largest in the world measured by production...
, used worldwide except for North America
North America
North America is a continent wholly within the Northern Hemisphere and almost wholly within the Western Hemisphere. It is also considered a northern subcontinent of the Americas...
, where it was initially known as Active-Trac. It was first introduced in 1991 with the then-new second generation of the Mitsubishi Pajero
Mitsubishi Pajero
The Mitsubishi Pajero is a sport utility vehicle manufactured by Mitsubishi Motors. It was named after Leopardus pajeros, the Pampas Cat which is native to the Patagonia plateau region of southern Argentina. However, since pajero is an offensive term for "wanker" in Spanish, alternative names have...
.

The system offers a choice of four rear- or four-wheel driving
Four-wheel drive
Four-wheel drive, 4WD, or 4×4 is a four-wheeled vehicle with a drivetrain that allows all four wheels to receive torque from the engine simultaneously...
modes, selected using a lever mounted alongside the gear shift
Gear shift
The gear shift is the part of the gearbox which has the shift forks and allows the contact from the driver to the synchronization. Most of the time they are so much like the gear counter plus the reverse gear. And they make it possible to choose the gear and to switch this in or out...
, and can be changed while the vehicle is in motion. In 2H mode the front axle
Axle
An axle is a central shaft for a rotating wheel or gear. On wheeled vehicles, the axle may be fixed to the wheels, rotating with them, or fixed to its surroundings, with the wheels rotating around the axle. In the former case, bearings or bushings are provided at the mounting points where the axle...
is disconnected and the vehicle is rear-wheel drive. Reduced frictional losses
Friction
Friction is the force resisting the relative motion of solid surfaces, fluid layers, and/or material elements sliding against each other. There are several types of friction:...
in the powertrain
Powertrain
In a motor vehicle, the term powertrain or powerplant refers to the group of components that generate power and deliver it to the road surface, water, or air. This includes the engine, transmission, drive shafts, differentials, and the final drive...
mean that fuel economy
Fuel economy in automobiles
Fuel usage in automobiles refers to the fuel efficiency relationship between distance traveled by an automobile and the amount of fuel consumed....
improves while noise levels are reduced. 4H is a part-time four-wheel drive mode using a viscous coupling unit
Viscous coupling unit
A viscous coupling is a mechanical device which transfers torque and rotation by the medium of a viscous fluid. It is made of a number of circular plates with tabs or perforations, fitted very close to each other in a sealed drum. Alternate plates are connected to a driving shaft at one end of the...
(VCU) and center differential
Differential (mechanics)
A differential is a device, usually, but not necessarily, employing gears, capable of transmitting torque and rotation through three shafts, almost always used in one of two ways: in one way, it receives one input and provides two outputs—this is found in most automobiles—and in the other way, it...
to direct drive to the front wheels when the rear axle loses traction, and is capable of handling a wide variety of road conditions and speeds. 4HLc locks the center differential to provide extra traction for sandy, snowy or poorly surfaced roads in "high range" mode, while 4LLc, the "low range" mode, also offers a much lower gearing, providing the maximum amount of traction. Changing between 4HLc and 4LLc is only possible with the vehicle stationary.

The system is used on Mitsubishi's Pajero iO
Mitsubishi Pajero iO
The Mitsubishi Pajero iO is a mini SUV produced by Mitsubishi Motors since June 15, 1998 in three-door form, and August 24, 1998 as a five-door...
mini SUV
Mini SUV
Mini SUV is a class of small sport utility vehicles with a length under . This class should not be confused with compact SUV, which refers to slightly larger vehicles, from ....
, while its larger Pajero
Mitsubishi Pajero
The Mitsubishi Pajero is a sport utility vehicle manufactured by Mitsubishi Motors. It was named after Leopardus pajeros, the Pampas Cat which is native to the Patagonia plateau region of southern Argentina. However, since pajero is an offensive term for "wanker" in Spanish, alternative names have...
, Challenger
Mitsubishi Challenger
- First generation :Production began in Japan in 1996, and was available for most export markets by 1997, where it was variously known as the Challenger, Pajero Sport in Europe, Montero Sport in North America and South America, Nativa in parts of Central America and the Middle East, Shogun Sport...
, Triton
Mitsubishi Triton
The Mitsubishi Triton is a compact pickup truck produced by Mitsubishi Motors. It was originally known as the Mitsubishi Forte in Japan from 1978 to 1986, when the name was discontinued in favour of the Strada. In the United States two captive imports of the Forte were sold by the Chrysler...
and Delica
Mitsubishi Delica
The Mitsubishi Delica is a range of trucks and multi-purpose vehicles built by Mitsubishi Motors since 1968. It was originally based on a small pickup truck introduced the previous year, also called the Delica, its name a contraction of the English language phrase Delivery car...
models use a more complex system dubbed Super Select II (SS4-II). In most respects the two are the same, although the torque
Torque
Torque, moment or moment of force , is the tendency of a force to rotate an object about an axis, fulcrum, or pivot. Just as a force is a push or a pull, a torque can be thought of as a twist....
-split in SS4-II is 33/67 front/rear, meaning two thirds of the torque is channelled to the rear axle. In Super Select (SS4i) the torque-split is an equal 50/50. SS4-II also offers an option to lock the rear differential, offering greater traction to the rear axle.
The source of this article is wikipedia, the free encyclopedia.  The text of this article is licensed under the GFDL.