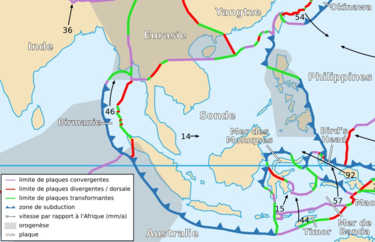 The Sunda Plate is the tectonic plate  on which the majority of Southeast Asia
Southeast Asia
Southeast Asia, South-East Asia, South East Asia or Southeastern Asia is a subregion of Asia, consisting of the countries that are geographically south of China, east of India, west of New Guinea and north of Australia. The region lies on the intersection of geological plates, with heavy seismic...
is located. It was formerly considered a part of the Eurasian Plate
Eurasian Plate
The Eurasian Plate is a tectonic plate which includes most of the continent of Eurasia , with the notable exceptions of the Indian subcontinent, the Arabian subcontinent, and the area east of the Chersky Range in East Siberia...
, but GPS measurements have confirmed its independent movement at 10 mm/yr eastward relative to Eurasia. The Sunda includes the South China Sea
South China Sea
The South China Sea is a marginal sea that is part of the Pacific Ocean, encompassing an area from the Singapore and Malacca Straits to the Strait of Taiwan of around...
, the Andaman Sea
Andaman Sea
The Andaman Sea or Burma Sea is a body of water to the southeast of the Bay of Bengal, south of Burma, west of Thailand and east of the Andaman Islands, India; it is part of the Indian Ocean....
, southern parts of Vietnam
Vietnam
Vietnam – sometimes spelled Viet Nam , officially the Socialist Republic of Vietnam – is the easternmost country on the Indochina Peninsula in Southeast Asia. It is bordered by China to the north, Laos to the northwest, Cambodia to the southwest, and the South China Sea –...
and Thailand
Thailand
Thailand , officially the Kingdom of Thailand , formerly known as Siam , is a country located at the centre of the Indochina peninsula and Southeast Asia. It is bordered to the north by Burma and Laos, to the east by Laos and Cambodia, to the south by the Gulf of Thailand and Malaysia, and to the...
along with Malaysia and the islands of Borneo
Borneo
Borneo is the third largest island in the world and is located north of Java Island, Indonesia, at the geographic centre of Maritime Southeast Asia....
, Sumatra
Sumatra
Sumatra is an island in western Indonesia, westernmost of the Sunda Islands. It is the largest island entirely in Indonesia , and the sixth largest island in the world at 473,481 km2 with a population of 50,365,538...
, Java, and part of Celebes
Sulawesi
Sulawesi is one of the four larger Sunda Islands of Indonesia and is situated between Borneo and the Maluku Islands. In Indonesia, only Sumatra, Borneo, and Papua are larger in territory, and only Java and Sumatra have larger Indonesian populations.- Etymology :The Portuguese were the first to...
in Indonesia
Indonesia
Indonesia , officially the Republic of Indonesia , is a country in Southeast Asia and Oceania. Indonesia is an archipelago comprising approximately 13,000 islands. It has 33 provinces with over 238 million people, and is the world's fourth most populous country. Indonesia is a republic, with an...
, plus the south-western Philippines
Philippines
The Philippines , officially known as the Republic of the Philippines , is a country in Southeast Asia in the western Pacific Ocean. To its north across the Luzon Strait lies Taiwan. West across the South China Sea sits Vietnam...
islands of Palawan
Palawan
Palawan is an island province of the Philippines located in the MIMAROPA region or Region 4. Its capital is Puerto Princesa City, and it is the largest province in the country in terms of total area of jurisdiction. The islands of Palawan stretch from Mindoro in the northeast to Borneo in the...
and the Sulu Archipelago
Sulu Archipelago
The Sulu Archipelago is a chain of islands in the southwestern Philippines. This archipelago is considered to be part of the Moroland by the local rebel independence movement. This island group forms the northern limit of the Celebes Sea....
.

The Sunda is bounded in the east by the Philippine Mobile Belt
Philippine Mobile Belt
The Philippine Mobile Belt is a complex portion of the tectonic boundary between the Eurasian Plate and the Philippine Sea Plate, comprising most of the country of the Philippines. It includes two subduction zones, the Manila Trench to the west and the Philippine Trench to the east, as well as the...
, Molucca Sea Collision Zone
Molucca Sea Collision Zone
The Molucca Sea Collision Zone is postulated by paleogeologists to explain the tectonics of the area based on the Molucca Sea in Indonesia, and adjacent involved areas.-Tectonics:...
, Molucca Sea Plate
Molucca Sea Plate
-Earlier theory:The Molucca Sea Plate was theorised to be a small tectonic plate carrying northern Sulawesi, the Molucca Sea and a portion of the Banda Sea in a region littered with numerous small plates. The theory suggested a subduction zone lies along its northern border with the Sunda Plate...
, Banda Sea Plate
Banda Sea Plate
The Banda Sea Plate is a small tectonic plate underlying the Banda Sea in southeast Asia. This plate also carries a portion of Sulawesi Island, the entire Seram Island, and the Banda Islands. Clockwise from the east it is bounded by the Bird's Head Plate of western New Guinea, Australian Plate,...
and Timor Plate
Timor Plate
The Timor Plate is a microplate in southeast Asia carrying the island of Timor and surrounding islands. The Australian Plate is subducting under the southern edge of the plate, while a small divergent boundary is located on the eastern edge. Another convergent boundary exists with the Banda Sea...
; to the south and west by the Australian Plate; and to the north by the Burma Plate
Burma Plate
The Burma Plate is a small tectonic plate or microplate located in Southeast Asia, often considered a part of the larger Eurasian Plate. The Andaman Islands, Nicobar Islands, and northwestern Sumatra are located on the plate...
, Eurasian Plate
Eurasian Plate
The Eurasian Plate is a tectonic plate which includes most of the continent of Eurasia , with the notable exceptions of the Indian subcontinent, the Arabian subcontinent, and the area east of the Chersky Range in East Siberia...
; and Yangtze Plate
Yangtze Plate
The Yangtze Plate, also called the South China Block or the South China Subplate, comprises the bulk of southern China. It is separated on the east from the Okinawa Plate by a rift that forms the Okinawa Trough which is a Back arc basin, on the south by the Sunda Plate and the Philippine Sea...
. The Indo-Australian Plate
Indo-Australian Plate
The Indo-Australian Plate is a major tectonic plate that includes the continent of Australia and surrounding ocean, and extends northwest to include the Indian subcontinent and adjacent waters...
dips beneath the Sunda Plate along the Java Trench
Java Trench
The Sunda Trench, earlier known as, and sometimes still indicated as the Java Trench, located in the northeastern Indian Ocean, with a length of and a maximum depth of , is the second-deepest point in the Indian Ocean after Diamantina Trench, which is 8,047 metres deep...
, which causes earthquakes.

The eastern, southern, and western boundaries of the Sunda Plate are tectonically complex and seismically active. Only the northern boundary is relatively quiescent.
The source of this article is wikipedia, the free encyclopedia.  The text of this article is licensed under the GFDL.