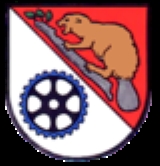 The remains of a prehistoric settlement were uncovered in 1904, when the pastor of Feuerbach, Richard Kallee
Richard Kallee
Richard Kallee was a German Protestant pastor.-Life and work:On 7 October 1877 Richard Kallee was ordained in the church of Böblingen and worked then at the parishes of Willsbach, Michelbach am Wald and of the Collegiate Church of Oehringen...
excavated, archeologically documented and published a total of 102 Alemannic
Alamanni
The Alamanni, Allemanni, or Alemanni were originally an alliance of Germanic tribes located around the upper Rhine river . One of the earliest references to them is the cognomen Alamannicus assumed by Roman Emperor Caracalla, who ruled the Roman Empire from 211 to 217 and claimed thereby to be...
sandstone tomb
Tomb
A tomb is a repository for the remains of the dead. It is generally any structurally enclosed interment space or burial chamber, of varying sizes...
s and cists
Cist
A cist from ) is a small stone-built coffin-like box or ossuary used to hold the bodies of the dead. Examples can be found across Europe and in the Middle East....
.
Together with his helpers he took great care to recover 760 artefacts from these Alemannic graves: skulls and bones, coins, pottery shards, combs, necklaces, belts, locks, swords, spears, arrows and spores, which he researched and published to the end of his life. These are now exhibited in the foyer of the district town hall of Feuerbach.

The first recorded mention of Feuerbach was in the annals of Hirsau Abbey
Hirsau Abbey
Hirsau Abbey, formerly known as Hirschau Abbey, was once one of the most prominent Benedictine abbeys of Germany. It was located in the town of Hirsau, in the Diocese of Speyer, near Calw in the present Baden-Württemberg.-History:...
in 1075 although the name used at the time was Biberbach. This name translates literally as 'beaver-brook', a reference to beavers in Feuerbach valley. The beaver still features on the town's coat of arms today - alongside a cog representing its modern industrial nature and the large number of factories in the area. Later the community was called Fürbach which developed by the end of the 16th century into the name used today.

Until 1860 Feuerbach was mainly a rural community outside the larger city of Stuttgart
Stuttgart
Stuttgart is the capital of the state of Baden-Württemberg in southern Germany. The sixth-largest city in Germany, Stuttgart has a population of 600,038 while the metropolitan area has a population of 5.3 million ....
. As well as traditional farming, the area housed a large number of vineyards. The Killesberg area included a number of stone quarries - with many of the sheer rock faces in this area still visible to this day. In 1848 the first railway tunnel was built between Stuttgart and Feuerbach marking the advent of rapid industrial development in the area. Among others this involved the Robert Bosch
Robert Bosch
Robert Bosch was a German industrialist, engineer and inventor, founder of Robert Bosch GmbH.-Biography:...
company which built a major factory in the town.

On 15 March 1907 Feuerbach was officially raised to the status of a town in its own right. In 1929 Feuerbach merged voluntarily with the neighbouring community of modern-day Stuttgart-Weilimdorf
Stuttgart-Weilimdorf
Weilimdorf is a north-western municipality of the German city of Stuttgart and covers an area of 12,6 km² with a population of around 30,0001 . It first became part of Stuttgart in 1933 and until that time was a separate entity with its own administration which was then subsumed into the city...
.

On 1 May 1933 Feuerbach was engulfed by the expanding city of Stuttgart and given the status of "Feuerbach district".

Feuerbach has played a central role in the development of Stuttgart as a major German centre of industry. As a result it is still home to a large number of companies, including major internationals and small and medium-sized automotive suppliers.

Feuerbach lies directly on the B10 dual carriageway between Karlsruhe
Karlsruhe
The City of Karlsruhe is a city in the southwest of Germany, in the state of Baden-Württemberg, located near the French-German border.Karlsruhe was founded in 1715 as Karlsruhe Palace, when Germany was a series of principalities and city states...
and Ulm
Ulm
Ulm is a city in the federal German state of Baden-Württemberg, situated on the River Danube. The city, whose population is estimated at 120,000 , forms an urban district of its own and is the administrative seat of the Alb-Donau district. Ulm, founded around 850, is rich in history and...
, the B27 between Heilbronn
Heilbronn
Heilbronn is a city in northern Baden-Württemberg, Germany. It is completely surrounded by Heilbronn County and with approximately 123.000 residents, it is the sixth-largest city in the state....
and Tübingen
Tübingen
Tübingen is a traditional university town in central Baden-Württemberg, Germany. It is situated south of the state capital, Stuttgart, on a ridge between the Neckar and Ammer rivers.-Geography:...
) and the B295 between Calw
Calw
Calw is a municipality in the middle of Baden-Württemberg in the south of Germany, capital of the district Calw. It is located in the northern Black Forest.-History:...
and Stuttgart), not far from the A81 Autobahn running north-south to the west of Stuttgart.

Feuerbach is also home to a vocational school for paint and design, another for woodworking technology, the
Leitz
Leitz
The Esselte Leitz GmbH & Co KG, also Leitz, is a German manufacturer of office products. The company, which is headquartered in Stuttgart, is owned by Esselte since 1998. Today the brand Leitz is used by Esselte mainly for filing and workspace products....
business administration school and the Kerschensteinerschule for business technology