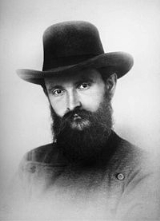 Bosch was born in Albeck, a village to the northeast of Ulm
Ulm
Ulm is a city in the federal German state of Baden-Württemberg, situated on the River Danube. The city, whose population is estimated at 120,000 , forms an urban district of its own and is the administrative seat of the Alb-Donau district. Ulm, founded around 850, is rich in history and...
in southern Germany. He was the eleventh of twelve children. His parents came from a class of well-situated farmers from the region. His father, a freemason, was unusually well-educated for someone of his class, and placed special importance on a good education for his children.

From 1869 to 1876, Robert Bosch attended the Realschule
Realschule
The Realschule is a type of secondary school in Germany, Austria, Switzerland, and Liechtenstein. It has also existed in Croatia , Denmark , Sweden , Hungary and in the Russian Empire .-History:The Realschule was an outgrowth of the rationalism and empiricism of the seventeenth and...
(secondary-technical school) in Ulm, and then took an apprenticeship as a precision mechanic
Precision engineering
Precision engineering is a subdiscipline of electrical engineering, electronics engineering, mechanical engineering, and optical engineering concerned with designing machines, fixtures, and other structures that have exceptionally low tolerances, are repeatable, and are stable over time...
.

After his school and practical education, Bosch spent a further seven years working at diverse companies in Germany
Germany
Germany , officially the Federal Republic of Germany , is a federal parliamentary republic in Europe. The country consists of 16 states while the capital and largest city is Berlin. Germany covers an area of 357,021 km2 and has a largely temperate seasonal climate...
, the United States
United States
The United States of America is a federal constitutional republic comprising fifty states and a federal district...
(for Thomas Edison
Thomas Edison
Thomas Alva Edison was an American inventor and businessman. He developed many devices that greatly influenced life around the world, including the phonograph, the motion picture camera, and a long-lasting, practical electric light bulb. In addition, he created the world’s first industrial...
in New York), and the UK (for the German firm Siemens
Siemens AG
Siemens AG is a German multinational conglomerate company headquartered in Munich, Germany. It is the largest Europe-based electronics and electrical engineering company....
). On November 15, 1886, he opened his own 'Workshop for Precision Mechanics and Electrical Engineering' in Stuttgart
Stuttgart
Stuttgart is the capital of the state of Baden-Württemberg in southern Germany. The sixth-largest city in Germany, Stuttgart has a population of 600,038 while the metropolitan area has a population of 5.3 million ....
. A year later, he made a decisive improvement to an unpatented magneto
Magneto (electrical)
A magneto is an electrical generator that uses permanent magnets to produce alternating current.Magnetos adapted to produce pulses of high voltage are used in the ignition systems of some gasoline-powered internal combustion engines to provide power to the spark plugs...
ignition device made by the engine manufacturer Deutz
Deutz AG
Deutz AG is an engine manufacturer, based in Cologne, Germany.-History:The company was founded by Nikolaus Otto, inventor of the four-stroke internal combustion engine, in 1864 as N. A...
, providing his first business success. The purpose of the device was to generate an electric spark
Electric spark
An electric spark is a type of electrostatic discharge that occurs when an electric field creates an ionized electrically conductive channel in air producing a brief emission of light and sound. A spark is formed when the electric field strength exceeds the dielectric field strength of air...
to ignite the air/fuel mixture in a stationary engine. In 1897, Bosch was the first to adapt a magneto to a vehicle engine. In doing so, he solved one of the greatest technical problems faced by the nascent automotive industry. The invention of the first commercially viable high-voltage spark plug as part of a magneto-based ignition system by Robert Bosch's engineer Gottlob Honold
Gottlob Honold
thumb|220px|Gottlob Honold 1910Gottlob Honold was the leading engineer in the workshop of Robert Bosch and, with Bosch, was the inventor of the spark plug and the modern internal combustion engine, as well as headlights...
in 1902 greatly enhanced the development of the internal combustion engine
Internal combustion engine
The internal combustion engine is an engine in which the combustion of a fuel occurs with an oxidizer in a combustion chamber. In an internal combustion engine, the expansion of the high-temperature and high -pressure gases produced by combustion apply direct force to some component of the engine...
.
Before the 19th century ended, Bosch expanded his operations beyond Germany. The company established a sales office in the UK in 1898, and other European countries soon after. The first sales office and the first factory in the U.S. were opened in 1906 and 1910 respectively. By 1913, the company had branch operations in the Americas, Asia, Africa, and Australia, and was generating 88% of its sales outside Germany. In rapid succession in the years following the First World War, Bosch launched innovations for the motor vehicle, including diesel fuel injection
Fuel injection
Fuel injection is a system for admitting fuel into an internal combustion engine. It has become the primary fuel delivery system used in automotive petrol engines, having almost completely replaced carburetors in the late 1980s....
in 1927. In the 1920s the global economic crisis caused Bosch to begin a rigorous program of modernization and diversification in his company. In only a few years' time, he succeeded in turning his company from a small automotive supplier into a multinational electronics group.

From the beginning, Bosch was greatly concerned about promoting occupational training. Prompted by his awareness of social responsibility, he was one of the first industrialists in Germany to introduce the eight-hour work day, followed by other social benefits for his associates. Robert Bosch did not wish to profit from the armaments contracts awarded to his company during WWI. Instead, he donated several million German marks to charitable causes. A hospital that he gave to the city of Stuttgart opened in 1940.

In the 1920s and 1930s, Robert Bosch was politically active. As a liberal businessman, he sat on a number of economic committees. He devoted a great deal of energy and money to the cause of bringing about reconciliation between Germany and France. He hoped this reconciliation would bring about lasting peace in Europe, and lead to the creation of a European economic area.

The Nazi (National Socialist)
Nazism
Nazism, the common short form name of National Socialism was the ideology and practice of the Nazi Party and of Nazi Germany...
regime in Germany brought Bosch’s peacemaking efforts to an abrupt end. The company accepted armaments contracts, and employed forced laborers during the war. At the same time, Robert Bosch supported the resistance against Adolf Hitler
Adolf Hitler
Adolf Hitler was an Austrian-born German politician and the leader of the National Socialist German Workers Party , commonly referred to as the Nazi Party). He was Chancellor of Germany from 1933 to 1945, and head of state from 1934 to 1945...
: together with his closest associates, he saved victims of Nazi persecution from deportation.

Robert Bosch was keenly interested in agricultural issues, and owned a farm south of Munich
Munich
Munich The city's motto is "" . Before 2006, it was "Weltstadt mit Herz" . Its native name, , is derived from the Old High German Munichen, meaning "by the monks' place". The city's name derives from the monks of the Benedictine order who founded the city; hence the monk depicted on the city's coat...
. He was also a passionate hunter. When he died in 1942, he was survived by four children from two marriages. A son from his first marriage died in 1921 following a protracted illness.

In 1937, Robert Bosch had restructured his company as a private limited company (close corporation). He had established his last will and testament, in which he stipulated that the earnings of the company should be allocated to charitable causes. At the same time, his will sketched the outlines of the corporate constitution which was formulated by his successors in 1964 and is still valid today.