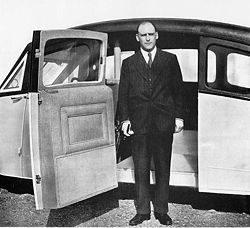 Starting in 1927, thirteen cars were made at Maidenhead
Maidenhead
Maidenhead is a town and unparished area within the Royal Borough of Windsor and Maidenhead, in Berkshire, England. It lies on the River Thames and is situated west of Charing Cross in London.-History:...
. Each was different, as they were intended as showcases for his patent
Patent
A patent is a form of intellectual property. It consists of a set of exclusive rights granted by a sovereign state to an inventor or their assignee for a limited period of time in exchange for the public disclosure of an invention....
s rather than for serious production.

The cars incorporated such features as independent suspension
Independent suspension
Independent suspension is a broad term for any automobile suspension system that allows each wheel on the same axle to move vertically independently of each other. This is contrasted with a beam axle, live axle or deDion axle system in which the wheels are linked – movement on one side affects...
, hydraulic brake
Hydraulic brake
The hydraulic brake is an arrangement of braking mechanism which uses brake fluid, typically containing ethylene glycol, to transfer pressure from the controlling unit, which is usually near the operator of the vehicle, to the actual brake mechanism, which is usually at or near the wheel of the...
s, a heater and all seating within the wheelbase
Wheelbase
In both road and rail vehicles, the wheelbase is the distance between the centers of the front and rear wheels.- Road :In automobiles, the wheelbase is the horizontal distance between the center of the front wheel and the center of the rear wheel...
. Ignition and other controls operated though flexible cables encased in copper tubing, which followed contemporary aircraft industry practice. The cars were rear engined with twin radiators. The first car used an Alvis
Alvis Cars
Alvis Car and Engineering Company Ltd was a British manufacturing company that existed in Coventry, England from 19191967. In addition to automobiles designed for the civilian market, the company also produced racing cars, aircraft engines, armoured cars and other armoured fighting vehicles, the...
front wheel drive chassis effectively turned back to front but adapted so the new front wheels steered. Later cars used Beverley straight 8, Lycoming and Armstrong Siddeley
Armstrong Siddeley
Armstrong Siddeley was a British engineering group that operated during the first half of the 20th century. It was formed in 1919 and is best known for the production of luxury motor cars and aircraft engines.-Siddeley Autocars:...
engines.

The streamlined bodywork is very long at just under 20 feet (6.1 m). The spare wheel was carried inside one of the rear doors which must have put an enormous strain on the hinges and door pillar. The equivalent space in the opposite door was occupied either by a second spare wheel or by a cocktail cabinet. The car's unusual aerodynamic design was eye catching, with very little front overhang, but a long rear overhang (containing the engine). The underside was also covered in sheet metal to enhance aerodynamic efficiency. The Streamline pointed to the future in terms of space efficiency, featuring a seven seat interior and, even by the standards of the time, excellent headroom, which seems to have been a particular concern for the designer
Charles Dennistoun Burney
Sir Charles Dennistoun Burney, 2nd Baronet was an English aeronautical engineer, private inventor and Conservative Party politician....
.

Each car was priced at around £1,500. A blue one was bought by the Prince of Wales
Prince of Wales
Prince of Wales is a title traditionally granted to the heir apparent to the reigning monarch of the United Kingdom of Great Britain and Northern Ireland and the 15 other independent Commonwealth realms...
late in 1930, and another crossed the Atlantic to be exhibited at the Detroit Car Show. In total, 12 Streamlines were built between 1929 and 1931, but none appear to have survived. Crossley Motors
Crossley Motors
Crossley Motors was a British motor vehicle manufacturer based in Manchester, England. They produced approximately 19,000 high quality cars from 1904 until 1938, 5,500 buses from 1926 until 1958 and 21,000 goods and military vehicles from 1914 to 1945.Crossley Brothers, originally...
took out a licence to build the Streamline, and two of these vehicles survive.

The Straight eight Beverley-Barnes engines in the earlier cars proved unreliable, and in the final three cars examples were replaced by US built 6 cylinder Lycoming or UK built Armstrong-Siddeley units.

A contemporary report commended the lack of mechanical noise from the driver's seat and the excellence of the ride. The car's considerable weight - 38 cwt or about 1900 kg on the 1930 model - may have been one cause of the clutch-slip reported at 76 mph (about 122 km/h) which was close to the car's claimed maximum. The engine was mounted wholly behind the rear axle, and the car was therefore alarmingly unstable in wet or windy weather.

A remarkable turning circle of 39 ft (11.9 m) was achieved in spite of the car's length. No two Streamlines were identical and the version tested was "only" 18 ft 7 in (approximately 5.6 meters) long with a 12 ft 5 in (3.8 m) wheelbase which made it unwieldy in restricted spaces. It was longer than the longest available Rolls-Royce
Rolls-Royce Limited
Rolls-Royce Limited was a renowned British car and, from 1914 on, aero-engine manufacturing company founded by Charles Stewart Rolls and Henry Royce on 15 March 1906 as the result of a partnership formed in 1904....
and only about £350 cheaper.

Some of the ideas (including the location of the spare wheel) were used by Crossley Motors
Crossley Motors
Crossley Motors was a British motor vehicle manufacturer based in Manchester, England. They produced approximately 19,000 high quality cars from 1904 until 1938, 5,500 buses from 1926 until 1958 and 21,000 goods and military vehicles from 1914 to 1945.Crossley Brothers, originally...
in their "Streamline" but this also was not a production success. The Maidenhead factory was also used for car production by Marendaz
Marendaz
Marendaz Special cars were made in Brixton Road, London SW9, England from 1926 to 1932 and in Maidenhead, Berkshire, England from 1932 to 1936.DMK Marendaz served as an apprentice at Siddeley-Deasy before the first World War...
and GWK
GWK (car)
The GWK was a British car made in Maidenhead, Berkshire, between 1911 and 1931. It got its name from its founders, Arthur Grice, J Talfourd Wood and C.M. Keiller. The cars were unusual in using a friction drive system....
.