Encyclopedia
The Stone Curlew, Eurasian Thick-knee, or Eurasian Stone-curlew Burhinus oedicnemus is a northern species of the Burhinidae (stone-curlew
Stone-curlew
The Stone-curlews, also known as Dikkops or Thick-knees are a group of largely tropical birds in the family Burhinidae. Despite the group being classified as waders, most species have a preference for arid or semi-arid habitats...
) bird
Bird
Birds are feathered, winged, bipedal, endothermic , egg-laying, vertebrate animals. Around 10,000 living species and 188 families makes them the most speciose class of tetrapod vertebrates. They inhabit ecosystems across the globe, from the Arctic to the Antarctic. Extant birds range in size from...
family.

Despite being classed as a wader, this species prefers dry open habitats with some bare ground. It is largely nocturnal, particularly when singing its loud wailing songs, which are reminiscent of that of curlew
Curlew
The curlews , genus Numenius, are a group of eight species of birds, characterised by long, slender, downcurved bills and mottled brown plumage. They are one of the most ancient lineages of scolopacid waders, together with the godwits which look similar but have straight bills...
s. Food consists of insect
Insect
Insects are a class of living creatures within the arthropods that have a chitinous exoskeleton, a three-part body , three pairs of jointed legs, compound eyes, and two antennae...
s and other small invertebrates. It will also take small reptiles and rodents. It lays 2-3 eggs in a narrow scrape in the ground.

The genus
Genus
In biology, a genus is a low-level taxonomic rank used in the biological classification of living and fossil organisms, which is an example of definition by genus and differentia...
name Burhinus comes from the Greek
Greek language
Greek is an independent branch of the Indo-European family of languages. Native to the southern Balkans, it has the longest documented history of any Indo-European language, spanning 34 centuries of written records. Its writing system has been the Greek alphabet for the majority of its history;...
bous, ox, and rhis, nose. The species
Species
In biology, a species is one of the basic units of biological classification and a taxonomic rank. A species is often defined as a group of organisms capable of interbreeding and producing fertile offspring. While in many cases this definition is adequate, more precise or differing measures are...
name oedicnemus comes from the Greek oidio, to swell, and kneme, the shin or leg, referring to the bird's prominent tibiotarsal joint
Tibiotarsal joint
The Tibiotarsal joint is the joint between the tibia and the tarsus.Synovial distension of the tibiotarsal joint in the horse is known as Bog spavin....
s which also give it the common name of "thick-knee". This is an abbreviated form of Pennant's
Thomas Pennant
Thomas Pennant was a Welsh naturalist and antiquary.The Pennants were a Welsh gentry family from the parish of Whitford, Flintshire, who had built up a modest estate at Bychton by the seventeenth century...
1776 coinage "thick kneed bustard
Bustard
Bustards, including floricans and korhaans, are large terrestrial birds mainly associated with dry open country and steppes in the Old World...
".

The name "Stone Curlew" was first recorded in 1667. It derives from the bird's nocturnal calls sounding like the unrelated Eurasian Curlew
Eurasian Curlew
The Eurasian Curlew, Numenius arquata, is a wader in the large family Scolopacidae. It is one of the most widespread of the curlews, breeding across temperate Europe and Asia...
Numenius arquata and its preference for barren stoney heath
Heath (habitat)
A heath or heathland is a dwarf-shrub habitat found on mainly low quality acidic soils, characterised by open, low growing woody vegetation, often dominated by plants of the Ericaceae. There are some clear differences between heath and moorland...
s. 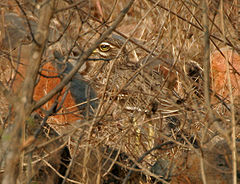