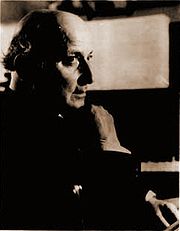 Stevan Hristić (June 19, 1885 – August 21, 1958), was the most popular Serbian
Serbs
The Serbs are a South Slavic ethnic group of the Balkans and southern Central Europe. Serbs are located mainly in Serbia, Montenegro and Bosnia and Herzegovina, and form a sizable minority in Croatia, the Republic of Macedonia and Slovenia. Likewise, Serbs are an officially recognized minority in...
composer
Composer
A composer is a person who creates music, either by musical notation or oral tradition, for interpretation and performance, or through direct manipulation of sonic material through electronic media...
of the first half of the 20th century, remembered best for his technically cultivated compositions in the Neoromanticist
Neoromanticism (music)
Neoromanticism in music is a return to the emotional expression associated with nineteenth-century Romanticism. Since the mid-1970s the term has come to be identified with neoconservative postmodernism, especially in Germany, Austria, and the United States, with composers such as Wolfgang Rihm and...
, veristic, and Romanticist-Impressionist
Impressionist music
Impressionism in music was a tendency in European classical music, mainly in France, which appeared in the late nineteenth century and continued into the middle of the twentieth century. Similarly to its precursor in the visual arts, musical impressionism focuses on a suggestion and an atmosphere...
styles.

He conducted his primary studies in Leipzig
Leipzig
Leipzig Leipzig has always been a trade city, situated during the time of the Holy Roman Empire at the intersection of the Via Regia and Via Imperii, two important trade routes. At one time, Leipzig was one of the major European centres of learning and culture in fields such as music and publishing...
, but also in Moscow
Moscow
Moscow is the capital, the most populous city, and the most populous federal subject of Russia. The city is a major political, economic, cultural, scientific, religious, financial, educational, and transportation centre of Russia and the continent...
, Paris
Paris
Paris is the capital and largest city in France, situated on the river Seine, in northern France, at the heart of the Île-de-France region...
and Rome
Rome
Rome is the capital of Italy and the country's largest and most populated city and comune, with over 2.7 million residents in . The city is located in the central-western portion of the Italian Peninsula, on the Tiber River within the Lazio region of Italy.Rome's history spans two and a half...
before the First World War. He had an expert knowledge of both the European musical style and of Serbian national music (especially the works of Mokranjac). Because of this, he created a distinct style that was a mix of folkloric
Folklore
Folklore consists of legends, music, oral history, proverbs, jokes, popular beliefs, fairy tales and customs that are the traditions of a culture, subculture, or group. It is also the set of practices through which those expressive genres are shared. The study of folklore is sometimes called...
, Late Romantic
Romanticism
Romanticism was an artistic, literary and intellectual movement that originated in the second half of the 18th century in Europe, and gained strength in reaction to the Industrial Revolution...
and Impressionist
Impressionist music
Impressionism in music was a tendency in European classical music, mainly in France, which appeared in the late nineteenth century and continued into the middle of the twentieth century. Similarly to its precursor in the visual arts, musical impressionism focuses on a suggestion and an atmosphere...
elements in both melody
Melody
A melody , also tune, voice, or line, is a linear succession of musical tones which is perceived as a single entity...
and harmony
Harmony
In music, harmony is the use of simultaneous pitches , or chords. The study of harmony involves chords and their construction and chord progressions and the principles of connection that govern them. Harmony is often said to refer to the "vertical" aspect of music, as distinguished from melodic...
.

His greatest contribution to the cultural life in Serbia is the founding of the Belgrade Philharmonic. He was also the director of the Belgrade Opera from 1924 to 1935, and in 1937. He is also one of the founding professors of the Musical Academy. After the Second World War, in 1945, he was a co-founder of the League of Composers of Serbia, also serving as one of its first presidents. He was also the first president of the Alliance of Composers of Yugoslavia, founded in 1950. Since then he was a casual member of the Serbian Academy of Sciences and Arts.

In 1907, he created the stage music for "Čučuk Stana". He continued writing solo poems, a few choir
Choir
A choir, chorale or chorus is a musical ensemble of singers. Choral music, in turn, is the music written specifically for such an ensemble to perform.A body of singers who perform together as a group is called a choir or chorus...
works and two major works - the "Symphonic fantasy for violin and orchestra" and "Rapsody for violin and piano". His most important creations are "Resurrection", the first Serbian Oratorio
Oratorio
An oratorio is a large musical composition including an orchestra, a choir, and soloists. Like an opera, an oratorio includes the use of a choir, soloists, an ensemble, various distinguishable characters, and arias...
; "Opelo in b minor" (a Serbian Orthodox Requiem); and the Ballet
Ballet
Ballet is a type of performance dance, that originated in the Italian Renaissance courts of the 15th century, and which was further developed in France and Russia as a concert dance form. The early portions preceded the invention of the proscenium stage and were presented in large chambers with...
"Ohridska legenda" (The Legend of Ohrid)", his most famous work.

One of his greater contributions is a Ballet scene of Opera
Opera
Opera is an art form in which singers and musicians perform a dramatic work combining text and musical score, usually in a theatrical setting. Opera incorporates many of the elements of spoken theatre, such as acting, scenery, and costumes and sometimes includes dance...
"Suton" from 1958 which he wrote while he was a guest in Moscow
Moscow
Moscow is the capital, the most populous city, and the most populous federal subject of Russia. The city is a major political, economic, cultural, scientific, religious, financial, educational, and transportation centre of Russia and the continent...
.