Stepa Stepanović was born in the village of Kumodraž
Kumodraž
Kumodraž is an urban neighborhood of Belgrade, the capital of Serbia. It is located in Belgrade's municipality of Voždovac.- Location :...
outside of Belgrade
Belgrade
Belgrade is the capital and largest city of Serbia. It is located at the confluence of the Sava and Danube rivers, where the Pannonian Plain meets the Balkans. According to official results of Census 2011, the city has a population of 1,639,121. It is one of the 15 largest cities in Europe...
on . He joined the Serbian army in 1874, as a cadet in the artillery
Artillery
Originally applied to any group of infantry primarily armed with projectile weapons, artillery has over time become limited in meaning to refer only to those engines of war that operate by projection of munitions far beyond the range of effect of personal weapons...
school.

Stepanović obtained significant achievements in the war against the Turks
Ottoman Empire
The Ottoman EmpireIt was usually referred to as the "Ottoman Empire", the "Turkish Empire", the "Ottoman Caliphate" or more commonly "Turkey" by its contemporaries...
, especially in the Battle of Adrianople
Battle of Adrianople (1913)
The Battle or Siege of Adrianople or Siege of Edirne was fought during the First Balkan War, beginning in mid-November 1912 and ending on 26 March 1913 with the capture of Edirne by the Bulgarian 2nd Army....
in March 1913 during the First Balkan War
First Balkan War
The First Balkan War, which lasted from October 1912 to May 1913, pitted the Balkan League against the Ottoman Empire. The combined armies of the Balkan states overcame the numerically inferior and strategically disadvantaged Ottoman armies and achieved rapid success...
.In the Second Balkan War
Second Balkan War
The Second Balkan War was a conflict which broke out when Bulgaria, dissatisfied with its share of the spoils of the First Balkan War, attacked its former allies, Serbia and Greece, on 29 June 1913. Bulgaria had a prewar agreement about the division of region of Macedonia...
his forces were deployed in the Niš
Niš
Niš is the largest city of southern Serbia and third-largest city in Serbia . According to the data from 2011, the city of Niš has a population of 177,972 inhabitants, while the city municipality has a population of 257,867. The city covers an area of about 597 km2, including the urban area,...
region with an encampment in Pirot 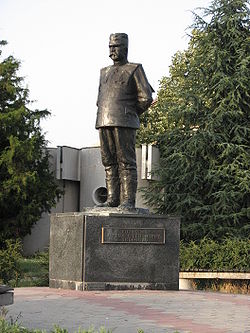 At the beginning of World War I
World War I
World War I , which was predominantly called the World War or the Great War from its occurrence until 1939, and the First World War or World War I thereafter, was a major war centred in Europe that began on 28 July 1914 and lasted until 11 November 1918...
he acted as the representative of then absent chief of staff Radomir Putnik. He was responsible for mobilization and some war preparations. After Putnik's return he took command of the Second Army.
In World War I, he led the Serbian army in a great victory in the Battle of Cer
Battle of Cer
The Battle of Cer also known as Battle of Jadar was one of the first battles of World War I, it also marked the first Allied victory in the war. The battle was fought between the Austro-Hungarian Army and Serbian forces. The results improved Serbian standing in the Alliance...
, where his Second Army completely defeated the Austrian Fifth Army, arriving to the scene after a forced march. This was the first allied victory of the war, and he was promoted to Vojvoda (Field-Marshal). His army achieved successes in the Battle of the Drina and Battle of Kolubara
Battle of Kolubara
The Battle of Kolubara was a major victory of Serbia over the invading Austro-Hungarian armies during World War I. The invaders were routed, and driven back across the Serbian border....
, in addition to the defence of Serbia in 1915.

In 1918 he was again in command of the Second Army which was a part of the large Allied offensive in Macedonia
Macedonia (region)
Macedonia is a geographical and historical region of the Balkan peninsula in southeastern Europe. Its boundaries have changed considerably over time, but nowadays the region is considered to include parts of five Balkan countries: Greece, the Republic of Macedonia, Bulgaria, Albania, Serbia, as...
, they achieved a breakthrough on September 15. The Second Army advanced to the Bulgarian border and from there, after Bulgarian capitulation on September 29, 1918 turned West towards Bosnia and Adriatic sea.

He was an active officer until the end of 1919, when he retired from service as the commander in chief of the Serbian army. During his career he was also serving as the minister of the army on two occasions.

He was decorated with the "Takovski krst sa ukrštenim mačevima" medal for bravery during the 1876-1878 wars against the Turks. He was also awarded the Knight Grand Cross (GCMG) of The Most Distinguished Order of Saint Michael and Saint George. He died in the town of Čačak
Cacak
Čačak is a city in central Serbia. It is the administrative center of the Moravica District of Serbia. Čačak is also the main industrial, cultural and sport center of the district...
on April 29, 1929.