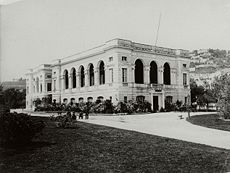 The Stazione Zoologica Anton Dohrn is a research institute
Research institute
A research institute is an establishment endowed for doing research. Research institutes may specialize in basic research or may be oriented to applied research...
in Naples
Naples
Naples is a city in Southern Italy, situated on the country's west coast by the Gulf of Naples. Lying between two notable volcanic regions, Mount Vesuvius and the Phlegraean Fields, it is the capital of the region of Campania and of the province of Naples...
, Italy
Italy
Italy , officially the Italian Republic languages]] under the European Charter for Regional or Minority Languages. In each of these, Italy's official name is as follows:;;;;;;;;), is a unitary parliamentary republic in South-Central Europe. To the north it borders France, Switzerland, Austria and...
, devoted to basic research in biology. Research is largely interdisciplinary involving the fields of evolution
Evolution
Evolution is any change across successive generations in the heritable characteristics of biological populations. Evolutionary processes give rise to diversity at every level of biological organisation, including species, individual organisms and molecules such as DNA and proteins.Life on Earth...
, biochemistry
Biochemistry
Biochemistry, sometimes called biological chemistry, is the study of chemical processes in living organisms, including, but not limited to, living matter. Biochemistry governs all living organisms and living processes...
, molecular biology
Molecular biology
Molecular biology is the branch of biology that deals with the molecular basis of biological activity. This field overlaps with other areas of biology and chemistry, particularly genetics and biochemistry...
, neurobiology, cell biology
Cell biology
Cell biology is a scientific discipline that studies cells – their physiological properties, their structure, the organelles they contain, interactions with their environment, their life cycle, division and death. This is done both on a microscopic and molecular level...
, biological oceanography, marine botany
Marine botany
Marine botany is the study of plants that live in the sea and brackish water. It is a branch of marine biology....
, molecular plant biology, benthic ecology, and ecophysiology
Ecophysiology
Ecophysiology or environmental physiology is a biological discipline which studies the adaptation of organism's physiology to environmental conditions...
.

Founded in 1872 as a private concern by Anton Dohrn
Anton Dohrn
Felix Anton Dohrn was a prominent German Darwinist and the founder and first director of the Stazione Zoologica, Naples, Italy.-Family history:...
, in 1982 the Stazione Zoologica came under the supervision and control of the Ministero dell'Università e della Ricerca Scientifica e Tecnologica (Ministry of Universities and Scientific and Technological Research) as a National Institute.