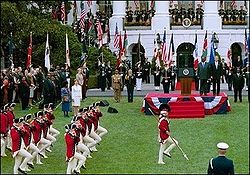 A state visit is a formal visit by a foreign head of state
Head of State
A head of state is the individual that serves as the chief public representative of a monarchy, republic, federation, commonwealth or other kind of state. His or her role generally includes legitimizing the state and exercising the political powers, functions, and duties granted to the head of...
to another nation, at the invitation of that nation's head of state. State visits are the highest form of diplomatic contact between two nations, and are marked by ceremonial pomp and diplomatic protocol. In parliamentary democracies
Parliamentary system
A parliamentary system is a system of government in which the ministers of the executive branch get their democratic legitimacy from the legislature and are accountable to that body, such that the executive and legislative branches are intertwined....
, heads of state may formally issue and accept invitations. However, they do so on the consent of their governments, who usually agree together on when the invitation is to be issued or accepted in advance.

State visits involve some or all the following components:


The foreign head of state is usually accompanied by a senior government minister, usually by a foreign minister
Foreign minister
A Minister of Foreign Affairs, or foreign minister, is a cabinet minister who helps form the foreign policy of a sovereign state. The foreign minister is often regarded as the most senior ministerial position below that of the head of government . It is often granted to the deputy prime minister in...
. Behind the diplomatic protocol, delegations made up from trade
Trade
Trade is the transfer of ownership of goods and services from one person or entity to another. Trade is sometimes loosely called commerce or financial transaction or barter. A network that allows trade is called a market. The original form of trade was barter, the direct exchange of goods and...
organizations also travel with the foreign head of state, offering an opportunity to network and develop economic, cultural, and social links with industry leaders in the nation being visited. At the end of a state visit, the foreign head of state traditionally issues a formal invitation to the head of state of the nation being visited who at another time in the future, would pay a reciprocal state visit.