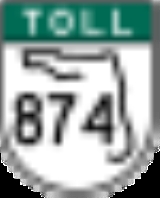 Encyclopedia
State Road 874, also known as the Don Shula Expressway, is an electronic toll road
Open road tolling
Open road tolling or free-flow tolling is the collection of tolls on toll roads without the use of toll booths. An electronic toll collection system is usually used instead. The major advantage to ORT is that users are able to drive through the toll plaza at highway speeds without having to slow...
extending 7 miles (11.3 km), connecting the Homestead Extension of Florida's Turnpike
Florida's Turnpike
Florida's Turnpike , designated as the Ronald Reagan Turnpike, and originally known as the Sunshine State Parkway is a north–south toll road that runs through 11 counties in the Florida peninsula, from U.S...
(SR 821) and SR 826
State Road 826 (Florida)
State Road 826, also known as the Palmetto Expressway, is a bypass route around the greater Miami area, extending from U.S. Route 1 in Pinecrest, going through the inner Miami suburbs in a north-east semicircle to the Golden Glades Interchange, reverting to a surface street to its terminus at...
(Palmetto Expressway) in central Miami-Dade County, Florida
Miami-Dade County, Florida
Miami-Dade County is a county located in the southeastern part of the state of Florida. As of 2010 U.S. Census, the county had a population of 2,496,435, making it the most populous county in Florida and the eighth-most populous county in the United States...
. Despite its even number designation, the divided limited access toll road
Toll road
A toll road is a privately or publicly built road for which a driver pays a toll for use. Structures for which tolls are charged include toll bridges and toll tunnels. Non-toll roads are financed using other sources of revenue, most typically fuel tax or general tax funds...
runs southwest-northeast and is signed south–north. State Road 874 is maintained by MDX
MDX
MDX may refer to:In computing:*Media Data Extended, a file type developed and utilized by Daemon tools for making disc image files*.MDX, a 3D model format used by Blizzard Entertainment in games like Warcraft 3 and Frozen Throne...
, with the full toll for SunPass
SunPass
SunPass is an electronic toll collection system in use by the State of Florida and was originally created by the Florida Department of Transportation's Florida's Turnpike...
users being $1.00 and $1.45 on the toll-by-plate program.

The expressway begins at an interchange at the Homestead Extension of the Turnpike, and goes in a northeastern direction for the entire route. Just south of the southern terminus, it crosses the first toll gantry on the route, costing $0.25 for SunPass users, and a southbound-only exit for SW 107th Avenue. It then has an interchange with Killian Parkway
Florida State Road 990
A long east–west road near Kendall, State Road 990 currently extends from an interchange between the Don Shula Expressway and West 107th Avenue to South Dixie Highway...
followed by another $0.25 toll gantry, and then an interchange with Kendall Drive before a northbound only exit with the Snapper Creek Expressway. It then hits the final toll gantry, costing $0.50 before the tollway ends with a split interchange with Bird Road and the Palmetto Expressway.

The Expressway was converted to open road tolling
Open road tolling
Open road tolling or free-flow tolling is the collection of tolls on toll roads without the use of toll booths. An electronic toll collection system is usually used instead. The major advantage to ORT is that users are able to drive through the toll plaza at highway speeds without having to slow...
on July 17, 2010, with the toll plaza being removed and all tolls being collected electronically. Those without SunPass pay a $0.15 surcharge per toll gantry on the toll-by-plate program.

The entire route is located in Miami-Dade County.