Encyclopedia
The State Fair of Texas is an annual state fair
State fair
A state fair is a competitive and recreational gathering of a U.S. state's population. It is a larger version of a county fair, often including only exhibits or competitors that have won in their categories at the more-local county fairs....
held in Dallas
Dallas, Texas
Dallas is the third-largest city in Texas and the ninth-largest in the United States. The Dallas-Fort Worth Metroplex is the largest metropolitan area in the South and fourth-largest metropolitan area in the United States...
, Texas
Texas
Texas is the second largest U.S. state by both area and population, and the largest state by area in the contiguous United States.The name, based on the Caddo word "Tejas" meaning "friends" or "allies", was applied by the Spanish to the Caddo themselves and to the region of their settlement in...
(USA
United States
The United States of America is a federal constitutional republic comprising fifty states and a federal district...
). The fair season usually begins the last Friday in September and ends 24 days later. The fair is held at the historic Fair Park
Fair Park
Dallas Fair Park is a recreational and educational complex located in Dallas, Texas . The complex is registered as a Dallas Landmark, National Historic Landmark and is home to nine museums, six performance facilities, a lagoon, and the largest Ferris wheel in North America...
where it has been held since 1886. The 2012 State Fair of Texas will run from September 28th through October 21st. Big Tex
Big Tex
Big Tex is the 52 foot tall icon of the annual State Fair of Texas held at Fair Park in Dallas, Texas. He wears size 70 boots, a 75 gallon hat, a size 100 180/181 shirt and 284W/185L XXXXXL pair of Dickies jeans...
, a 52 ft (16 m) tall cowboy
Cowboy
A cowboy is an animal herder who tends cattle on ranches in North America, traditionally on horseback, and often performs a multitude of other ranch-related tasks. The historic American cowboy of the late 19th century arose from the vaquero traditions of northern Mexico and became a figure of...
, has been the symbol of the fair since his introduction in 1952; in 1953, Big Tex's jaw was hinged, so that he appears to "speak" the announcements that promote fair events.

The State Fair of Texas is the largest state fair in the United States by annual attendance, with 2,618,500 attendees in 2010. However, the Minnesota State Fair
Minnesota State Fair
The Minnesota State Fair is the state fair of the U.S. state of Minnesota. Its slogan is "The Great Minnesota Get-Together." It is the 2nd largest fair in the United States, and the largest state fair in the United States in terms of average daily attendance, though the State Fair of Texas runs...
has a higher average daily attendance. The fair no longer tracks attendance by ticket sales — the numbers always underestimated attendance due to the practice of free entry for local schoolchildren and senior citizens on certain days — the fair's past estimates by various methods consistently suggested more than 3 million people visit the fair annually. Its 212 feet (64.6 m) Texas Star
Texas Star
Texas Star is the tallest Ferris wheel in North America. It is located at Fair Park in Dallas, Texas, and operates during the annual State Fair of Texas, where it is the most popular ride....
Ferris wheel
Ferris wheel
A Ferris wheel is a nonbuilding structure consisting of a rotating upright wheel with passenger cars attached to the rim in such a way that as the wheel turns, the cars are kept upright, usually by gravity.Some of the largest and most modern Ferris wheels have cars mounted on...
has been the largest in North America
North America
North America is a continent wholly within the Northern Hemisphere and almost wholly within the Western Hemisphere. It is also considered a northern subcontinent of the Americas...
since it debuted in October 1985, just months before the Texas Sesquicentennial. As of 2003, the fair's marketing director estimated that the fair was bringing about US$
United States dollar
The United States dollar , also referred to as the American dollar, is the official currency of the United States of America. It is divided into 100 smaller units called cents or pennies....
350 million dollars into the Dallas economy.

Traditionally, one of the centerpieces of the fair has been the annual college football
College football
College football refers to American football played by teams of student athletes fielded by American universities, colleges, and military academies, or Canadian football played by teams of student athletes fielded by Canadian universities...
game between Texas
University of Texas at Austin
The University of Texas at Austin is a state research university located in Austin, Texas, USA, and is the flagship institution of the The University of Texas System. Founded in 1883, its campus is located approximately from the Texas State Capitol in Austin...
and Oklahoma
University of Oklahoma
The University of Oklahoma is a coeducational public research university located in Norman, Oklahoma. Founded in 1890, it existed in Oklahoma Territory near Indian Territory for 17 years before the two became the state of Oklahoma. the university had 29,931 students enrolled, most located at its...
, nicknamed the Red River Shootout and played in the Cotton Bowl
Cotton Bowl (stadium)
The Cotton Bowl is a stadium which opened in 1929 and became known as "The House That Doak Built" due to the immense crowds that former SMU running back Doak Walker drew to the stadium during his college career in the late 1940s. Originally known as Fair Park Stadium, it is located in Fair Park,...
at Fair Park. Also, the State Fair Classic
State Fair Classic
The State Fair Classic is an annual college football game between the Grambling State University Tigers and the Prairie View A&M University Panthers. The game's official title is the Southwest Airlines State Fair Classic after its sponsor, Dallas-based Southwest Airlines. This game has also been...
, featuring Grambling State University
Grambling State University
Grambling State University is a historically black , public, coeducational university, located in Grambling, Louisiana. The university is the home of legendary football coach Eddie Robinson and is on the Louisiana African American Heritage Trail.-Academics:Grambling State University provides over...
and Prairie View A&M University
Prairie View A&M University
Prairie View A&M University is a historically black university located in Prairie View, Texas and is a member of the Texas A&M University System. PVAMU offers baccalaureate degrees in 50 academic majors, 37 master’s degrees and four doctoral degree programs through nine colleges and schools...
, is played at the Cotton Bowl during the fair. In 2010, Baylor and Texas Tech played their game during the State Fair for the first time. 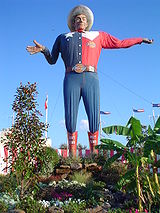 The State Fair of Texas is the only fair in the country to include a full blown auto show, dating back to 1904. It includes over 300000 square feet (27,870.9 m²) of new model vehicles, two buildings, a Truck Zone and a Test Drive Track. The State Fair has been the site for several international launches including the 1998 Chevrolet Blazer, the 2007 Chevrolet Tahoe and the 2008 Ford Sporttrac.

In recent years the fair has emphasized its reputation as an event featuring unique, albeit high-fat foods. The fair has been known for years for Fletcher's brand corny dogs. Recent years have seen the introduction of new unusual deep-fried items, including deep-fried Oreo
Oreo
Oreo is a trademark for a popular sandwich cookie by the Nabisco Division of Kraft Foods. The current design consists of a sweet, white filling commonly referred to as 'cream' or 'creme', sandwiched between two circular chocolate or golden cookie pieces....
cookies; deep-fried Twinkie
Twinkie
The Twinkie is an American snack cake made and distributed by Hostess Brands. They are marketed as a "Golden Sponge Cake with Creamy Filling".-History:...
s; deep-fried pork ribs; fried cheesecake; deep-fried butter; deep-fried peanut butter
Peanut butter
Peanut butter is a food paste made primarily from ground dry roasted peanuts, popular in North America, Netherlands, United Kingdom, and parts of Asia, particularly the Philippines and Indonesia. It is mainly used as a sandwich spread, sometimes in combination as in the peanut butter and jelly...
, jelly
Fruit preserves
Fruit preserves are preparations of fruits and sugar, often canned or sealed for long-term storage. The preparation of fruit preserves today often involves adding commercial or natural pectin as a gelling agent, although sugar or honey may be used, as well. Prior to World War II, fruit preserve...
, and banana sandwiches; and most recently a batter-based fried Coke
Fried Coke
Fried Coke is frozen Coca-Cola-flavored batter which is deep-fried and then topped with Coca-Cola syrup, whipped cream, cinnamon sugar, and a cherry. It was introduced by inventor Abel Gonzales, Jr., at the 2006 State Fair of Texas where it won the title of "Most Creative" in the second annual...
. New foods in 2008 included chicken fried bacon
Chicken fried bacon
Chicken fried bacon consists of bacon strips dredged in batter and deep fried, like chicken fried steak. It is an American dish that was introduced in Texas in the early 1990s...
and fried banana splits. The State Fair of Texas chose "Ignite Your Senses!" as the 2008 theme. In 2010, Amateur chef Mark Zable introduced deep-fried beer, which won "Most Creative", while Texas Fried Frito Pie won "Best Taste".

Most local schools and some businesses give their students/employees a day off during the fair so that everyone may enjoy the festivities together. This is an excused absence by participating schools and businesses. The date most companies and schools choose for this day is usually the second Monday in October.