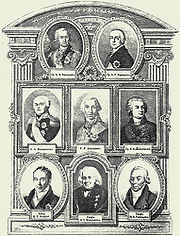 The early Russia
Russia
Russia or , officially known as both Russia and the Russian Federation , is a country in northern Eurasia. It is a federal semi-presidential republic, comprising 83 federal subjects...
n system of government instituted by Peter the Great
Peter I of Russia
Peter the Great, Peter I or Pyotr Alexeyevich Romanov Dates indicated by the letters "O.S." are Old Style. All other dates in this article are New Style. ruled the Tsardom of Russia and later the Russian Empire from until his death, jointly ruling before 1696 with his half-brother, Ivan V...
, which consisted of various state committees, each named Collegium
Collegium (ministry)
The collegia were government departments in Imperial Russia, established in 1717 by Peter the Great...
with subordinate departments named Prikaz
Prikaz
Prikaz was an administrative or judicial office in Muscovy and Russia of 15th-18th centuries. The term is usually translated as "ministry", "office" or "department". In modern Russian "prikaz" means administrative or military order...
, was largely outdated by the 19th century. The responsibilities of the Collegia were chosen very randomly and often overlapped.

The reforms proposed by Speransky were to introduce a parliament and a State Council
State Council of Imperial Russia
The State Council was the supreme state advisory body to the Tsar in Imperial Russia.-18th century:Early Tsars' Councils were small and dealt primarily with the external politics....
as legislative and executive bodies of the Tsar and to relieve the Governing Senate
Governing Senate
The Governing Senate was a legislative, judicial, and executive body of Russian Monarchs, instituted by Peter the Great to replace the Boyar Duma and lasted until the very end of the Russian Empire. It was chaired by the Ober-Procurator...
of these functions, transforming it to a kind of Supreme Court
Supreme court
A supreme court is the highest court within the hierarchy of many legal jurisdictions. Other descriptions for such courts include court of last resort, instance court, judgment court, high court, or apex court...
. Speransky even prepared the Constitution project. The reform was stopped by 1810 because of the Napoleonic wars
Napoleonic Wars
The Napoleonic Wars were a series of wars declared against Napoleon's French Empire by opposing coalitions that ran from 1803 to 1815. As a continuation of the wars sparked by the French Revolution of 1789, they revolutionised European armies and played out on an unprecedented scale, mainly due to...
and growing resistance from conservative nobility, as voiced by Nikolai Karamzin.