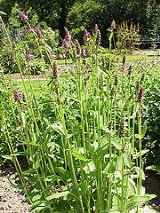 Encyclopedia
Stachys affinis, the Chinese artichoke, chorogi, knotroot, artichoke betony, or crosne, is an herbaceous
Herbaceous
A herbaceous plant is a plant that has leaves and stems that die down at the end of the growing season to the soil level. They have no persistent woody stem above ground...
perennial plant
Perennial plant
A perennial plant or simply perennial is a plant that lives for more than two years. The term is often used to differentiate a plant from shorter lived annuals and biennials. The term is sometimes misused by commercial gardeners or horticulturalists to describe only herbaceous perennials...
of the family Lamiaceae
Lamiaceae
The mints, taxonomically known as Lamiaceae or Labiatae, are a family of flowering plants. They have traditionally been considered closely related to Verbenaceae, but in the 1990s, phylogenetic studies suggested that many genera classified in Verbenaceae belong instead in Lamiaceae...
. Its tuber
Tuber
Tubers are various types of modified plant structures that are enlarged to store nutrients. They are used by plants to survive the winter or dry months and provide energy and nutrients for regrowth during the next growing season and they are a means of asexual reproduction...
can be grown as a root vegetable
Root vegetable
Root vegetables are plant roots used as vegetables. Here "root" means any underground part of a plant.Root vegetables are generally storage organs, enlarged to store energy in the form of carbohydrates. They differ in the concentration and the balance between sugars, starches, and other types of...
. While the plant is easy to grow, the tubers are small, convoluted, and indented, so they are difficult to cook. The thin skin is of a whitish-brown or ivory
Ivory
Ivory is a term for dentine, which constitutes the bulk of the teeth and tusks of animals, when used as a material for art or manufacturing. Ivory has been important since ancient times for making a range of items, from ivory carvings to false teeth, fans, dominoes, joint tubes, piano keys and...
-white colour. The flesh underneath, under proper cultivation, is white and tender. Chinese poets compare it to jade
Jade
Jade is an ornamental stone.The term jade is applied to two different metamorphic rocks that are made up of different silicate minerals:...
beads. It is in season generally commencing with October.

The flavor of the tuber
Tuber
Tubers are various types of modified plant structures that are enlarged to store nutrients. They are used by plants to survive the winter or dry months and provide energy and nutrients for regrowth during the next growing season and they are a means of asexual reproduction...
s is delicate, and they can be prepared similarly to Jerusalem artichoke
Jerusalem artichoke
The Jerusalem artichoke , also called the sunroot, sunchoke, earth apple or topinambour, is a species of sunflower native to eastern North America, and found from Eastern Canada and Maine west to North Dakota, and south to northern Florida and Texas...
s in cooking. It is used as a vegetable, in salad compositions, but more so as a garnish. It has a nutty, artichoke
Artichoke
-Plants:* Globe artichoke, a partially edible perennial thistle originating in southern Europe around the Mediterranean* Jerusalem artichoke, a species of sunflower with an edible tuber...
-like flavor.

In China, the Chinese artichoke is used primarily for pickling
Pickling
Pickling, also known as brining or corning is the process of preserving food by anaerobic fermentation in brine to produce lactic acid, or marinating and storing it in an acid solution, usually vinegar . The resulting food is called a pickle. This procedure gives the food a salty or sour taste...
. Its tuber is a part of Osechi
Osechi
Osechi-ryōri are traditional Japanese New Year foods. The tradition started in the Heian Period . Osechi are easily recognizable by their special boxes called jūbako , which resemble bentō boxes...
cooked for celebrating Japanese New Year
Japanese New Year
The is one of the most important annual festivals, with its own unique customs, and has been celebrated for centuries. Due to the importance of the holiday and the preparations required, the preceding days are quite busy, particularly the day before, known as Ōmisoka.The Japanese New Year has been...
. Dyed red by leaves of red shiso
Perilla
Perilla is the common name of the herbs of the genus Perilla of the mint family, Lamiaceae. In mild climates, the plant reseeds itself. There are both green-leafed and purple-leafed varieties, which are generally recognized as separate species by botanists. The leaves resemble stinging nettle...
after pickled, it is called Chorogi. In French cuisine
French cuisine
French cuisine is a style of food preparation originating from France that has developed from centuries of social change. In the Middle Ages, Guillaume Tirel , a court chef, authored Le Viandier, one of the earliest recipe collections of Medieval France...
, its cooked tuber is often served alongside dishes named japonaise or Japanese-styled.