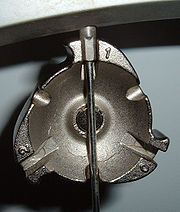 A spoke wrench or spoke key is a small wrench
Wrench
A wrench or spanner is a tool used to provide grip and mechanical advantage in applying torque to turn objects—usually rotary fasteners, such as nuts and bolts—or keep them from turning....
or tool used to adjust the tension in the spoke
Spoke
A spoke is one of some number of rods radiating from the center of a wheel , connecting the hub with the round traction surface....
s of a bicycle wheel
Bicycle wheel
A bicycle wheel is a wheel, most commonly a wire wheel, designed for bicycle. A pair is often called a wheelset, especially in the context of ready built "off the shelf" performance-oriented wheels....
, sulky
Sulky
A sulky is a lightweight cart having two wheels and a seat for the driver only but usually without a body, generally pulled by horses or dogs, and is used for harness races...
wheel, wheelchair
Wheelchair
A wheelchair is a chair with wheels, designed to be a replacement for walking. The device comes in variations where it is propelled by motors or by the seated occupant turning the rear wheels by hand. Often there are handles behind the seat for someone else to do the pushing...
wheel, or similar. A spoke wrench is sometimes called a nipple wrench, as it is the spoke nipple
Spoke nipple
A spoke nipple holds a bicycle wheel's rim to each spoke.The spoke nipple is a headed cylinder with threading on the inside through part of its length . The nipples will fit in holes in the rim, so that the head of the nipple is on the outermost part of the rim, while the other end of the nipple...
- not the spoke - that is turned in the process of changing the tension of a spoke.

Spoke nipples are typically T-shaped in cross section
Cross section (geometry)
In geometry, a cross-section is the intersection of a figure in 2-dimensional space with a line, or of a body in 3-dimensional space with a plane, etc...
, with an internal thread running part of the way through the hole that runs along the spoke nipple's principal axis. A spoke nipple rests in a hole drilled radially through the wheel's rim, and the nipple is threaded onto the external thread of a spoke. The spoke itself is fixed, at its other end, through a hole in the hub. The spoke and nipple are functionally equivalent to a bolt and a nut. However, unlike a typical nut-and-bolt pair, a spoke and nipple do not join two parts (the rim and the hub) so much as bridge them, under tension.

The area of the nipple around which the spoke wrench, or key, is fitted in use is square in cross-section. Spoke keys may be 3- or 4-sided; the latter type has a small cutout to enable it to be fitted over a spoke, after which it may be slid along to engage all four flats of the nipple. It is less likely to round off the nipple than the 3-sided type, but is slower to use.

These values for size do not indicate the interior diameter, which is critical for fitting to the spokes.

A spoke wrench is used during the creation, maintenance, or repair of spoked wheels to adjust the tension of the spokes. The goal common to these activities is to bring the wheel (nearer) to a state of true — namely, a wheel in which the rim is 1) a perfect circle concentric with the axis of the axle in the hub, and 2) planar, such that the plane of the rim is centered laterally between the two extremes of the axle where it is supported in a frame. Additionally it is to make the spoke tension as close to the same on all spokes on the same side of the wheel.

By increasing or decreasing the tension of individual spokes, or groups of spokes, around the circumference, a wheelsmith can correct for local deviations from true - e.g. wobbles, or hops.
The source of this article is wikipedia, the free encyclopedia.  The text of this article is licensed under the GFDL.