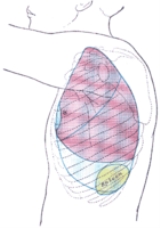 Encyclopedia
Splenomegaly is an enlargement of the spleen
Spleen
The spleen is an organ found in virtually all vertebrate animals with important roles in regard to red blood cells and the immune system. In humans, it is located in the left upper quadrant of the abdomen. It removes old red blood cells and holds a reserve of blood in case of hemorrhagic shock...
. The spleen usually lies in the left upper quadrant (LUQ) of the human abdomen. It is one of the four cardinal signs of hypersplenism, some reduction in the number of circulating blood cells affecting granulocytes, erythrocytes or platelets in any combination; a compensatory proliferative response in the bone marrow; and the potential for correction of these abnormalities by splenectomy
Splenectomy
A splenectomy is a surgical procedure that partially or completely removes the spleen.-Indications:The spleen, similar in structure to a large lymph node, acts as a blood filter. Current knowledge of its purpose includes the removal of old red blood cells and platelets, and the detection and fight...
. Splenomegaly is usually associated with increased workload (such as in hemolytic anemia
Hemolytic anemia
Hemolytic anemia is a form of anemia due to hemolysis, the abnormal breakdown of red blood cells , either in the blood vessels or elsewhere in the human body . It has numerous possible causes, ranging from relatively harmless to life-threatening...
s), which suggests that it is a response to hyperfunction. It is therefore not surprising that splenomegaly is associated with any disease
Disease
A disease is an abnormal condition affecting the body of an organism. It is often construed to be a medical condition associated with specific symptoms and signs. It may be caused by external factors, such as infectious disease, or it may be caused by internal dysfunctions, such as autoimmune...
process that involves abnormal red blood cell
Red blood cell
Red blood cells are the most common type of blood cell and the vertebrate organism's principal means of delivering oxygen to the body tissues via the blood flow through the circulatory system...
s being destroyed in the spleen. Other common causes include congestion due to portal hypertension
Portal hypertension
In medicine, portal hypertension is hypertension in the portal vein and its tributaries.It is often defined as a portal pressure gradient of 10 mmHg or greater.-Causes:Causes can be divided into prehepatic, intrahepatic, and posthepatic...
and infiltration by leukemias and lymphomas. Thus, the finding of an enlarged spleen; along with caput medusa; is an important sign of portal hypertension.

Splenomegaly is defined by Dr Abdul Ghaffar as spleen size >12 cm, as measured by ultrasound along its longer dimension.

Poulain et al. classify splenomegaly as:
Splenomegaly should not be confused with hypersplenism. The former is a statement about the size of the spleen, and the latter about the spleen's function: these may coexist, or they may not.
clinically if a spleen is palpable means it is enlarged as it has to undergo enlargement by at least two folds for being palpable. However tip of the spleen may be palpable in a newborn baby upto 3 months of age.

Symptoms may include abdominal pain
Abdominal pain
Abdominal pain can be one of the symptoms associated with transient disorders or serious disease. Making a definitive diagnosis of the cause of abdominal pain can be difficult, because many diseases can result in this symptom. Abdominal pain is a common problem...
, chest pain, chest pain similar to pleuritic pain when stomach, bladder or bowels are full, back pain, early satiety due to splenic encroachment, or the symptoms of anemia
Anemia
Anemia is a decrease in number of red blood cells or less than the normal quantity of hemoglobin in the blood. However, it can include decreased oxygen-binding ability of each hemoglobin molecule due to deformity or lack in numerical development as in some other types of hemoglobin...
due to accompanying cytopenia.

Sign
Medical sign
A medical sign is an objective indication of some medical fact or characteristic that may be detected by a physician during a physical examination of a patient....
s of splenomegaly may include a palpable left upper quadrant abdominal mass
Abdominal mass
An abdominal mass is any localized enlargement or swelling in the human abdomen. Depending on its location, the abdominal mass may be caused by an enlarged liver , enlarged spleen , protruding kidney, a pancreatic mass, a retroperitoneal mass , an abdominal aortic aneurysm, or various tumours, such...
or splenic rub. It can be detected on physical examination
Physical examination
Physical examination or clinical examination is the process by which a doctor investigates the body of a patient for signs of disease. It generally follows the taking of the medical history — an account of the symptoms as experienced by the patient...
by using Castell's sign
Castell's sign
Castell's sign is a medical sign assessed to evaluate splenomegaly and typically part of an abdominal examination. It is an alternative physical examination maneuver to percussion over Traube's space....
or Traube's space
Traube's space
Traube's space is an anatomic region of some clinical importance. It's a crescent-shaped space, encompassed by the lower edge of the left lung, the anterior border of the spleen, the left costal margin and the inferior margin of the left lobe of the liver...
, but an ultrasound
Ultrasound
Ultrasound is cyclic sound pressure with a frequency greater than the upper limit of human hearing. Ultrasound is thus not separated from "normal" sound based on differences in physical properties, only the fact that humans cannot hear it. Although this limit varies from person to person, it is...
can be used to confirm diagnosis.

The most common causes of splenomegaly in developed countries are infectious mononucleosis
Infectious mononucleosis
Infectious mononucleosis is an infectious, widespread viral...
, splenic infiltration with cancer
Cancer
Cancer , known medically as a malignant neoplasm, is a large group of different diseases, all involving unregulated cell growth. In cancer, cells divide and grow uncontrollably, forming malignant tumors, and invade nearby parts of the body. The cancer may also spread to more distant parts of the...
cells from a hematological malignancy
Hematological malignancy
Hematological malignancies are the types of cancer that affect blood, bone marrow, and lymph nodes. As the three are intimately connected through the immune system, a disease affecting one of the three will often affect the others as well: although lymphoma is technically a disease of the lymph...
and portal hypertension
Portal hypertension
In medicine, portal hypertension is hypertension in the portal vein and its tributaries.It is often defined as a portal pressure gradient of 10 mmHg or greater.-Causes:Causes can be divided into prehepatic, intrahepatic, and posthepatic...
(most commonly secondary to liver disease
Liver disease
Liver disease is a broad term describing any single number of diseases affecting the liver.-Diseases:* Hepatitis, inflammation of the liver, caused mainly by various viruses but also by some poisons , autoimmunity or hereditary conditions...
) Also by Bacterial infections, such as syphilis or an infection of the heart's inner lining (endocarditis).


The causes of massive splenomegaly (>1000 g) are much fewer and include:

If the splenomegaly underlies hypersplenism, a splenectomy
Splenectomy
A splenectomy is a surgical procedure that partially or completely removes the spleen.-Indications:The spleen, similar in structure to a large lymph node, acts as a blood filter. Current knowledge of its purpose includes the removal of old red blood cells and platelets, and the detection and fight...
is indicated and will correct the hypersplenism. However, the underlying cause of the hypersplenism will most likely remain, so a thorough diagnostic workup is still indicated, as leukemia, lymphoma, and other serious disorders can cause hypersplenism and splenomegaly. After splenectomy, however, patients have an increased risk for infectious diseases.

Patients undergoing splenectomy should be vaccinated
Vaccine
A vaccine is a biological preparation that improves immunity to a particular disease. A vaccine typically contains an agent that resembles a disease-causing microorganism, and is often made from weakened or killed forms of the microbe or its toxins...
against Haemophilus influenzae
Haemophilus influenzae
Haemophilus influenzae, formerly called Pfeiffer's bacillus or Bacillus influenzae, Gram-negative, rod-shaped bacterium first described in 1892 by Richard Pfeiffer during an influenza pandemic. A member of the Pasteurellaceae family, it is generally aerobic, but can grow as a facultative anaerobe. H...
, Streptococcus pneumoniae
Streptococcus pneumoniae
Streptococcus pneumoniae, or pneumococcus, is Gram-positive, alpha-hemolytic, aerotolerant anaerobic member of the genus Streptococcus. A significant human pathogenic bacterium, S...
, and Meningococcus. They should also receive annual influenza vaccinations. Long-term prophylactic antibiotic
Antibiotic
An antibacterial is a compound or substance that kills or slows down the growth of bacteria.The term is often used synonymously with the term antibiotic; today, however, with increased knowledge of the causative agents of various infectious diseases, antibiotic has come to denote a broader range of...
s may be given in certain cases.