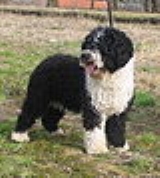 
The Spanish Water Dog or Perro de Agua Español is a breed
Dog breed
Dog breeds are groups of closely related and visibly similar domestic dogs, which are all of the subspecies Canis lupus familiaris, having characteristic traits that are selected and maintained by humans, bred from a known foundation stock....
of dog
Dog
The domestic dog is a domesticated form of the gray wolf, a member of the Canidae family of the order Carnivora. The term is used for both feral and pet varieties. The dog may have been the first animal to be domesticated, and has been the most widely kept working, hunting, and companion animal in...
developed by the shepherds in Spain
Spain
Spain , officially the Kingdom of Spain languages]] under the European Charter for Regional or Minority Languages. In each of these, Spain's official name is as follows:;;;;;;), is a country and member state of the European Union located in southwestern Europe on the Iberian Peninsula...
as a multi-purpose herder
Herding dog
A herding dog, also known as a stock dog or working dog, is a type of pastoral dog that either has been trained in herding or belongs to breeds developed for herding...
who was also used sometimes as a gundog, as well as an assistant to fishermen.

The SWD is a medium size, athletic, robust dog that is slightly longer than tall. Their tails are usually docked in the US, but undocked tails are not a fault in conformation show
Conformation show
Conformation shows, also referred to as breed shows, are a kind of dog show in which a judge familiar with a specific dog breed evaluates individual purebred dogs for how well the dogs conform to the established breed type for their breed, as described in a breed's individual breed standard.A...
ing if the dog was bred in a non-docking country.

The head should be strong and carried with elegance. The skull is flat and the top is parallel with the top of the muzzle. The nose, eye-rims and paw pads are the same colour as the darkest part of the coat or darker. The eyes are expressive and set fairly wide apart. They should be hazel, chestnut or dark brown in color, depending on the coat colour. The ears are set at medium height on the skull, and are triangular.

It has a distinctive curly coat which is woolly in texture and may form cords when long. The coat should not be clipped or groomed for aesthetic purposes. Instead, it should look entirely natural, as though it is not groomed at all. It should never be trimmed, but sheared down at least once a year. SWD puppies are always born with curly hair.

The SWD can be seen in a variety of colours. It may be black, beige, brown, white or bicolour where the second colour is white (brown and white or black and white). Tri-coloured dogs are strictly prohibited by the currently held (worldwide) standards for the breed as are black and tan or brown and tan colour combinations

The Spanish Water Dog is a medium-sized dog. The approximate measurements are:


The spanish water dog is a loving and affectionate dog. They are.great with families with small children 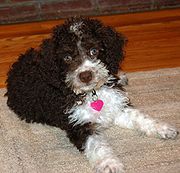 The breed's life expectancy is about 14 years. Recent health testing has uncovered the following issues:

There are many different theories as to its origin and history. Records suggest water dogs have been around the main wetlands of the Iberian Peninsula since ancient times. Portuguese and Spanish water dogs are clearly related and have a common ancestor. The SWD was also known by many other names such as, "Perro Turco", "Laneto", "Perro Patero", "Perro Rizado", "Churro", "Barbeta" and most recently "Perro de Agua Español".

In Southern Spain (Andalusia
Andalusia
Andalusia is the most populous and the second largest in area of the autonomous communities of Spain. The Andalusian autonomous community is officially recognised as a nationality of Spain. The territory is divided into eight provinces: Huelva, Seville, Cádiz, Córdoba, Málaga, Jaén, Granada and...
) the SWD was often called the "Andalusian Turk" and some thought the breed came with Turkish sheep boats, but this is very unlikelly since originally there were three separated populations of SWD in Spain with somewhat different phenotypes and sizes. One of these populations was found in Northern Spain, in Asturias
Asturias
The Principality of Asturias is an autonomous community of the Kingdom of Spain, coextensive with the former Kingdom of Asturias in the Middle Ages...
and Cantabria
Cantabria
Cantabria is a Spanish historical region and autonomous community with Santander as its capital city. It is bordered on the east by the Basque Autonomous Community , on the south by Castile and León , on the west by the Principality of Asturias, and on the north by the Cantabrian Sea.Cantabria...
, these dogs were usually smaller and of lighter color, becoming a new breed 22 March 2011, the Cantabrian Water Dog
Cantabrian Water Dog
The Cantabrian Water Dog or Perro de Agua Cantábrico is a breed of dog developed in the coast of Cantabria, northern Spain, as an assistant to fishermen...
. The other group could be found in the marshes of western Andalusia, this type of dogs had coats made of long and thin cords. And finally the largest group came from the southern Andalusian sierras, this type of dogs were the largest and strongest since were mainly used for herding. Today the breed is well mixed and most SWD are well rounded and have a balanced of traits.

Regardless of its exact origin, it is documented that there was a wooly coated Shepherd Dog on the Iberian Peninsula around 1100 AD. What is then for sure is that this a very ancient and rustic breed, very well adapated to the climate and terrain conditions found in the wetlands and coastal mountains of the Spanish shores.

Historically, the SWD were primarily used as Herding dog
Herding dog
A herding dog, also known as a stock dog or working dog, is a type of pastoral dog that either has been trained in herding or belongs to breeds developed for herding...
s to move the flocks of sheep and goats from one pasture to another. The dogs were also called upon to work wherever a dog was required. For example, they were taught to work with fishermen as well as being taught to retrieve when hunting with the farmers.

Revival of the breed 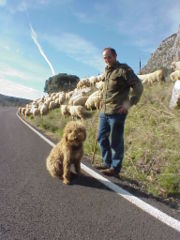 In about 1975, two enthusiasts, Antonio García Pérez and Santiago Montesinos travelled around the countryside of Southern Spain, through the remote villages and farms of the mountainous region of Andalusia
Andalusia
Andalusia is the most populous and the second largest in area of the autonomous communities of Spain. The Andalusian autonomous community is officially recognised as a nationality of Spain. The territory is divided into eight provinces: Huelva, Seville, Cádiz, Córdoba, Málaga, Jaén, Granada and...
and bought or borrowed a number of dogs from the shepherds that they felt most fit the type they were looking for to establish a breeding program.

In 1980 the Spanish Water Dog Club (Spain) was formed in order to promote the breed and help get it recognized in its own country.

The SWD was officially recognized in the United States by the United Kennel Club
United Kennel Club
The United Kennel Club is the second oldest all-breed registry of purebred dog pedigrees in the United States and the second largest in the world. According to the website, the club records 250,000 registrations annually. The UKC is not part of the International Canine Organisation, Fédération...
in 2001 and fully accepted for conformation events in 2004. Jerry and Ken Mann were instrumental in facilitating recognition in UKC. They presented the first SWD to be shown in an AKC Rare Breed Conformation venue in Inverness, Florida in January 2000. They presented an Introduction Seminar at a UKC venue in South Carolina in 2001 and showed the first SWD at a UKC Mult-Breed show in the Summer of 2004. They spearheaded the first International SWD discussion list and were the first owners to use their SWD for herding in the United States. They brought the natural ability and historic value of herding to the fore.

The Canadian Kennel Clubs Listed and Miscellaneous Breeds was amended to include the Spanish Water Dog as a listed breed effective September 1, 2008.
The source of this article is wikipedia, the free encyclopedia.  The text of this article is licensed under the GFDL.