Encyclopedia
Spa is a municipality
Municipality
A municipality is essentially an urban administrative division having corporate status and usually powers of self-government. It can also be used to mean the governing body of a municipality. A municipality is a general-purpose administrative subdivision, as opposed to a special-purpose district...
of Belgium
Belgium
Belgium , officially the Kingdom of Belgium, is a federal state in Western Europe. It is a founding member of the European Union and hosts the EU's headquarters, and those of several other major international organisations such as NATO.Belgium is also a member of, or affiliated to, many...
. It lies in the country's Walloon Region and Province of Liège
Liège (province)
Liège is the easternmost province of Belgium and belongs to the Walloon Region. It is an area of French and German ethnicity. It borders on the Netherlands, Germany, Luxembourg, and in Belgium the provinces of Luxembourg, Namur, Walloon Brabant , and those of Flemish Brabant and Limburg . Its...
. It is situated in a valley in the Ardennes
Ardennes
The Ardennes is a region of extensive forests, rolling hills and ridges formed within the Givetian Ardennes mountain range, primarily in Belgium and Luxembourg, but stretching into France , and geologically into the Eifel...
mountain chain, some 35 km (21.7 mi) southeast of Liège, and 45 km (28 mi) southwest of Aachen
Aachen
Aachen has historically been a spa town in North Rhine-Westphalia, Germany. Aachen was a favoured residence of Charlemagne, and the place of coronation of the Kings of Germany. Geographically, Aachen is the westernmost town of Germany, located along its borders with Belgium and the Netherlands, ...
. As of 1 January 2006, Spa had a total population of 10,543. The total area is 39.85 km² (15 sq mi), giving a population density
Population density
Population density is a measurement of population per unit area or unit volume. It is frequently applied to living organisms, and particularly to humans...
of 265 inhabitants per km². 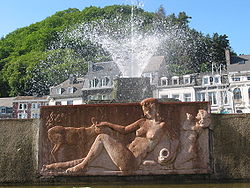 As the famed site of healing hot spring
Hot spring
A hot spring is a spring that is produced by the emergence of geothermally heated groundwater from the Earth's crust. There are geothermal hot springs in many locations all over the crust of the earth.-Definitions:...
s, Spa has been frequented as a watering-place since as early as the 14th century. Though other sources of healing hot mineral springs have become famous throughout the world, it is the town of Spa which has become eponym
Eponym
An eponym is the name of a person or thing, whether real or fictitious, after which a particular place, tribe, era, discovery, or other item is named or thought to be named...
ous with any place having a natural water source that is believed to possess special health-giving properties, as a spa
Spa
The term spa is associated with water treatment which is also known as balneotherapy. Spa towns or spa resorts typically offer various health treatments. The belief in the curative powers of mineral waters goes back to prehistoric times. Such practices have been popular worldwide, but are...
.

In 1918, the German Army
German Army
The German Army is the land component of the armed forces of the Federal Republic of Germany. Following the disbanding of the Wehrmacht after World War II, it was re-established in 1955 as the Bundesheer, part of the newly formed West German Bundeswehr along with the Navy and the Air Force...
established its principal Headquarters in Spa, and it was from here that the delegates set out for the French lines to meet Marshal Foch
Ferdinand Foch
Ferdinand Foch , GCB, OM, DSO was a French soldier, war hero, military theorist, and writer credited with possessing "the most original and subtle mind in the French army" in the early 20th century. He served as general in the French army during World War I and was made Marshal of France in its...
and sue for peace in the consultations leading up to the Armistice
Armistice with Germany (Compiègne)
The armistice between the Allies and Germany was an agreement that ended the fighting in the First World War. It was signed in a railway carriage in Compiègne Forest on 11 November 1918 and marked a victory for the Allies and a complete defeat for Germany, although not technically a surrender...
which ended the First World War. In July 1920 it hosted the meeting of the Supreme Council
Supreme War Council
The Supreme War Council was a central command created by British Prime Minister David Lloyd George to coordinate Allied military strategy during World War I. It was founded in 1917, and was based in Versailles...
. German delegates were invited to this to discuss war reparations
War reparations
War reparations are payments intended to cover damage or injury during a war. Generally, the term war reparations refers to money or goods changing hands, rather than such property transfers as the annexation of land.- History :...
.

The town is perhaps best known today as home to the Circuit de Spa-Francorchamps
Circuit de Spa-Francorchamps
The Circuit de Spa-Francorchamps is the venue of the Formula One Belgian Grand Prix and the Spa 24 Hours endurance race. It is also home to the all Volkswagen club event, 25 Hours of Spa, run by the Uniroyal Fun Cup. It is one of the most challenging race tracks in the world, mainly due to its...
, which hosts the annual Formula One
Formula One
Formula One, also known as Formula 1 or F1 and referred to officially as the FIA Formula One World Championship, is the highest class of single seater auto racing sanctioned by the Fédération Internationale de l'Automobile . The "formula" designation in the name refers to a set of rules with which...
Belgian Grand Prix
Belgian Grand Prix
The Belgian Grand Prix is an automobile race, part of the Formula One World Championship....
. It is also the location of mineral water producer Spa
Spa (mineral water)
Spa is a brand of mineral water from Spa, Belgium, and is owned by the Spadel Group. Spa mineral water has been bottled since the end of the 16th century and is very common in Western Europe and especially in the Benelux countries and Germany but is also exported to other parts of the world. Spa...
.

Spa is twinned
Town twinning
Twin towns and sister cities are two of many terms used to describe the cooperative agreements between towns, cities, and even counties in geographically and politically distinct areas to promote cultural and commercial ties.- Terminology :...
with: