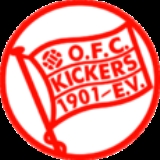 Encyclopedia
Kickers Offenbach is a German association football club
Football in Germany
Association football is the most popular sport in Germany. The German Football Association is the sport's national governing body, with 6.6 million members organized in over 26,000 football clubs. There is a league system, with the 1. and 2. Bundesliga on top, and the winner of the first...
in Offenbach am Main, Hesse
Hesse
Hesse or Hessia is both a cultural region of Germany and the name of an individual German state.* The cultural region of Hesse includes both the State of Hesse and the area known as Rhenish Hesse in the neighbouring Rhineland-Palatinate state...
. The club was founded on 27 May 1901 in the Rheinischer Hof restaurant by footballers who had left established local clubs including Melitia, Teutonia, Viktoria, Germania and Neptun. From 1921 to 1925 they were united with VfB 1900 Offenbach
VfB 1900 Offenbach
VfB Offenbach is a German association football club from the city of Offenbach am Main, Hesse. Currently playing in the Kreisliga A , the team was a second division side during World War II and appeared for a single season in the Gauliga Hessen-Nassau .-History:The club was established on 25 May...
as VfR Kickers Offenbach until resuming their status the separate side Offenbacher FC Kickers.

The club became one of the founding members of the Nordkreis-Liga
Nordkreis-Liga
The Nordkreis-Liga was the highest association football league in the German Grand Duchy of Hesse and the Prussian province of Hesse-Nassau from 1909 to 1918...
in 1909, where it played until the outbreak of the war. In post-First World War Germany, Kickers played in the Kreisliga Südmain
Kreisliga Südmain
The Kreisliga Südmain was the highest association football league in parts of the German state of Hesse from 1919 to 1923. The league was disbanded with the introduction of the Bezirksliga Main in 1923....
(I), winning this league in 1920, 1922 and 1923.

The club played as a mid-table side in the Bezirksliga Main-Hessen
Bezirksliga Main-Hessen
The Bezirksliga Main-Hessen was the highest association football league in the German state of Hesse and the Prussian province of Hesse-Nassau from 1927 to 1933...
through the late 1920s and early 1930s. German football was re-organized in 1933 under the Third Reich into sixteen first division Gauligen. Kickers joined the Gauliga Südwest, where the team immediately captured the title and entered the national playoffs for the first time. They fared poorly there, but did manage to raise their overall level of play in the following seasons, going on to win five consecutive divisional championships from 1940 to 1944.

In the early 1940s the Gauliga Südwest had been split into the Gauliga Westmark and the Gauliga Hessen-Nassau, where Kickers played. Their best post-season result came in 1942 when the team was able to advance as far as the semi-finals in the national championship rounds before they were decisively put out 0:6 by Schalke 04, who were on their way to their sixth championship as the era's most dominant side. By 1944, Allied armies were rolling through Germany and the Gauliga Hessen-Nassau did not play the 1944–45 season.


Entry to the Bundesliga and scandal

The club found itself in the new Regionalliga Süd
Regionalliga Süd (1963-74)
The Regionalliga Süd was the second-highest level of the German football league system. It existed in the south of Germany from 1963 until the formation of the 2nd Bundesliga in 1974. It covered the three states of Bavaria, Baden-Württemberg and Hessen....
(II) and play in the Bundesliga would have to wait until 1968. The team was immediately relegated, but returned to the upper league for play in 1970–71. In addition to their return to the Bundesliga, the club would win its one of its few honours in 1970 with a 2:1 German Cup victory over 1. FC Köln
1. FC Köln
1. FC Köln is a German association football club based in Cologne, North Rhine-Westphalia. It was formed in 1948 as a merger of the clubs Kölner Ballspiel-Club 1901 and SpVgg Sülz 07....
.

However, the end of the 1971 season would find Kickers Offenbach at the centre of the Bundesliga scandal
Bundesliga scandal (1971)
Bundesliga scandal refers to the malicious, for-profit manipulation of games in the 1970–71 German soccer championship season.- History :...
. The club president, Horst Canellas, went to the German Football Association
German Football Association
The German Football Association is the governing body of football in Germany. A founding member of both FIFA and UEFA, the DFB organises the German football leagues, including the national league, the Bundesliga, and the men's and women's national teams. The DFB is based in Frankfurt and is...
(Deutsche Fussball Bund or German Football Association) after being approached by a player from another team looking for a cash bonus for that club's effort in beating one of Offenbachs rivals in the fight against relegation. Receiving no help from league officials, Canellas began gathering evidence of how widespread the payoffs were. In the end more than fifty players from seven clubs, two coaches, and six game officials were found guilty of trying to influence the outcome of games through bribes, but Canellas was unable to save his club from relegation. The club central to the scandal – Arminia Bielefeld
Arminia Bielefeld
DSC Arminia Bielefeld is a German sports club from Bielefeld, North Rhine-Westphalia. Arminia offers the sports of football, field hockey, figure skating and cue sports. The club has 11,394 members and the club colours are black, white and blue...
– would not be punished until the following season, too late to save Offenbach.

The scandal had a strongly negative effect on the young league and contributed to plummeting attendance figures. One outcome of the whole affair was the further evolution of German football; salary restrictions were removed and the 2. Bundesliga
2. Fußball-Bundesliga
- Changes in division set-up :* Number of clubs: currently 18. From 1974 to 1981 there were two conferences, each of 20 teams. In 1981–91 it had 20...
also became a professional league. For the players it meant that having one's club sent down no longer also meant losing one's status as a paid professional.

Kickers would spend the next seven years in the second division before making a return to the Bundesliga for just a single season in 1983–84. In 1985, financial problems led to the club being penalized points and driven into the third division Amateur Oberliga Hessen. They recovered themselves only to be denied a license in 1989 and be sent back down again. By the mid-1990s they slipped as far as Oberliga Hessen (IV), but remained competitive. They appeared in the final of the national amateur championship in 1994 where they lost 0:1 to Preußen Münster. After a failed attempt to advance in 1998, Offenbach returned to play in the 2. Bundesliga in 1999 and were immediately sent down after a 17th place result there. In each of these seasons the team took part in the nation amateur championship winning the title in 1999.

The club next appeared in second division play in 2005. After two lower table finishes, Kickers were relegated to 3. Liga on the final day of the 2007–08 season following a 0:3 defeat to fellow strugglers VfL Osnabrück
VfL Osnabrück
VfL Osnabrück is a German multi-sport club in Osnabrück, Lower Saxony. It currently fields teams in basketball, gymnastics, swimming, table tennis, and tennis, but is by far best known for its football section.- Foundation to WW2 :...
. Despite their mixed fortunes the team remain a fan favorite and are well supported.

Past (and present) players who are the subjects of Wikipedia articles can be found here.

Kickers second team played in the Amateurliga Hessen (III) from 1971–74 until being disbanded after the 1973–74 season. The reconstituted side reappeared in the Amateuroberliga Hessen (III) in 1984, but were sent down after the relegation of the senior side from the 2. Bundesliga Süd. The amateur's last appearance of note was in the Oberliga Hessen (IV) in 1999 in a campaign that ended in relegation after a 15th place finish. In 2008–09, it returned to the Hessenliga
Hessenliga
The Hessenliga is the highest football league in the state of Hesse and the Hessian football league system. It is one of eleven Oberligas in German football, the 5th tier of the German football league system. It was, until the introduction of the 3...
and finished in fourth place.