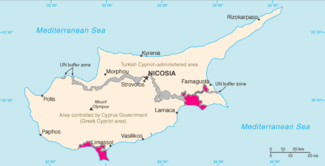 Akrotiri and Dhekelia
Akrotiri and Dhekelia
The Sovereign Base Areas of Akrotiri and Dhekelia are two British-administered areas comprising a British Overseas Territory on the island of Cyprus administered as Sovereign Base Areas of the United Kingdom...
are United Kingdom
United Kingdom
The United Kingdom of Great Britain and Northern IrelandIn the United Kingdom and Dependencies, other languages have been officially recognised as legitimate autochthonous languages under the European Charter for Regional or Minority Languages...
's Sovereign Base Areas
Sovereign Base Areas
The Sovereign Base Areas are military bases located on territory in which the United Kingdom is sovereign, but which are separated from the ordinary British territory....
(SBAs) on Cyprus
Cyprus
Cyprus , officially the Republic of Cyprus , is a Eurasian island country, member of the European Union, in the Eastern Mediterranean, east of Greece, south of Turkey, west of Syria and north of Egypt. It is the third largest island in the Mediterranean Sea.The earliest known human activity on the...
, a former British Crown Colony
Crown colony
A Crown colony, also known in the 17th century as royal colony, was a type of colonial administration of the English and later British Empire....
. The British Forces Cyprus
British Forces Cyprus
British Forces Cyprus is the name given to the British Armed Forces stationed in the UK sovereign base areas of Dhekelia and Akrotiri on the island of Cyprus...
are stationed there to defend them, and they contain a British defence radio listening post, and the only full-fledged Royal Air Force
Royal Air Force
The Royal Air Force is the aerial warfare service branch of the British Armed Forces. Formed on 1 April 1918, it is the oldest independent air force in the world...
air base in the Mediterranean region (since Gibraltar
Gibraltar
Gibraltar is a British overseas territory located on the southern end of the Iberian Peninsula at the entrance of the Mediterranean. A peninsula with an area of , it has a northern border with Andalusia, Spain. The Rock of Gibraltar is the major landmark of the region...
does not have any aircraft
Aircraft
An aircraft is a vehicle that is able to fly by gaining support from the air, or, in general, the atmosphere of a planet. An aircraft counters the force of gravity by using either static lift or by using the dynamic lift of an airfoil, or in a few cases the downward thrust from jet engines.Although...
permanently based there), called RAF Akrotiri
RAF Akrotiri
Royal Air Force Station Akrotiri, more commonly known as RAF Akrotiri , is a large Royal Air Force station, on the Mediterranean island of Cyprus. It is located in the Western Sovereign Base Area, one of two areas which comprise Akrotiri and Dhekelia, a British Overseas Territory, administered as a...
. In addition to its garrison, the United Kingdom also makes a contribution to the United Nations
United Nations
The United Nations is an international organization whose stated aims are facilitating cooperation in international law, international security, economic development, social progress, human rights, and achievement of world peace...
' peacekeeping force on Cyprus. In total, some 3,500 British personnel are based on Cyprus.

The two Sovereign Bases on Cyprus are a British overseas territory, but instead of having a Governor, like other such territories, it has an Administrator
Administrator of the Government
An Administrator in the constitutional practice of some countries in the Commonwealth is a person who fulfils a role similar to that of a Governor or a Governor-General...
, who while being appointed by the British Sovereign, is responsible to the British Ministry of Defence
Ministry of Defence (United Kingdom)
The Ministry of Defence is the United Kingdom government department responsible for implementation of government defence policy and is the headquarters of the British Armed Forces....
, not to the Foreign and Commonwealth Office
Foreign and Commonwealth Office
The Foreign and Commonwealth Office, commonly called the Foreign Office or the FCO is a British government department responsible for promoting the interests of the United Kingdom overseas, created in 1968 by merging the Foreign Office and the Commonwealth Office.The head of the FCO is the...
. The Administrator is concurrently the Commander of British Forces Cyprus. Although both the United Kingdom and Cyprus are members of the European Union
European Union
The European Union is an economic and political union of 27 independent member states which are located primarily in Europe. The EU traces its origins from the European Coal and Steel Community and the European Economic Community , formed by six countries in 1958...
the SBAs in Cyprus are technically outside of the European Union.

There is a ITU
Itu
Itu is an old and historic municipality in the state of São Paulo in Brazil. The population in 2009 was 157,384 and the area is 641.68 km². The elevation is 583 m. This place name comes from the Tupi language, meaning big waterfall. Itu is linked with the highway numbered the SP-75 and are flowed...
radio call sign (radio prefix) for the Sovereign Base Area, ZC4, which is distinct from that of Cyprus (where "5B" is commonly used). For the purposes of amateur radio
Amateur radio
Amateur radio is the use of designated radio frequency spectrum for purposes of private recreation, non-commercial exchange of messages, wireless experimentation, self-training, and emergency communication...
, the two Soverign Bases are considered to be one separate entity.

The SBA covers an area of 98 square miles (253.8 km²) of Cyprus (47.5 at Akrotiri and 50.5 at Dhekelia). However, the British Government does not own all of the land. The British Ministry of Defence owns only 20 percent of the land, with 60 percent privately owned (farmland) and the remaining 20 percent of the land being SBA Crown land, including forests, roads, rivers, and the Akrotiri Salt Lake.

Some in Britain (including Winston Churchill
Winston Churchill
Sir Winston Leonard Spencer-Churchill, was a predominantly Conservative British politician and statesman known for his leadership of the United Kingdom during the Second World War. He is widely regarded as one of the greatest wartime leaders of the century and served as Prime Minister twice...
) considered the handover a short-sighted decision, since the supply lines at the Battle of the Atlantic
Second Battle of the Atlantic
The Battle of the Atlantic was the longest continuous military campaign in World War II, running from 1939 to the defeat of Germany in 1945. At its core was the Allied naval blockade of Germany, announced the day after the declaration of war, and Germany's subsequent counter-blockade. It was at its...
were stretched until the Allies
Allies
In everyday English usage, allies are people, groups, or nations that have joined together in an association for mutual benefit or to achieve some common purpose, whether or not explicit agreement has been worked out between them...
established bases in Iceland
Iceland
Iceland , described as the Republic of Iceland, is a Nordic and European island country in the North Atlantic Ocean, on the Mid-Atlantic Ridge. Iceland also refers to the main island of the country, which contains almost all the population and almost all the land area. The country has a population...
following the British occupation in 1940. However, the ports had been neglected by the Admiralty
Admiralty
The Admiralty was formerly the authority in the Kingdom of England, and later in the United Kingdom, responsible for the command of the Royal Navy...
and would not have been ready for war without considerable expenditure of time and money.