Encyclopedia
Sondershausen is a town in Thuringia
Thuringia
The Free State of Thuringia is a state of Germany, located in the central part of the country.It has an area of and 2.29 million inhabitants, making it the sixth smallest by area and the fifth smallest by population of Germany's sixteen states....
, Germany
Germany
Germany , officially the Federal Republic of Germany , is a federal parliamentary republic in Europe. The country consists of 16 states while the capital and largest city is Berlin. Germany covers an area of 357,021 km2 and has a largely temperate seasonal climate...
, capital of the Kyffhäuserkreis
Kyffhäuserkreis
The Kyffhäuserkreis is a district in the northern part of Thuringia, Germany. Neighboring districts are the districts Mansfeld-Südharz, Saalekreis und Burgenlandkreis in Saxony-Anhalt, and the districts Sömmerda, Unstrut-Hainich and Eichsfeld.-History:...
district, situated about 50 km north of Erfurt
Erfurt
Erfurt is the capital city of Thuringia and the main city nearest to the geographical centre of Germany, located 100 km SW of Leipzig, 150 km N of Nuremberg and 180 km SE of Hannover. Erfurt Airport can be reached by plane via Munich. It lies in the southern part of the Thuringian...
. On 1 December 2007, the former municipality Schernberg
Schernberg
Schernberg is a former municipality in the district Kyffhäuserkreis, in Thuringia, Germany. Since 1 December 2007, it is part of the town Sondershausen....
was incorporated by Sondershausen. 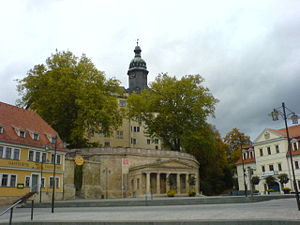 Sondershausen is situated in North Thuringia und lies in low mountain range between Hainleite (in the north) and Windleite (in the south). The highest mountain is the Frauenberg to the west of the town. A little river called Wipper flows through Sondershausen. Around the town there are mixed forests (especial with beeches).

The city districts are:

In the Sondershausen Palace
Sondershausen Palace
From an architectural and art historical point of view Sondershausen Palace can be considered as one of the most important palace complexes in Thuringia. It is an irregular four-wing complex...
there is a large museum with three different exhibit areas. Special exhibits are the Golden Coach, the only of its kind in Germany, and the legendary Püstrich.
There are possible special guided tours of demonstrationdepot, cellar, tower and park of the castle, too.

Under the city there is a mine to visit.

To visit is a Jewish bath from the 14th Century since 1999 under the gallery on the Schlossberg.


Sons and daughters of the city