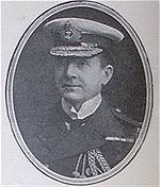 Encyclopedia
Admiral of the Fleet
Admiral of the Fleet
An admiral of the fleet is a military naval officer of the highest rank. In many nations the rank is reserved for wartime or ceremonial appointments...
Sir Somerset Arthur Gough-Calthorpe GCB
Order of the Bath
The Most Honourable Order of the Bath is a British order of chivalry founded by George I on 18 May 1725. The name derives from the elaborate mediæval ceremony for creating a knight, which involved bathing as one of its elements. The knights so created were known as Knights of the Bath...
, GCMG
Order of St Michael and St George
The Most Distinguished Order of Saint Michael and Saint George is an order of chivalry founded on 28 April 1818 by George, Prince Regent, later George IV of the United Kingdom, while he was acting as Prince Regent for his father, George III....
, CVO
Royal Victorian Order
The Royal Victorian Order is a dynastic order of knighthood and a house order of chivalry recognising distinguished personal service to the order's Sovereign, the reigning monarch of the Commonwealth realms, any members of her family, or any of her viceroys...
(1865–1937), sometimes known as Sir Somerset Calthorpe, was a British
United Kingdom
The United Kingdom of Great Britain and Northern IrelandIn the United Kingdom and Dependencies, other languages have been officially recognised as legitimate autochthonous languages under the European Charter for Regional or Minority Languages...
Royal Navy
Royal Navy
The Royal Navy is the naval warfare service branch of the British Armed Forces. Founded in the 16th century, it is the oldest service branch and is known as the Senior Service...
admiral
Admiral
Admiral is the rank, or part of the name of the ranks, of the highest naval officers. It is usually considered a full admiral and above vice admiral and below admiral of the fleet . It is usually abbreviated to "Adm" or "ADM"...
and a member of the Gough-Calthorpe family
Gough-Calthorpe family
The Gough-Calthorpe family is descended from ancient and notable families who both held lands in the area around Birmingham, England.Sir Henry Gough, 1st Baronet, Member of Parliament, was made a Baronet in the Baronetage of the United Kingdom in 1728...
.

Gough-Calthorpe joined the Royal Navy
Royal Navy
The Royal Navy is the naval warfare service branch of the British Armed Forces. Founded in the 16th century, it is the oldest service branch and is known as the Senior Service...
in 1878. He was a military attaché
Attaché
Attaché is a French term in diplomacy referring to a person who is assigned to the diplomatic or administrative staff of a higher placed person or another service or agency...
observing the actions of the Russian Imperial Navy during the Russo-Japanese War (1904–1905).

Calthorpe was promoted to Rear Admiral
Rear Admiral
Rear admiral is a naval commissioned officer rank above that of a commodore and captain, and below that of a vice admiral. It is generally regarded as the lowest of the "admiral" ranks, which are also sometimes referred to as "flag officers" or "flag ranks"...
in 1911 and commanded the 1st Battle Squadron from 1912. He commanded the 2nd Battle Cruiser
Battlecruiser
Battlecruisers were large capital ships built in the first half of the 20th century. They were developed in the first decade of the century as the successor to the armoured cruiser, but their evolution was more closely linked to that of the dreadnought battleship...
Squadron on the outbreak of the First World War. He served with the Grand Fleet under Sir John Jellicoe
John Jellicoe, 1st Earl Jellicoe
Admiral of the Fleet John Rushworth Jellicoe, 1st Earl Jellicoe, GCB, OM, GCVO was a British Royal Navy admiral who commanded the Grand Fleet at the Battle of Jutland in World War I...
until May 1916 when he moved to the Admiralty
Admiralty
The Admiralty was formerly the authority in the Kingdom of England, and later in the United Kingdom, responsible for the command of the Royal Navy...
as Second Sea Lord and Chief of Naval Personnel
Second Sea Lord
The Second Sea Lord and Commander-in-Chief Naval Home Command , commonly just known as the Second Sea Lord , is one of the most senior admirals of the British Royal Navy , and is responsible for personnel and naval shore establishments.-History:In 1805, for the first time, specific functions were...
. Calthorpe's replacement, Rear Admiral Hood
Horace Hood
Rear Admiral the Honourable Sir Horace Lambert Alexander Hood KCB, DSO, MVO was a British Royal Navy admiral of the First World War, whose lengthy and distinguished service saw him engaged in operations around the world, frequently participating in land campaigns as part of a shore brigade...
, was killed at Jutland
Battle of Jutland
The Battle of Jutland was a naval battle between the British Royal Navy's Grand Fleet and the Imperial German Navy's High Seas Fleet during the First World War. The battle was fought on 31 May and 1 June 1916 in the North Sea near Jutland, Denmark. It was the largest naval battle and the only...
when Invincible
HMS Invincible (1907)
HMS Invincible was a battlecruiser of the British Royal Navy, the lead ship of her class of three, and the first battlecruiser to be built by any country in the world. She participated in the Battle of Heligoland Bight in a minor role as she was the oldest and slowest of the British battlecruisers...
was lost with nearly all aboard.

Calthorpe served at the Admiralty until December 1916 when he was moved by the new incumbents, First Lord of the Admiralty Sir Edward Carson
Edward Carson, Baron Carson
Edward Henry Carson, Baron Carson PC, PC , Kt, QC , often known as Sir Edward Carson or Lord Carson, was a barrister, judge and politician from Ireland...
and First Sea Lord
First Sea Lord
The First Sea Lord is the professional head of the Royal Navy and the whole Naval Service; it was formerly known as First Naval Lord. He also holds the title of Chief of Naval Staff, and is known by the abbreviations 1SL/CNS...
Sir John Jellicoe
John Jellicoe, 1st Earl Jellicoe
Admiral of the Fleet John Rushworth Jellicoe, 1st Earl Jellicoe, GCB, OM, GCVO was a British Royal Navy admiral who commanded the Grand Fleet at the Battle of Jutland in World War I...
, to command the reserve fleet. In July 1917 Calthorpe was appointed to Commander-in-Chief, Mediterranean Fleet
Mediterranean Fleet
Several countries have or have had a Mediterranean Fleet in their navy. See:* Mediterranean Fleet * French Mediterranean Fleet* Mediterranean Squadron * United States Sixth Fleet...
to replace Sir Rosslyn Wemyss
Rosslyn Erskine-Wemyss, 1st Baron Wester Wemyss
Admiral of the Fleet Rosslyn Erskine Wemyss, 1st Baron Wester Wemyss GCB, CMG, MVO , known as Sir Rosslyn Wemyss between 1916 and 1919, was a British naval commander...
, who had been brought home by the new First Lord Eric Campbell Geddes
Eric Campbell Geddes
Sir Eric Campbell-Geddes GCB, GBE, PC was a British businessman and Conservative politician. He served as First Lord of the Admiralty between 1917 and 1919 and as the first Minister of Transport between 1919 and 1921....
.

Captain Somerset Arthur Calthorpe, R.N., son of Lieut-General Hon. S. J. Calthorpe, and grandson of the 6th Lord Calthorpe married Effie Dunsmuir, daughter of Hon. Robert Dunsmuir
Robert Dunsmuir
Robert Dunsmuir was a Scottish-Canadian coal miner, railway developer, industrialist and politician. -Origins in Scotland:...
, M.E.C., of "Craigdarroch Castle
Craigdarroch Castle
Craigdarroch Castle in Victoria, British Columbia, is a historic, Victorian-era Scottish Baronial mansion. The mansion was designated a National Historic Site of Canada due to its landmark status in Victoria.-Description:...
," Victoria, British Columbia
Victoria, British Columbia
Victoria is the capital city of British Columbia, Canada and is located on the southern tip of Vancouver Island off Canada's Pacific coast. The city has a population of about 78,000 within the metropolitan area of Greater Victoria, which has a population of 360,063, the 15th most populous Canadian...
, and his wife, Joanna, daughter of Alexander White, Esquire, of Kilmarnock, Scotland. The couple were married at St. George's, Hanover Square, London, England, March, 1900. Mrs. Calthorpe is a sister of Lady Musgrave and of Mrs. Chaplin
Chaplin
- People :* Charlie Chaplin , English comedy film actor and director* Chaplin , other people named Chaplin- Places :*Chaplin, Connecticut*Chaplin, Nelson County, Kentucky*Chaplin, Nova Scotia*Chaplin, Saskatchewan...
.