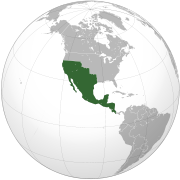 The Solemn Act of Northern America's Declaration of Independence is the first Mexican
Mexico
The United Mexican States , commonly known as Mexico , is a federal constitutional republic in North America. It is bordered on the north by the United States; on the south and west by the Pacific Ocean; on the southeast by Guatemala, Belize, and the Caribbean Sea; and on the east by the Gulf of...
legal historical document which established the separation of Mexico from Spanish rule
Spanish colonization of the Americas
Colonial expansion under the Spanish Empire was initiated by the Spanish conquistadores and developed by the Monarchy of Spain through its administrators and missionaries. The motivations for colonial expansion were trade and the spread of the Christian faith through indigenous conversions...
. It was signed on November 6, 1813, by the deputies of the Congress of Anáhuac
Congress of Chilpancingo
The Congress of Chilpancingo was a meeting held in Chilpancingo, in what is the modern-day Mexican state of Guerrero, from September to November 1813. The result of this meeting was that Mexico formally declared itself to be independent of Spain and what was later to become the first national...
, organized by General José María Morelos
José María Morelos
José María Teclo Morelos y Pavón was a Mexican Roman Catholic priest and revolutionary rebel leader who led the Mexican War of Independence movement, assuming its leadership after the execution of Miguel Hidalgo y Costilla in 1811...
in the city of Oaxaca
Oaxaca, Oaxaca
The city and municipality of Oaxaca de Juárez, or simply Oaxaca, is the capital and largest city of the Mexican state of the same name . It is located in the Centro District in the Central Valleys region of the state, in the foothills of the Sierra Madre at the base of the Cerro del Fortín...
in June of that same year, and later installed in the city of Chilpancingo
Chilpancingo
Chilpancingo de los Bravo is the capital and second-largest city of the state of Guerrero, Mexico. It is located at . In the 2005 census the population of the city was 166,796. Its surrounding municipality, of which it is municipal seat, had a population of 214,219 persons...
on September 13.

The document gathers some of the main political uprisings contained in "Feelings of the Nation" (Sentimientos de la Nación), a document of the speech Morelos gave to the representatives of the free provinces of southern New Spain on September 14.

This document indicated that given the circumstances in Europe – the occupation of Spain by the Napoleonic army
Peninsular War
The Peninsular War was a war between France and the allied powers of Spain, the United Kingdom, and Portugal for control of the Iberian Peninsula during the Napoleonic Wars. The war began when French and Spanish armies crossed Spain and invaded Portugal in 1807. Then, in 1808, France turned on its...
– Spanish America
Hispanic America
Hispanic America or Spanish America is the region comprising the American countries inhabited by Spanish-speaking populations.These countries have significant commonalities with each other and with Spain, whose colonies they formerly were...
had recovered its sovereignty from the Crown of Castile
Crown of Castile
The Crown of Castile was a medieval and modern state in the Iberian Peninsula that formed in 1230 as a result of the third and definitive union of the crowns and parliaments of the kingdoms of Castile and León upon the accession of the then King Ferdinand III of Castile to the vacant Leonese throne...
in 1808, when Ferdinand had been deposed, and therefore, any union between the overseas dominions and the Peninsula had been dissolved. This was a legal concept that was also invoked by the other declarations of independence in Spanish America, such as Venezuela
Venezuelan Declaration of Independence
The Venezuelan Declaration of Independence is a statement adopted by a congress of Venezuelan provinces on July 5, 1811 through which Venezuelans made the decision to break away from the Spanish Crown in order to establish a new nation based on the premises of equality of individuals, abolition of...
(1811) and Argentina
Argentine Declaration of Independence
What today is commonly referred as the Independence of Argentina was declared on July 9, 1816 by the Congress of Tucumán. In reality, the congressmen that were assembled in Tucumán declared the independence of the United Provinces of South America, which is still today one of the legal names of the...
(1816), which were responding to the same events. The resulting state would be a successor to the Viceroyalty of New Spain and it would preserve all of its territory in North America
North America
North America is a continent wholly within the Northern Hemisphere and almost wholly within the Western Hemisphere. It is also considered a northern subcontinent of the Americas...
(América Septentrional). The Solemn Act defined penalties for those people who contravene the insurgent war or for those who refused to give their financial support. The Act also recognized the Roman Catholic religion as the sole, official religion of the nation.

It was signed by: