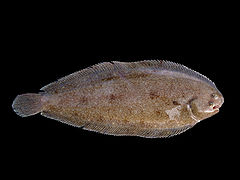 Sole is a group of flatfish
Flatfish
The flatfish are an order of ray-finned fish, also called the Heterosomata, sometimes classified as a suborder of Perciformes. In many species, both eyes lie on one side of the head, one or the other migrating through and around the head during development...
belonging to several families. Generally speaking, they are members of the family Soleidae
Soleidae
The true soles are a family, Soleidae, of flatfishes, and include species that live in salt water and fresh water. They are bottom-dwelling fishes feeding on small crustaceans and other invertebrates. Other flatfishes are also known as soles....
, but, outside Europe, the name sole is also applied to various other similar flatfish, especially other members of the sole suborder Soleoidei as well as members of the flounder family
Pleuronectidae
Righteye flounders are a family, Pleuronectidae, of flounders. They are called "righteye flounders" because most species lie on the sea bottom on their left side, with both eyes on the right side. The Paralichthyidae are the opposite, with their eyes on the left side.Their dorsal and anal fins are...
. In European cookery, there are several species which may be considered true soles, but the common or Dover sole Solea solea, often simply called the sole, is the most esteemed and most widely available.

The name sole comes from its resemblance to a sandal, Latin solea. In other languages, it is named for the tongue, e.g. German
German language
German is a West Germanic language, related to and classified alongside English and Dutch. With an estimated 90 – 98 million native speakers, German is one of the world's major languages and is the most widely-spoken first language in the European Union....
Seezunge, Spanish
Spanish language
Spanish , also known as Castilian , is a Romance language in the Ibero-Romance group that evolved from several languages and dialects in central-northern Iberia around the 9th century and gradually spread with the expansion of the Kingdom of Castile into central and southern Iberia during the...
lenguado, Turkish
Turkish language
Turkish is a language spoken as a native language by over 83 million people worldwide, making it the most commonly spoken of the Turkic languages. Its speakers are located predominantly in Turkey and Northern Cyprus with smaller groups in Iraq, Greece, Bulgaria, the Republic of Macedonia, Kosovo,...
dil.

A complete list can be found using Fishbase's
FishBase
FishBase is a comprehensive database of information about fish species . It is the largest and most extensively accessed online database on adult finfish on the web...
search function. They include:

The true sole, Solea solea, is sufficiently broadly distributed that it is not considered a threatened species; however, overfishing
Overfishing
Overfishing occurs when fishing activities reduce fish stocks below an acceptable level. This can occur in any body of water from a pond to the oceans....
in Europe has produced severely diminished populations, with declining catches in many regions. For example, the western English Channel
English Channel
The English Channel , often referred to simply as the Channel, is an arm of the Atlantic Ocean that separates southern England from northern France, and joins the North Sea to the Atlantic. It is about long and varies in width from at its widest to in the Strait of Dover...
and Irish Sea
Irish Sea
The Irish Sea separates the islands of Ireland and Great Britain. It is connected to the Celtic Sea in the south by St George's Channel, and to the Atlantic Ocean in the north by the North Channel. Anglesey is the largest island within the Irish Sea, followed by the Isle of Man...
sole fisheries face potential collapse according to data in the UK Biodiversity Action Plan
Biodiversity Action Plan
A Biodiversity Action Plan is an internationally recognized program addressing threatened species and habitats and is designed to protect and restore biological systems. The original impetus for these plans derives from the 1992 Convention on Biological Diversity...
.

Sole, along with the other major bottom-feeding fish in the North Sea
North Sea
In the southwest, beyond the Straits of Dover, the North Sea becomes the English Channel connecting to the Atlantic Ocean. In the east, it connects to the Baltic Sea via the Skagerrak and Kattegat, narrow straits that separate Denmark from Norway and Sweden respectively...
such as cod
Cod
Cod is the common name for genus Gadus, belonging to the family Gadidae, and is also used in the common name for various other fishes. Cod is a popular food with a mild flavor, low fat content and a dense, flaky white flesh. Cod livers are processed to make cod liver oil, an important source of...
, monkfish
Monkfish
Monkfish is the English name of a number of types of fish in the northwest Atlantic, most notably the species of the anglerfish genus Lophius and the angelshark genus Squatina...
, and plaice
Plaice
Plaice is the common name of four species of flatfishes.Plaice or PLAICE may also refer to:* USS Plaice , a Balao-class submarine* PLAICE, an open source hardware FLASH programmer, memory emulator, and logic analyzer...
, is listed by the ICES
Ices
Ices may refer to:*Frozen desserts, particularly within the United Kingdom*Frozen volatiles, in the context of astronomy and planetary science*Phases of iceICES may stand for:*Inflight Crew Escape System, in the Space Shuttle...
as "outside safe biological limits." Moreover, they are growing less quickly now and are rarely older than six years, although they can reach forty. World stocks of large predatory fish and large ground fish such as sole and flounder were estimated in 2003 to be only about 10% of pre-industrial levels. According to the World Wildlife Fund in 2006, "of the nine sole stocks, seven are overfished with the status of the remaining two unknown."

In 2010, Greenpeace International has added the common sole
Common sole
The common sole, Dover sole, or black sole, Solea solea, is a species of flatfish in the Soleidae family.It has a preference for relatively shallow water with sand or mud covering the bottom....
to its seafood red list. "The Greenpeace International seafood red list is a list of fish that are commonly sold in supermarkets around the world, and which have a very high risk of being sourced from unsustainable fisheries."