Soil classification deals with the systematic categorization of soil
Soil
Soil is a natural body consisting of layers of mineral constituents of variable thicknesses, which differ from the parent materials in their morphological, physical, chemical, and mineralogical characteristics...
s based on distinguishing characteristics as well as criteria that dictate choices in use. 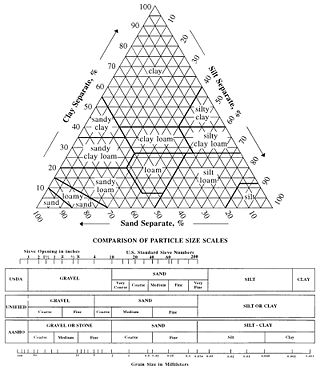 For soil resources, experience has shown that a natural system approach to classification, i.e. grouping soils by their intrinsic property (soil morphology
Soil morphology
Soil morphology is the field observable attributes of the soil within the various soil horizons and the description of the kind and arrangement of the horizons. C.F...
), behaviour, or genesis
Pedogenesis
Pedogenesis is the science and study of the processes that lead to the formation of soil ' and first explored by the Russian geologist Vasily Dokuchaev , the so called grandfather of soil science, who determined that soil formed over time as a consequence of...
, results in classes that can be interpreted for many diverse uses. Differing concepts of pedogenesis, and differences in the significance of morphological features to various land uses can affect the classification approach. Despite these differences, in a well-constructed system, classification criteria group similar concepts so that interpretations do not vary widely. This is in contrast to a technical system approach to soil classification, where soils are grouped according to their fitness for a specific use and their edaphic
Edaphic
Edaphic is a nature related to soil. Edaphic qualities may characterize the soil itself, including drainage, texture, or chemical properties such as pH. Edaphic may also characterize organisms, such as plant communities, where it specifies their relationships with soil...
characteristics.

Natural system approaches to soil classification, such as the French Soil Reference System (Référentiel pédologique français) are based on presumed soil genesis. Systems have developed, such as USDA soil taxonomy
USDA soil taxonomy
USDA Soil Taxonomy developed by United States Department of Agriculture and the National Cooperative Soil Survey provides an elaborate classification of soil types according to several parameters and in several levels: Order, Suborder, Great Group, Subgroup, Family, and Series.- Example of...
and the World Reference Base for Soil Resources
World Reference Base for Soil Resources
The World Reference Base for Soil Resources is the international standard taxonomic soil classification system endorsed by the International Union of Soil Sciences . It was developed by an international collaboration coordinated by the International Soil Reference and Information Centre and...
, which use taxonomic criteria involving soil morphology and laboratory tests to inform and refine hierarchical
Hierarchy
A hierarchy is an arrangement of items in which the items are represented as being "above," "below," or "at the same level as" one another...
classes.

Another approach is numerical classification, also called ordination
Ordination (statistics)
In multivariate analysis, ordination is a method complementary to data clustering, and used mainly in exploratory data analysis . Ordination orders objects that are characterized by values on multiple variables so that similar objects are near each other and dissimilar objects are farther from...
, where soil individuals are grouped by multivariate statistical methods such as cluster analysis. This produces natural groupings without requiring any inference about soil genesis.

In soil survey
Soil survey
Soil survey, or soil mapping, is the process of classifying soil types and other soil properties in a given area and geo-encoding such information. It applies the principles of soil science, and draws heavily from geomorphology, theories of soil formation, physical geography, and analysis of...
, as practiced in the United States
United States
The United States of America is a federal constitutional republic comprising fifty states and a federal district...
, soil classification usually means criteria based on soil morphology
Soil morphology
Soil morphology is the field observable attributes of the soil within the various soil horizons and the description of the kind and arrangement of the horizons. C.F...
in addition to characteristics developed during soil formation. Criteria are designed to guide choices in land use
Land use
Land use is the human use of land. Land use involves the management and modification of natural environment or wilderness into built environment such as fields, pastures, and settlements. It has also been defined as "the arrangements, activities and inputs people undertake in a certain land cover...
and soil management
Soil management
Soil management concerns all operations, practices and treatments used to protect soil and enhance its performance.-Practices:Soil management practices that affect soil quality:...
. As indicated, this is a hierarchical system that is a hybrid of both natural and objective criteria. USDA soil taxonomy
USDA soil taxonomy
USDA Soil Taxonomy developed by United States Department of Agriculture and the National Cooperative Soil Survey provides an elaborate classification of soil types according to several parameters and in several levels: Order, Suborder, Great Group, Subgroup, Family, and Series.- Example of...
provides the core criteria for differentiating soil map units. This is a substantial revision of the 1938 USDA soil taxonomy
1938 USDA soil taxonomy
The 1938 USDA soil taxonomy was a soil classification system adopted by the United States Department of Agriculture, now obsolete. The classification system used previously was developed and published in 1936 by C.F. Marbut, who was chief of the U.S. Soil Survey at that time. A drastic...
which was a strictly natural system. Soil taxonomy based soil map units are additionally sorted into classes based on technical classification systems. Land Capability Classes
Land use capability map
Land use capability maps are maps created to represent the potential uses of a "unit" of land. They are measured using various indicators, although the most common are five physical factors...
, hydric soil
Hydric soil
A hydric soil is a soil that formed under conditions of saturation, flooding, or ponding long enough during the growing season to develop anaerobic conditions in the upper part....
, and prime farmland
Prime farmland
Prime farmland is a designation assigned by U.S. Department of Agriculture defining land that has the best combination of physical and chemical characteristics for producing food, feed, forage, fiber, and oilseed crops and is also available for these land uses....
are some examples.

In addition to scientific soil classification systems, there are also vernacular
Vernacular
A vernacular is the native language or native dialect of a specific population, as opposed to a language of wider communication that is not native to the population, such as a national language or lingua franca.- Etymology :The term is not a recent one...
soil classification systems. Folk taxonomies have been used for millennia, while scientifically based systems are relatively recent developments.