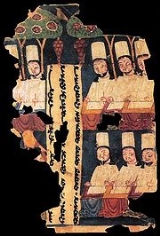 Encyclopedia
The Sogdian language is a Middle Iranian language that was spoken in Sogdiana
Sogdiana
Sogdiana or Sogdia was the ancient civilization of an Iranian people and a province of the Achaemenid Empire, eighteenth in the list on the Behistun Inscription of Darius the Great . Sogdiana is "listed" as the second of the "good lands and countries" that Ahura Mazda created...
(Zarafshan River Valley), located in modern day Uzbekistan
Uzbekistan
Uzbekistan , officially the Republic of Uzbekistan is a doubly landlocked country in Central Asia and one of the six independent Turkic states. It shares borders with Kazakhstan to the west and to the north, Kyrgyzstan and Tajikistan to the east, and Afghanistan and Turkmenistan to the south....
and Tajikistan
Tajikistan
Tajikistan , officially the Republic of Tajikistan , is a mountainous landlocked country in Central Asia. Afghanistan borders it to the south, Uzbekistan to the west, Kyrgyzstan to the north, and China to the east....
(chief cities: Samarkand
Samarkand
Although a Persian-speaking region, it was not united politically with Iran most of the times between the disintegration of the Seleucid Empire and the Arab conquest . In the 6th century it was within the domain of the Turkic kingdom of the Göktürks.At the start of the 8th century Samarkand came...
, Panjakent
Panjakent
Panjakent , also spelled Panjikent, Panjekent or Penjikent, is a city in the Sughd province of Tajikistan on the Zeravshan River, with a population of 33,000 . It was once an ancient town in Sogdiana...
, Fergana
Fergana
Fergana is a city , the capital of Fergana Province in eastern Uzbekistan, at the southern edge of the Fergana Valley in southern Central Asia, cutting across the borders of Kyrgyzstan, Tajikistan, and Uzbekistan...
).

Sogdian is one of the most important Middle Iranian languages, along with Middle Persian
Middle Persian
Middle Persian , indigenously known as "Pârsig" sometimes referred to as Pahlavi or Pehlevi, is the Middle Iranian language/ethnolect of Southwestern Iran that during Sassanid times became a prestige dialect and so came to be spoken in other regions as well. Middle Persian is classified as a...
and Parthia
Parthia
Parthia is a region of north-eastern Iran, best known for having been the political and cultural base of the Arsacid dynasty, rulers of the Parthian Empire....
n. It possesses a large literary corpus. The language is usually assigned to the Northeastern branch of the Iranian languages
Iranian languages
The Iranian languages form a subfamily of the Indo-Iranian languages which in turn is a subgroup of Indo-European language family. They have been and are spoken by Iranian peoples....
. No direct evidence of an earlier version of the language ("Old Sogdian") has been found, although mention of the area in the Old Persian inscriptions means that a separate and recognisable Sogdiana existed at least since the Achaemenid era (559-323 BC). Like Khotanese Sogdian possesses a more conservative grammar
Grammar
In linguistics, grammar is the set of structural rules that govern the composition of clauses, phrases, and words in any given natural language. The term refers also to the study of such rules, and this field includes morphology, syntax, and phonology, often complemented by phonetics, semantics,...
and morphology
Morphology (linguistics)
In linguistics, morphology is the identification, analysis and description, in a language, of the structure of morphemes and other linguistic units, such as words, affixes, parts of speech, intonation/stress, or implied context...
than Middle Persian. The modern Iranian language
Yaghnobi
Yaghnobi language
The Yaghnobi language is a living East Iranian language . Yaghnobi is spoken in the upper valley of the Yaghnob River in the Zarafshan area of Tajikistan by the Yaghnobi people...
is the descendant of a variant of Sogdian.

During the Chinese Tang Dynasty
Tang Dynasty
The Tang Dynasty was an imperial dynasty of China preceded by the Sui Dynasty and followed by the Five Dynasties and Ten Kingdoms Period. It was founded by the Li family, who seized power during the decline and collapse of the Sui Empire...
Sogdian was the lingua franca
Lingua franca
A lingua franca is a language systematically used to make communication possible between people not sharing a mother tongue, in particular when it is a third language, distinct from both mother tongues.-Characteristics:"Lingua franca" is a functionally defined term, independent of the linguistic...
along the Silk Road
Silk Road
The Silk Road or Silk Route refers to a historical network of interlinking trade routes across the Afro-Eurasian landmass that connected East, South, and Western Asia with the Mediterranean and European world, as well as parts of North and East Africa...
, and the economic and political importance of the language guaranteed its survival in the first few centuries after the Islamic conquest of Sogdiana in the early eighth century AD. A dialect of Sogdian, called Yaghnobi
Yaghnobi language
The Yaghnobi language is a living East Iranian language . Yaghnobi is spoken in the upper valley of the Yaghnob River in the Zarafshan area of Tajikistan by the Yaghnobi people...
, has survived into the 21st century. It is spoken by mountain dwellers in the Yaghnob valley
Yaghnobi people
Yaghnobi people, or Yagnobian people, is the name of an isolated people who live in the Sughd province of Tajikistan in the valleys of the Yagnob, Kul and Varzob rivers. These are the last living relics of the great Sogdian nation that once inhabited most of Central Asia beyond the Oxus/Amu Darya...
.

The finding of manuscript fragments of the Sogdian language in Chinese Central Asia sparked the study of the Sogdian language. Robert Gauthiot
Robert Gauthiot
Robert Gauthiot was a French Orientalist, linguist, and explorer.He interrupted his exploration of the Pamir Mountains in July 1914 to return home to serve as a captain in the infantry during World War I. Gauthiot received the Croix de guerre before he was mortally wounded at the Second Battle of...
, (the first Buddhist Sogdian scholar) and Paul Pelliot
Paul Pelliot
Paul Pelliot was a French sinologist and explorer of Central Asia. Initially intending to enter the foreign service, Pelliot took up the study of Chinese and became a pupil of Sylvain Lévi and Édouard Chavannes....
, (who while exploring in Tun-huang, retrieved Sogdian material) began investigating the Sogdian material that Pelliot had discovered. Gauthiot published many articles based on his work with Pelliot's material, but died during the First World War. One of Gauthiot's most impressive articles was a glossary to the Sogdian text, which he was in the process of completing when he died. This work was continued by Emile Benveniste
Émile Benveniste
Émile Benveniste was a French Jewish structural linguist, semiotician, an apprentice of Antoine Meilletand his successor, who, in his later years, became enlightened by the structural view of language through the work of Ferdinand de Saussure, although he was unwilling to grasp it at first, being...
after Gauthiot's death.

Various Sogdian pieces have been found in the Turpan text corpus, by the German Turpan expeditions. These expeditions were controlled by the Museum fur Völkerkunde, in Berlin. These pieces consist almost entirely of religious works by Manichaean and Christian
Christian
A Christian is a person who adheres to Christianity, an Abrahamic, monotheistic religion based on the life and teachings of Jesus of Nazareth as recorded in the Canonical gospels and the letters of the New Testament...
writers. Most of the Sogdian religious works are from the 9th and 10th centuries.

The Tun-huang and the Turpan were the two most plentiful sites of Manichean, Buddhist, and Christian Sogdian texts. Sogdiana itself actually contained a much smaller collection of texts. These texts were business related, belonging to a minor Sogdian king, Dewashtich. These business texts dated back to the time of the Arab conquest, about 700.

Like all the writing systems employed for Middle Iranian languages, the Sogdian script ultimately derives from the Aramaic script. Like its close relative the Pahlavi writing system, written Sogdian contains many logograms or ideograms, which were Aramaic words written to represent native spoken ones. The Sogdian script is the direct ancestor of the Uyghur
Uyghur language
Uyghur , formerly known as Eastern Turk, is a Turkic language with 8 to 11 million speakers, spoken primarily by the Uyghur people in the Xinjiang Uyghur Autonomous Region of Western China. Significant communities of Uyghur-speakers are located in Kazakhstan and Uzbekistan, and various other...
script, itself the forerunner of the Mongolian script
Mongolian script
The classical Mongolian script , also known as Uyghurjin, was the first writing system created specifically for the Mongolian language, and was the most successful until the introduction of Cyrillic in 1946...
.

As in other writing systems descended from the Semitic script
History of the alphabet
The origins of the alphabet are unknown, but there are several theories as to how it developed. One popular proposal — the Proto-Sinaitic theory — is that the history of the alphabet began in Ancient Egypt, more than a millennium into the history of writing...
, there are no special signs for vowels. As in the parent Aramaic system, the consonantal signs ’ y w can stand for the long vowels [a: i: u:] respectively. However, unlike it, these consonant signs would also sometimes serve to express the short vowels (which could also sometimes be left unexpressed, as they always are in the parent systems). To distinguish long vowels from short ones, an additional aleph could be written before the sign denoting the long vowel.

The Sogdian language also used the Manichean script, which consisted of 29 letters.

In transcribing Sogdian script into Roman letters, Aramaic ideograms are often noted by means of capitals.