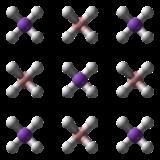 Overview
Sodium borohydride, also known as sodium tetrahydridoborate, is an inorganic compound
Inorganic compound
Inorganic compounds have traditionally been considered to be of inanimate, non-biological origin. In contrast, organic compounds have an explicit biological origin. However, over the past century, the classification of inorganic vs organic compounds has become less important to scientists,...
with the formula
Chemical formula
A chemical formula or molecular formula is a way of expressing information about the atoms that constitute a particular chemical compound....
Na
Sodium
Sodium is a chemical element with the symbol Na and atomic number 11. It is a soft, silvery-white, highly reactive metal and is a member of the alkali metals; its only stable isotope is 23Na. It is an abundant element that exists in numerous minerals, most commonly as sodium chloride...
B
Boron
Boron is the chemical element with atomic number 5 and the chemical symbol B. Boron is a metalloid. Because boron is not produced by stellar nucleosynthesis, it is a low-abundance element in both the solar system and the Earth's crust. However, boron is concentrated on Earth by the...
H
Hydrogen
Hydrogen is the chemical element with atomic number 1. It is represented by the symbol H. With an average atomic weight of , hydrogen is the lightest and most abundant chemical element, constituting roughly 75% of the Universe's chemical elemental mass. Stars in the main sequence are mainly...
4. This white solid, usually encountered as a powder, is a versatile reducing agent
Reducing agent
A reducing agent is the element or compound in a reduction-oxidation reaction that donates an electron to another species; however, since the reducer loses an electron we say it is "oxidized"...
that finds wide application in chemistry, both in the laboratory and on a technical scale. Large amounts are used for bleaching wood pulp
Pulp (paper)
Pulp is a lignocellulosic fibrous material prepared by chemically or mechanically separating cellulose fibres from wood, fibre crops or waste paper. Wood pulp is the most common raw material in papermaking.-History:...
. The compound is insoluble in ether
Diethyl ether
Diethyl ether, also known as ethyl ether, simply ether, or ethoxyethane, is an organic compound in the ether class with the formula . It is a colorless, highly volatile flammable liquid with a characteristic odor...
, and soluble in glyme solvents, methanol and water, but reacts with the latter two in the absence of base.