Early in 1989, the Protestant
Protestantism
Protestantism is one of the three major groupings within Christianity. It is a movement that began in Germany in the early 16th century as a reaction against medieval Roman Catholic doctrines and practices, especially in regards to salvation, justification, and ecclesiology.The doctrines of the...
theologians
Theology
Theology is the systematic and rational study of religion and its influences and of the nature of religious truths, or the learned profession acquired by completing specialized training in religious studies, usually at a university or school of divinity or seminary.-Definition:Augustine of Hippo...
Markus Meckel
Markus Meckel
Markus Meckel is a German theologian and politician. He was the penultimate foreign minister of the GDR and is a member of the German Bundestag.-Early life:...
and Martin Gutzeit, took the initiative to refound a Social Democrat
Social democracy
Social democracy is a political ideology of the center-left on the political spectrum. Social democracy is officially a form of evolutionary reformist socialism. It supports class collaboration as the course to achieve socialism...
party in the GDR. The two made organisational preparations and in April 1989 produced the first draft of the foundation appeal. In August, the appeal was presented at the Golgathagemeinde parish in Berlin. The appeal was signed by Meckel, Gutzeit, the director and human rights advocate Ibrahim Böhme
Ibrahim Böhme
Ibrahim Böhme was a politician for a short period of time after the collapse of the communist regime in the German Democratic Republic, also known as East Germany. Before becoming involved in politics, Böhme had worked numerous different jobs as a cook, waiter, bricklayer, teacher, and historian...
and the theologian Arndt Noack.

On 7 October 1989, forty or fifty people, mostly from Berlin and the southern parts of the county, assembled at the vicarage of Schwante, a town near Berlin
Berlin
Berlin is the capital city of Germany and is one of the 16 states of Germany. With a population of 3.45 million people, Berlin is Germany's largest city. It is the second most populous city proper and the seventh most populous urban area in the European Union...
, and founded the Social Democratic Party in the GDR. The party chose the abbreviation SDP to avoid associations with both the SPD that had merged into the SED and the West German party of that name. Stephan Hilsberg, a programmer, was elected as the first party spokesman, while Ibrahim Böhme became manager.

Between October and December, local groups of the SDP were formed in different towns. From 7 December 1989, two representatives of the party participated in the Round Table talks between the SED-led government under Hans Modrow
Hans Modrow
Hans Modrow is a German politician, best known as the last communist premier of East Germany. He currently is the honorary Chairman of the Left Party....
and various opposition groups. The talks resulted in representatives of the opposition groups joining Modrow's cabinet as ministers without portfolio
Minister without Portfolio
A minister without portfolio is either a government minister with no specific responsibilities or a minister that does not head a particular ministry...
until free elections to the People's Chamber could be held. On 29 January, Walter Romberg joined the government on behalf of the Social Democrats.
On 13 January 1990, the party's first Conference of Delegates assembled in Berlin and decided to change the short form of the party name to SPD, to conform with (and profit from association with) the West German SPD. At the same time, party organisation was created at the level of districts and regions.

Elections were scheduled for 18 March. Three weeks before that date, the SPD held its first party congress from 22 to 25 February 1990 in Leipzig
Leipzig
Leipzig Leipzig has always been a trade city, situated during the time of the Holy Roman Empire at the intersection of the Via Regia and Via Imperii, two important trade routes. At one time, Leipzig was one of the major European centres of learning and culture in fields such as music and publishing...
. The congress decided on a basic manifesto and a statute of the party and also elected an executive board, with Böhme serving as party chairman and Meckel as one of his deputies.

The election yielded disappointing results for the Social Democrats. Instead of gaining an absolute majority, as they had expected, they won 21.9% of the vote, resulting in 88 seats. The party fared best in the districts
Administrative divisions of the German Democratic Republic
The Administrative divisions of the German Democratic Republic were constituted in two different forms during the country's 41-year-long history. The Republic first retained the traditional German division into federated states called Länder, but in 1952 replaced them with arbitrarily-drawn...
of Berlin (34.9%), Potsdam (34.4%) and Frankfurt (Oder) (31.9%), and by far worst in the district of Dresden (9.7%). When the new parliament constituted itself, Social Democrat Reinhard Höppner
Reinhard Höppner
Reinhard Höppner is a German politician .He was Minister-President of Saxony-Anhalt from July 1994 until May 16, 2002, when he was succeeded by Wolfgang Böhmer.-References:...
was elected vice-president of the People's Chamber.

After internal debates the party members agreed to coalition talks with the winner of the election, the Allianz für Deutschland
Alliance for Germany
The Alliance for Germany was an opposition coalition in East Germany. It was formed on 5 February 1990 in Berlin to stand in the East-German Volkskammer elections. It consisted of the Christian Democratic Union, Democratic Awakening and the German Social Union...
, consisting of the CDU
Christian Democratic Union (East Germany)
The Christian Democratic Union of Germany ) was an East German political party founded in 1945. It was part of the National Front with the Socialist Unity Party of Germany until 1989....
, the DSU
German Social Union (East Germany)
The German Social Union is a small right-wing conservative political party active in the eastern German states since 1990. It was started as a conservative opposition group during the "Wende" in the German Democratic Republic...
and Demokratischer Aufbruch, as well as with the Bund Freier Demokraten, an alliance of liberal parties. On 12 April, Christian Democrat Lothar de Maizière
Lothar de Maizière
Lothar de Maizière is a German christian democratic politician. In 1990, he served as the only democratically elected Prime Minister of the German Democratic Republic, and as such was the last leader of an independent East Germany....
formed a cabinet including six Social Democrats, among them Markus Meckel (foreign affairs), Regine Hildebrandt
Regine Hildebrandt
Regine Hildebrandt , born as Regine Radischewski in Berlin, Germany, was a German biologist and politician . From 1959 to 1964, she studied biology at the Humboldt-Universität in Berlin.In 1978 she was awarded a doctorate for research on medicines...
(social issues) and Walter Romberg (finance). The SPD initially supported de Maizière's policy of quick union with West Germany but on 20 August 1990 they departed from the cabinet. 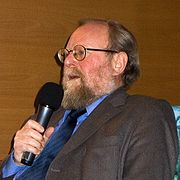 Ibrahim Böhme was not part of the new government as during the coalition talks he had been unmasked as a long-time informer of the Stasi
Stasi
The Ministry for State Security The Ministry for State Security The Ministry for State Security (German: Ministerium für Staatssicherheit (MfS), commonly known as the Stasi (abbreviation , literally State Security), was the official state security service of East Germany. The MfS was headquartered...
by the news magazine Der Spiegel
Der Spiegel
Der Spiegel is a German weekly news magazine published in Hamburg. It is one of Europe's largest publications of its kind, with a weekly circulation of more than one million.-Overview:...
. Though Böhme failed to acknowledge this, he agreed to suspend his party functions (he was later expelled from the party in 1992). On 8 April 1990, Meckel was chosen as the interim chairman, until an extraordinary meeting in Halle (Saale) on 9 June 1990 elected Wolfgang Thierse
Wolfgang Thierse
Wolfgang Thierse is a German politician .- Early years in the GDR :Thierse was born in Breslau . He is a Roman Catholic and grew up in East Germany. After his A-levels he first worked as a typesetter in Weimar...
as the new party chairman. At the same time, Willy Brandt
Willy Brandt
Willy Brandt, born Herbert Ernst Karl Frahm , was a German politician, Mayor of West Berlin 1957–1966, Chancellor of West Germany 1969–1974, and leader of the Social Democratic Party of Germany 1964–1987....
, former Chancellor of West Germany and honorary chairman of the West German SPD, was elected as honorary chairman of the East German SPD as well.

With German reunification
German reunification
German reunification was the process in 1990 in which the German Democratic Republic joined the Federal Republic of Germany , and when Berlin reunited into a single city, as provided by its then Grundgesetz constitution Article 23. The start of this process is commonly referred by Germans as die...
approaching on 3 October, 1990, the East German SPD held a final party congress on 26 September 1990, and decided to merge with the West German SPD. The following day, Wolfgang Thierse was entered the unified party's executive board and was also appointed deputy chairman. He resigned from the latter position in 2005 but remains a member of the board to this date.