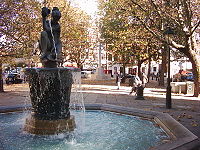 Sloane Square is a small hard-landscaped square on the boundaries of the fashionable London
London
London is the capital city of :England and the :United Kingdom, the largest metropolitan area in the United Kingdom, and the largest urban zone in the European Union by most measures. Located on the River Thames, London has been a major settlement for two millennia, its history going back to its...
districts of Knightsbridge
Knightsbridge
Knightsbridge is a road which gives its name to an exclusive district lying to the west of central London. The road runs along the south side of Hyde Park, west from Hyde Park Corner, spanning the City of Westminster and the Royal Borough of Kensington and Chelsea...
, Belgravia
Belgravia
Belgravia is a district of central London in the City of Westminster and the Royal Borough of Kensington and Chelsea. Noted for its immensely expensive residential properties, it is one of the wealthiest districts in the world...
and Chelsea
Chelsea, London
Chelsea is an area of West London, England, bounded to the south by the River Thames, where its frontage runs from Chelsea Bridge along the Chelsea Embankment, Cheyne Walk, Lots Road and Chelsea Harbour. Its eastern boundary was once defined by the River Westbourne, which is now in a pipe above...
, located 2.1 miles (3.4 km) southwest of Charing Cross
Charing Cross
Charing Cross denotes the junction of Strand, Whitehall and Cockspur Street, just south of Trafalgar Square in central London, England. It is named after the now demolished Eleanor cross that stood there, in what was once the hamlet of Charing. The site of the cross is now occupied by an equestrian...
, in the Royal Borough of Kensington and Chelsea
Royal Borough of Kensington and Chelsea
The Royal Borough of Kensington and Chelsea is a central London borough of Royal borough status. After the City of Westminster, it is the wealthiest borough in England....
. The square is part of the Hans Town area designed in 1771 by Henry Holland Snr. and Henry Holland Jnr.
Henry Holland (architect)
Henry Holland was an architect to the English nobility. Born in Fulham, London, his father also Henry ran a building firm and he built several of Capability Brown's buildings, although Henry would have learnt a lot from his father about the practicalities of construction it was under Brown that he...
Both the town and square were named after Sir Hans Sloane (1660–1753), whose heirs owned the land at the time.

The square lies at the east end of the trendy Kings Road
Kings Road
King's Road or Kings Road, known popularly as The King's Road or The KR, is a major, well-known street stretching through Chelsea and Fulham, both in west London, England...
and at the south end of the more conventionally smart Sloane Street
Sloane Street
Sloane Street is a major London street which runs north to south, from Knightsbridge to Sloane Square, crossing Pont Street about half way along, entirely in The Royal Borough of Kensington and Chelsea. Sloane Street takes its name from Sir Hans Sloane, who purchased the surrounding area in 1712...
linking to Knightsbridge
Knightsbridge
Knightsbridge is a road which gives its name to an exclusive district lying to the west of central London. The road runs along the south side of Hyde Park, west from Hyde Park Corner, spanning the City of Westminster and the Royal Borough of Kensington and Chelsea...
. In the early 1980s, it lent its name to the "Sloane Ranger
Sloane Ranger
The term Sloane Ranger refers to a stereotype in the UK of young, upper class or upper-middle-class women, or men who share distinctive and common lifestyle traits...
s", the young underemployed, often snooty and ostentatiously well-off members of the upper classes. The Square has two notable buildings: Peter Jones
Peter Jones (department store)
Peter Jones is a large, established and exclusive department store in central London. It is owned by John Lewis Partnership and located in Sloane Square, Chelsea.-History :...
department store and the Royal Court Theatre
Royal Court Theatre
The Royal Court Theatre is a non-commercial theatre on Sloane Square, in the Royal Borough of Kensington and Chelsea. It is noted for its contributions to modern theatre...
. The River Westbourne
River Westbourne
The River Westbourne is a river in London, England. It flows from Hampstead down through Hyde Park to Sloane Square and into the River Thames at Chelsea...
is carried over the tube station
Sloane Square tube station
Sloane Square is a London Underground station in Sloane Square, in the Chelsea district of The Royal Borough of Kensington and Chelsea. It is served by the District and Circle Lines and is between South Kensington and Victoria. It is in Travelcard Zone 1....
in a large iron pipe.

Sloane Square was mentioned in the 1990 Morrissey
Morrissey
Steven Patrick Morrissey , known as Morrissey, is an English singer and lyricist. He rose to prominence in the 1980s as the lyricist and vocalist of the alternative rock band The Smiths. The band was highly successful in the United Kingdom but broke up in 1987, and Morrissey began a solo career,...
song, "Hairdresser on Fire
Hairdresser on Fire
"Hairdresser on Fire" is a song by Morrissey, that originally featured as a B-side on his single "Suedehead" as well as being a bonus track on the American release of his solo debut Viva Hate. It was later featured on the compilation album Bona Drag as well.The song is based around Morrissey's...
".

It was also mentioned in the Doctor Who Serial Dalek Invasion of Earth as being close to the area where the Daleks landed their spacecraft.

In early 2005 improvements to the square were proposed, involving a change to the road layout to make it more pedestrian friendly. One option was to create a central crossroads and two open spaces in front of Peter Jones and the Royal Court. The pedestrian area leading to Pavillion Road now houses the flagship stores of many luxury brands including Brora, Links of London and Ormonde Jayne Perfumery.

This option was put out to consultation, and the results in April 2007 showed that over 65% of respondents preferred a renovation of the existing square, so the crossroads plan has been shelved.

Sloane Square Underground station
Sloane Square tube station
Sloane Square is a London Underground station in Sloane Square, in the Chelsea district of The Royal Borough of Kensington and Chelsea. It is served by the District and Circle Lines and is between South Kensington and Victoria. It is in Travelcard Zone 1....
(District
District Line
The District line is a line of the London Underground, coloured green on the Tube map. It is a "sub-surface" line, running through the central area in shallow cut-and-cover tunnels. It is the busiest of the sub-surface lines. Out of the 60 stations served, 25 are underground...
and Circle lines) is at the south eastern corner. The line crosses under the square to the north west towards South Kensington
South Kensington
South Kensington is a district in the Royal Borough of Kensington and Chelsea in London. It is a built-up area located 2.4 miles west south-west of Charing Cross....
station.

Since the public consultation of April 2007 other independent proposals have been put forward for improvement of the square.

The 'Venus Fountain' which stands in the centre of the square was constructed in 1953, designed by sculptor Gilbert Ledward
Gilbert Ledward
Gilbert Ledward RA , was an English sculptor.He won the Prix de Rome for sculpture in 1913, and in World War I served in the Royal Garrison Artillery and later as a war artist. He was professor of sculpture at the Royal College of Art and in 1937 was elected a Royal Academician...
. The fountain depicts Venus
Venus
Venus is the second planet from the Sun, orbiting it every 224.7 Earth days. The planet is named after Venus, the Roman goddess of love and beauty. After the Moon, it is the brightest natural object in the night sky, reaching an apparent magnitude of −4.6, bright enough to cast shadows...
, and on the basin section of the fountain is a relief which depicts King Charles II
Charles II of England
Charles II was monarch of the three kingdoms of England, Scotland, and Ireland.Charles II's father, King Charles I, was executed at Whitehall on 30 January 1649, at the climax of the English Civil War...
and Nell Gwynn by the Thames, which was used in relation to a house located close by that Nell Gwynn had used.

In 2006, David Lammy
David Lammy
David Lindon Lammy is a British Labour Party politician, who has been the Member of Parliament for Tottenham since 2000.Lammy has commented on Britain's history of slavery.-Early life and Education:...
put forward a proposal to have the fountain grade II listed, which was successful.