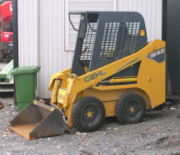 A skid loader or skid steer loader is a small rigid frame, engine-powered machine with lift arms used to attach a wide variety of labor-saving tools or attachments. Though sometimes they are equipped with tracks, skid-steer loaders are typically four-wheel drive
Four-wheel drive
Four-wheel drive, 4WD, or 4×4 is a four-wheeled vehicle with a drivetrain that allows all four wheels to receive torque from the engine simultaneously...
vehicles with the left-side drive wheels independent of the right-side drive wheels. By having each side independent of the other, wheel speed and direction of rotation of the wheels determine the direction the loader will turn.

Skid steer loaders are capable of zero-radius, "pirouette" turning, which makes them extremely maneuverable and valuable for applications that require a compact, agile loader.

A Skid Steer loader can sometimes be used in place of a large excavator
Excavator
Excavators are heavy construction equipment consisting of a boom, stick, bucket and cab on a rotating platform . The house sits atop an undercarriage with tracks or wheels. A cable-operated excavator uses winches and steel ropes to accomplish the movements. They are a natural progression from the...
by digging a hole from the inside. The skid loader first digs a ramp leading to the edge of the desired excavation. It then uses the ramp to carry material out of the hole. The skid loader reshapes the ramp making it steeper and longer as the excavation deepens. This method is particularly useful for digging under a structure where overhead clearance does not allow for the boom of a large excavator, such as digging a basement under an existing house.

The conventional bucket of many skid loaders can be replaced with a variety of specialized buckets or attachments, many powered by the loader's hydraulic system. These include backhoe
Backhoe
A backhoe, also called a rear actor or back actor, is a piece of excavating equipment or digger consisting of a digging bucket on the end of a two-part articulated arm. They are typically mounted on the back of a tractor or front loader...
, hydraulic breaker, pallet forks, angle broom, sweeper, auger
Auger
An auger is a drilling device, or drill bit, that usually includes a rotating helical screw blade called a "flighting" to act as a screw conveyor to remove the drilled out material...
, mower, snow blower
Snow blower
A snow blower or snow thrower is a machine for removing snow from an area where it is not wanted, such as a driveway, sidewalk, roadway, railroad track, rink, runway, or houses...
, stump grinder, tree spade, trencher
Trencher (machine)
A trencher is a piece of construction equipment used to dig trenches, typically for laying pipes or cables, or for drainage. Trenchers may range in size from walk-behind models, to attachments for a skid loader or tractor, to very heavy tracked heavy equipment.-Types:Trenchers come in different...
, dumping hopper, ripper, tillers, grapple, tilt, roller, snow blade, wheel saw, cement
Cement
In the most general sense of the word, a cement is a binder, a substance that sets and hardens independently, and can bind other materials together. The word "cement" traces to the Romans, who used the term opus caementicium to describe masonry resembling modern concrete that was made from crushed...
mixer, and wood chipper machine.

The first three-wheeled, front-end loader was invented by brothers Cyril and Louis Keller (manufacturer) in Rothsay, Minnesota, in 1957. The Kellers built the loader to help a farmer mechanize the process of cleaning turkey manure from his barn. The light and compact machine, with its rear caster wheel, was able to turn around within its own length, while performing the same tasks as a conventional front-end loader.

The Melroe brothers, of Melroe Manufacturing Company in Gwinner, N.D., purchased the rights to the Keller loader in 1958 and hired the Kellers to continue refining their invention. As a result of this partnership, the M-200 Melroe self-propelled loader was introduced at the end of 1958. It featured two independent front-drive wheels and a rear caster wheel, a 12.9-hp engine and a 750-lb. lift capacity. Two years later they replaced the caster wheel with a rear axle and introduced the M-400, the first four-wheel, skid-steer loader. It quickly became the Melroe Bobcat. The term "Bobcat
Bobcat (equipment)
Bobcat Company is a manufacturer of farm and construction equipment, part of Doosan Group of South Korea. Its American headquarters is in West Fargo, North Dakota, USA...
" is sometimes used as a generic term for skid-steer loaders; however, such uses are inaccurate because "Bobcat" is a brand of equipment. The M-440 was powered by a 15.5-hp engine and had an 1100-lb. rated operating capacity. Skid-steer development continued into the mid-1960s with the M600 loader.